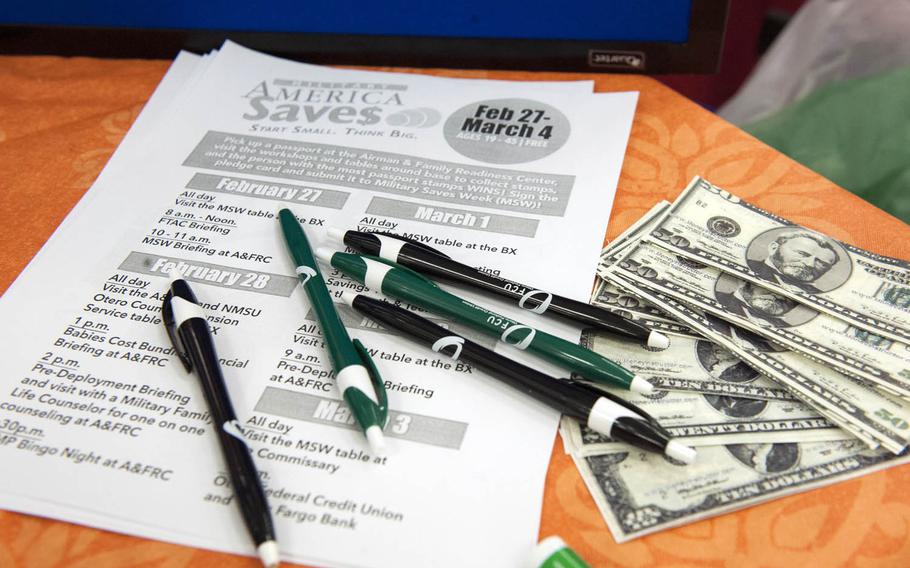 OSAN AIR BASE, South Korea — The military is partnering with more than 100 financial institutions this week to help servicemembers save some of their hard-earned pay.

During Military Saves Week, which runs through Saturday, servicemembers at installations worldwide can take part in one-on-one financial counseling sessions and receive in-depth training on the military’s new retirement system.

“If you look at savings statistics across the country, we have a crisis,” Joseph Montanaro, a military relationship director for the USAA financial services group, said Thursday in an email to Stars and Stripes. “According to the Bureau of Economic Analysis, the current savings rate is just over 5 percent. That’s just not going to get it done.”

Military Saves — a subsidiary of the nonprofit America Saves — is encouraging servicemembers and their families to sign a pledge at militarysaves.org, where they can plan, create and commit to a savings goal.

“By signing up for Military Saves, you’re formalizing a commitment to do some financial good,” Montanaro said. “For some, that could be committing to pay off debts; for others, it could mean building for the future.”

“Every third paycheck I put directly into savings, which is on top of the 15 percent of my paycheck already going toward a Roth TSP,” he said, referring to the military’s Thrift Savings Plan for retirement.

Senior airman Raquel Chaparro, 20, a Cleveland, Ohio, native stationed at Osan, said the Air Force could do a better job with financial training, especially at the start of a servicemember’s career.

“When I was at Basic Military Training, they had us take classes at the end of the day when everyone was beaten down and tired,” said Chaparro, who added she now saves half of every paycheck.

She also suggested that computer-based financial training should be tangible and interactive, not something servicemembers just click through to meet a deadline.