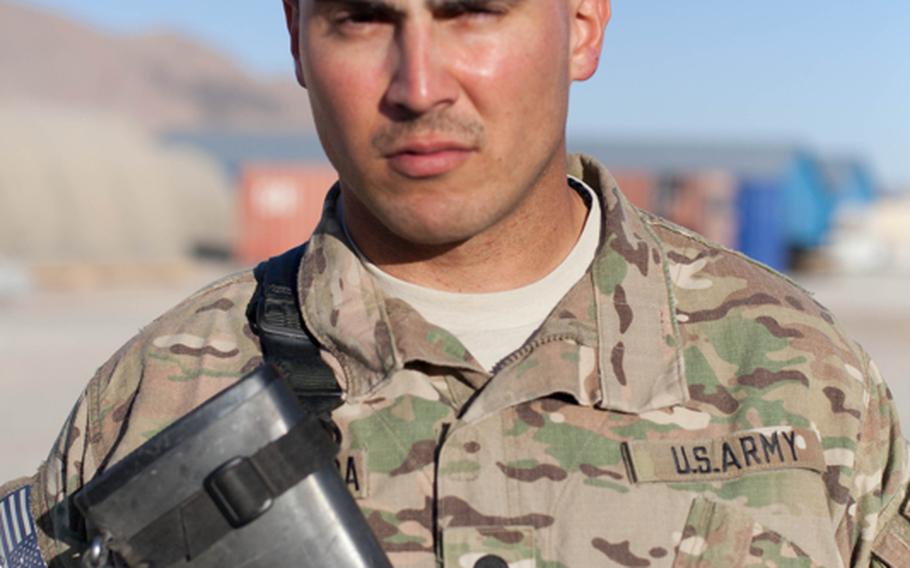 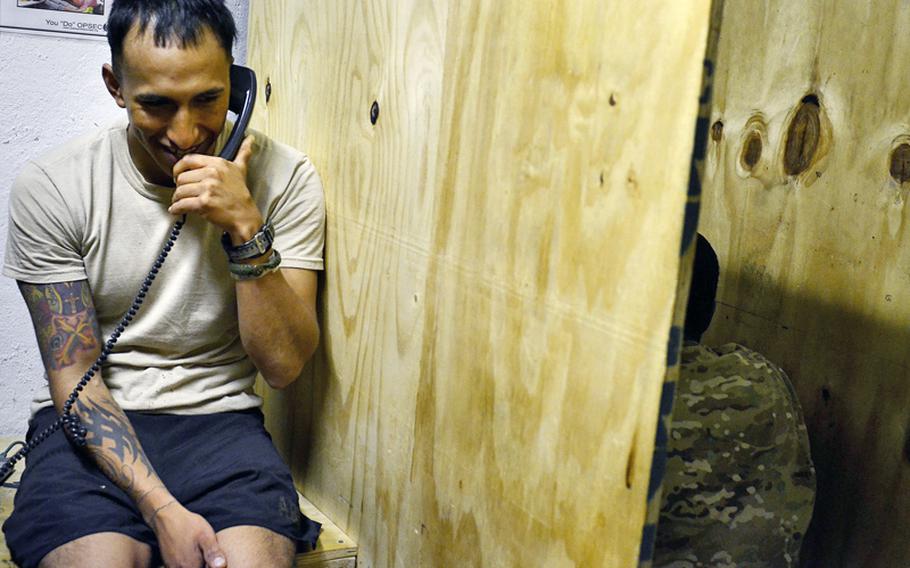 Staff Sgt. Damian Remijio calls his girlfriend in Alaska earlier this year from the Morale, Welfare and Recreation room at Combat Outpost Sabari, Khost province. MWR facilities such as these will be used by servicemembers for four days under a new rest and recreation program being rolled out. (Joshua L. DeMotts/Stars and Stripes)

The U.S. military is rolling out a new rest and recuperation program for troops fighting in Afghanistan. But don&rsquo;t pack your bags for a nice long break on a sunny beach or a visit home &mdash; you won&rsquo;t be leaving Afghanistan under the &ldquo;rest-in-place&rdquo; program.

R&R sites are being established within brigade or regional areas of operation, with a range of amenities provided by Morale, Welfare and Recreation. A four-day Special Liberty Pass is the ticket in.

&ldquo;The decentralized approach at the brigade level was chosen because it provides leadership the flexibility to design R&R programs that fit their requirements, yet takes care of servicemembers&rsquo; needs for a break close to their unit area,&rdquo; U.S. Forces Afghanistan spokesman David Lakin wrote in an email to Stripes from Kabul.

&ldquo;Unit leaders strive to give all servicemembers as much downtime as possible no matter where they are located, while providing a safe and secure environment to unwind from a taxing and difficult mission.&rdquo;

Some downrange brigade commanders and separate battalions have turned in proposals for the program, site and facilities in their areas, and they then must be certified by the regional commander, Lakin said. Most sites have been identified and some are operational. The rest will be operational &ldquo;within the next month.&rdquo;

The only other formal R&R program is the 15-day Non-Chargeable Rest and Recuperation (NCR&R) leave program. To be eligible, servicemembers must be on a minimum 365-day deployment with at least 270 days physically in country.

Starting this year, deployments for Army personnel were reduced to nine months so most soldiers are not eligible. Marine infantry battalions are on seven-month deployments.

The Special Liberty Pass program is for all servicemembers not authorized for NCR&R.

Through nearly a decade of war, nearly 200,000 troops serving in Iraq and Afghanistan traveled to Qatar for Central Command&rsquo;s Rest and Recuperation Pass Program, or R2P2. There, they found an oasis of amenities: pool tables, rooms full of big screen televisions, swimming pools, miniature golf, a discoth&egrave;que, trips to a shopping mall and deep sea fishing.

The program was hailed early on by military leaders who said it was vital to give troops R&R outside the combat zone.

&ldquo;When U.S. forces are in a combat area for an extended period of time, it is extremely important from a leadership perspective to give these young men and women an opportunity to rest, recuperate and reunite with their families, even if for a short time,&rdquo; said Marine Corps Maj. Pete Mitchell, a CENTCOM spokesman in a 2003 Defense Department news release.

But as the Iraq war wound down and the challenges of travel or leave limitations prevented troops in Afghanistan from going, the number of R2P2 participants dwindled, and the program was ended in April of last year.

The facilities are still there, but used by a fraction of those who once did, or about 600-700 people daily of the just over 1,000 who are stationed there, said facility spokesman Antoine Randall. None of the equipment was redistributed.

&ldquo;Afghanistan is further from Qatar than Iraq and Kuwait,&rdquo; Lakin said. &ldquo;Arguably, there are different dynamics that ground commanders in Afghanistan must consider when addressing time away from their areas of operations.&rdquo;

The brigade level facilities won&rsquo;t have the luxuries that troops enjoyed in Qatar, but Lakin said servicemembers will have access to facilities equipped with &ldquo;standard&rdquo; MWR packages and recreation kits, including video games, recreational games such as foosball, televisions and exercise equipment. And, MWR is working to install or upgrade internet caf&eacute; systems, Lakin said.

That&rsquo;s not much more than even small combat outposts generally have: phones, computers and a room for video games.

&ldquo;Each brigade and separate battalion has been allotted funds to improve current facilities and can request additional equipment through their local MWR center,&rdquo; Lakin said, referring to the planned rest-in-place sites.

Facilities for each brigade will differ depending on location, operational conditions, and environmental factors, but a minimum quality of life will be established and kept up at each facility, Lakin said.

A number of factors led to the decision to establish rest-in-place sites, primarily challenges to travel both within and outside the country, as well as shorter deployments, a shrinking number of troops and a high operational tempo, Lakin said. There are other passes and options for commanders to provide rest for those most in need, but he declined to elaborate.

&ldquo;With the reduced boot on ground time, commanders must weigh the amount of time a servicemember will be away from his or her unit, the impact on the overall mission, and the welfare of his/her troops,&rdquo; he said. &ldquo;The fact that tours are three-months shorter on average is a major consideration when considering the overall time available to achieve strategic, operational, and tactical objectives.&rdquo;

Reaction to the new plan from troops in Afghanistan was mixed.

Stationed at Camp Leatherneck in Helmand province, Lance Cpl. Caio Doinviera, 210 Artillery Battalion out of Camp Lejeune, said more MWR facilities would be welcome. He said it&rsquo;s hard to call home or Skype when the Marines are pushed out to remote locations.

&ldquo;For the guys who spend a lot of time outside the wire, it&rsquo;s a great opportunity,&rdquo; he said referring to the brigade level facilities.

Doinviera is on a seven-month deployment and ineligible for the 15-day NCR&R program. However, he likes it that way just fine because he wants to push through his deployment and get home.

Less than a month into their nine-month Afghanistan deployment, members of the 510th Clearance Company in Afghanistan&rsquo;s Farah province said they would not want to be sent back to Kandahar Airfield as a centralized rest location.

The unit got stuck there while trying to get to Farah, said Sgt. Danny Mata, 25, of Laredo, Texas.

&ldquo;You spend two weeks trying to get out here,&rdquo; he said, standing outside Forward Operating Base Farah&rsquo;s dining facility. Going through that again for four days off wouldn&rsquo;t be worth the hassle, he said, but four days off at FOB Farah, if he were left alone, would be all right.

&ldquo;It&rsquo;s not that we don&rsquo;t appreciate [them] trying to get us four days off,&rdquo; said Spc. Efrain Fuentes Rivera, 32, another member of the 510th. But the thought of going through the pain of going to and from the terminal to try to catch a flight out of Farah and back, &ldquo;it&rsquo;s not worth it,&rdquo; he said.

Fuentes Rivera, from Fort Hood, Texas, said he&rsquo;d prefer to have internet in his room to four days off, regardless of the location.

The program will be reviewed regularly, Lakin said, starting 90 days after it is implemented, which could be as early as October.

Stars and Stripes reporters Laura Rauch and Matthew Millham contributed to this report.