Military running behind on MRAP goals 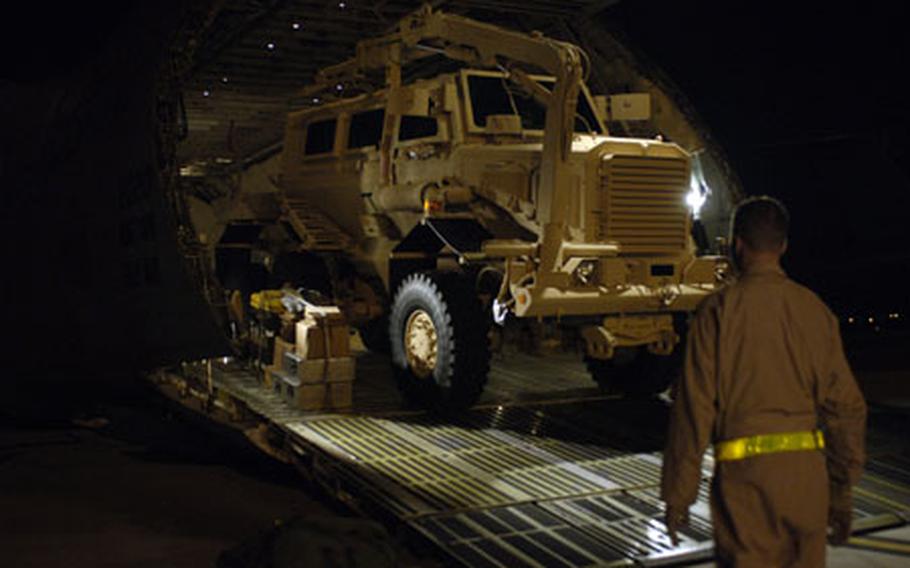 Fewer than half the projected number of blast-resistant vehicles that the Defense Department hoped would be downrange by the end of this year are now expected to be there, a Defense official said.

The vehicles are known as MRAPs, short for Mine Resistant Ambush Protected vehicles, which are heavily armored trucks with V-shaped hulls that deflect blasts from underneath.

In July, the head of the Defense Department&#8217;s MRAP task force said he expected close to 4,000 of the vehicles to be made by the end of this year.

But on Tuesday, a Defense official said the department now expects about 3,000 MRAPs to be made by the end of the year, of which about 1,500 should be in Iraq by year&#8217;s end.

&#8220;Mr. Young&#8217;s projections were based on the desire by the task force to try to increase production by bringing more vendors to the table, but the fact is that it looks like the vendor base will stay pretty much the same through the next few months,&#8221; the official said.

As of Aug. 13, about 400 MRAPs have been delivered to the government, of which about 225 have been sent downrange this year, said Defense Department spokeswoman Cheryl Irwin.

Boosting productionRepresentatives from MRAP manufacturers who spoke with Stars and Stripes said they expect to have the ability to produce more MRAPs at the end of this year and the beginning of 2008.

International Military and Government LLC is one of the companies that makes MRAPs.

The company&#8217;s ability to produce MRAPs had been limited by the fact that it was getting the armor for the vehicles from one company, in Israel, said company President Archie Massicotte.

But now the company is getting the armor from U.S.-based subcontractors in addition to the Israeli firm, meaning International Military and Government expects to be able to produce 500 MRAPs a month by December, Massicotte said.

He said his company will deliver 1,971 MRAPs to the government by February 2008.

But without knowing how many MRAPs the Defense Department wants for next year, the company can&#8217;t ask its suppliers for components for more vehicles, said Bob Walsh, assistant general manager for the company.

In turn, those suppliers need time to get the necessary raw materials, Walsh said.

&#8220;The sooner we know, the better we can plan, the earlier that we can make commitments to deliveries,&#8221; Walsh said.

Force Protection Industries Inc. also would like to know how many MRAPs the Defense Department wants in 2008, said Michael M. Aldrich, vice president of marketing and government relations.

The company made 100 MRAPs in July and is expected to be able to produce 300 per month beginning in January, but it can&#8217;t go beyond that without knowing how many orders it needs to give to its subcontractors, Aldrich said.

As of Thursday, the government had ordered 6,415 MRAPs of the 7,774 authorized for all branches of the service, Irwin said.

The Defense Department plans to look at its future needs for blast-resistant vehicles within the next 60 days, a military official said.

One company has decided not to wait for DOD.

After BAE Systems got an order for 90 MRAPs, it decided to start buying components for the vehicles that take a long time to procure, such as steel, Kevlar and axles, in anticipation of more orders, said John Swift, the company&#8217;s MRAP program manager.

The investment paid off when the Defense Department ordered a further 441 MRAPs, which the company will deliver by the end of January, Swift said.

BAE Systems also has invested in robotic welders to cut the time it takes to do one job from three days to seven or eight hours, he said.

Building in predictabilityU.S. Rep. Neil Abercrombie, D-Hawaii, said one way to bring more predictability to the MRAP procurement process is to move funding for the vehicles into the regular budget.

Right now, the Defense Department cannot award contracts for MRAPs until it gets the supplemental funding, which is hard to predict, Abercrombie said.

Congress is looking to move MRAP funding to the regular budget.

In May, the House approved $1.55 billion for MRAP funding as part of their 2008 Defense budget bills, but Pentagon officials in June asked them to bump up that figure to get more of the heavily-armored trucks on the production line.

Budget planners in the Senate have proposed $4.1 billion in MRAP funding, and House officials have said they hope to increase their original plan.

However, those numbers won&#8217;t be finalized until Congress works out all the details of next year&#8217;s defense budget, which is expected to happen in September.

Defense Secretary Robert Gates has spoken many times about the importance of getting MRAPs to Iraq quickly.

In June, he told reporters that he was pressing manufacturers to increase MRAP production and looking for ways to cut the time it takes the vehicles to get to Iraq.