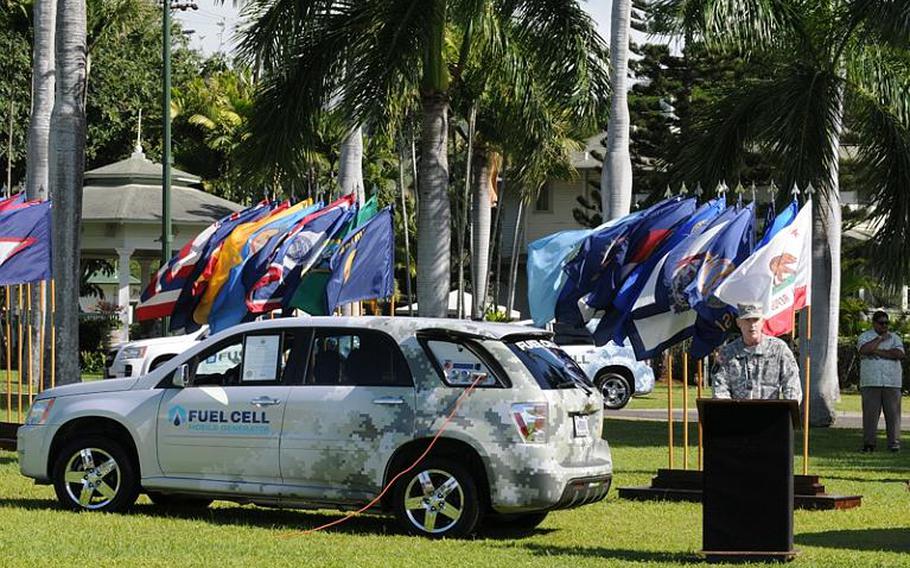 The services are testing 16 General Motors Equinoxes, which run on hydrogen fuel cells that generate electricity by converting hydrogen gas into water.

In addition to potentially saving money and securing future energy sources, the initiatives have a more practical application: If the DOD can cut down on the need for fuel, it can reduce the risk of delivering that fuel through the traditionally dangerous supply lines in places like Afghanistan.

&ldquo;Our pursuit of alternative energy is closely tied to our commitment to continually adapt to an ever-changing security environment,&rdquo; George Ka&rsquo;iliwai, director of Resources and Assessment for U.S. Pacific Command in Hawaii, said in a press release issued after a demonstration of the fleet at Fort Shafter on Wednesday.

&ldquo;Defense relationships and military approaches alone can&rsquo;t solve all of our energy challenges, but they underpin the initiatives we&rsquo;re taking within the Department of Defense to reduce the dependence on foreign sources of energy,&rdquo; he said.

The hydrogen fuel cell fleet in Hawaii is just a small part of the greener DOD picture.

For example, the Navy is sinking $170 million into a program to help fund private biofuel development, while the Army recently launched a task force to identify large-scale projects aimed at pulling 25 percent of the service&rsquo;s energy needs from solar, wind and other renewable sources by 2025.

The GM hydrogen fuel cell system is twice as efficient as an internal combustion engine, provides a range of up to 200 miles on a single charge and emits nothing but a little steam, according to officials.

&ldquo;There&rsquo;s always been this folklore about how dangerous hydrogen energy is,&rdquo; he said. &ldquo;We spent a lot of time on safety with this vehicle.&rdquo;

The hydrogen gas tanks in the rear of the vehicle are &ldquo;literally bullet-proof,&rdquo; he said.

One of the vehicles was built to function as a mobile generator capable of powering five homes, Freese said.

The vehicles fill up on hydrogen at several bases on Oahu that have been equipped with special pumps, he said. Both U.S. Pacific Command and GM are involved in a public-private initiative in Hawaii to develop hydrogen refueling infrastructure to reduce the island&rsquo;s reliance on petroleum.

Hydrogen can be produced from a variety of energy sources and is also a byproduct of other industrial processes, Freese said.

GM has produced more than 100 hydrogen fuel cell vehicles since 2007, most of which have been tested in civilian markets until now.