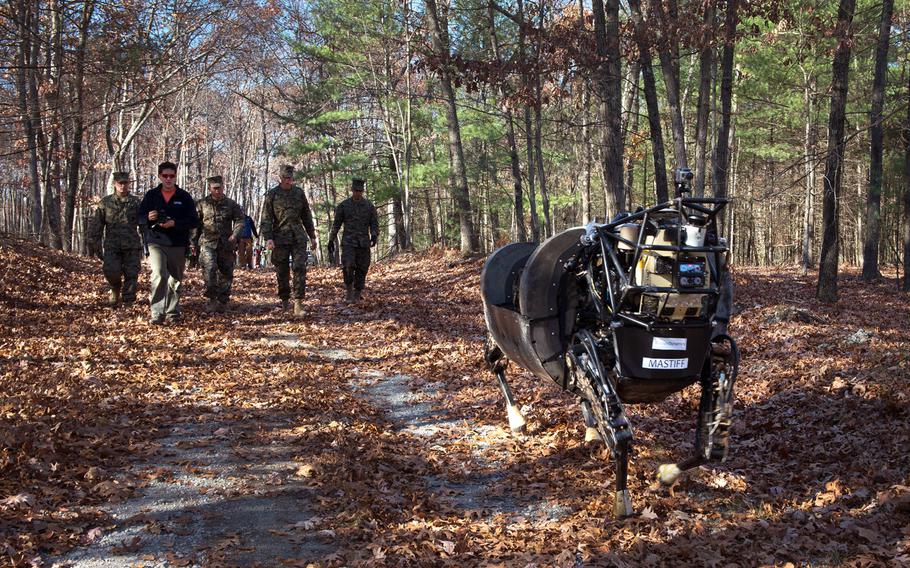 U.S. Marines test the capabilities of the Legged Squad Support System, at Fort Devens, Mass, on Nov. 5, 2013. The LS3 is developed by Boston Dynamics and can carry up to 400 pounds of gear. Military investment in robots is starting to impact mainstream America. (U.S. Marines Corps)

U.S. Marines test the capabilities of the Legged Squad Support System, at Fort Devens, Mass, on Nov. 5, 2013. The LS3 is developed by Boston Dynamics and can carry up to 400 pounds of gear. Military investment in robots is starting to impact mainstream America. (U.S. Marines Corps) 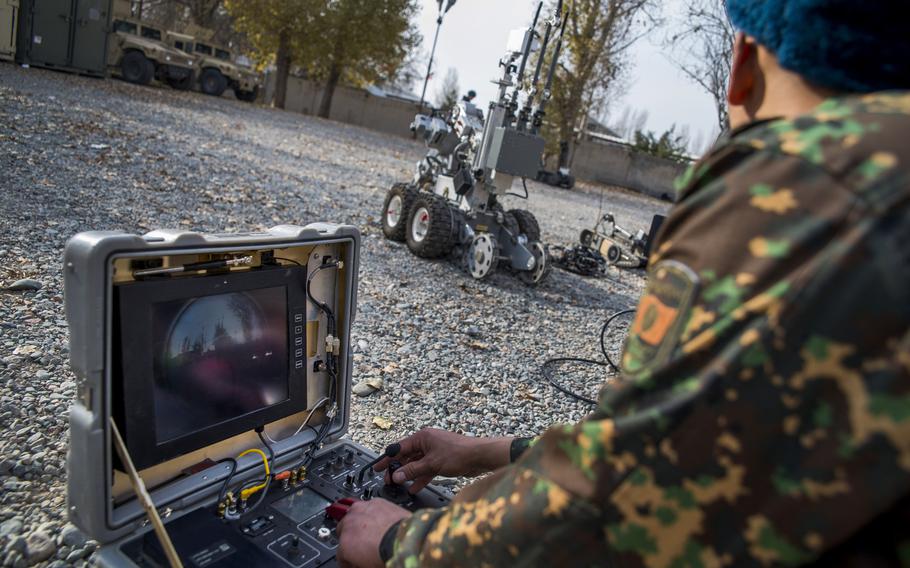 Military investment in robots during a decade of war is starting to impact mainstream America, with tech giants buying into the technology and experts predicting that machines could soon replace humans in a wide range of jobs.

Drone aircraft, unmanned ground vehicles and prosthetics that can be controlled by thought have been developed in response to the needs of battling Islamic extremists from the Middle East to Southeast Asia. Now tech giants such as Apple, Amazon and Google are placing big bets on the robotics industry.

“You have got some very heavy-duty players investing in it,” Arizona State University engineering professor Braden Allenby said last month.

In November, Apple disclosed a $10.5 billion investment in supply-chain robots and automation, while Amazon touted a plan for drone deliveries.

Google has bought eight robotics companies in the past six months, including Boston Dynamics — a company funded largely by the Defense Advanced Research Projects Agency (DARPA) and other U.S. military agencies.

“Google is stepping in and commercializing where the military ends,” said Frank Tobe, publisher of The Robot Report, which has chronicled the industry’s rise since 2008.

For example, iRobot makes the Roomba, a robotic vacuum cleaner for the home, and the Pacbot, a robot that has seen extensive service helping troops defuse bombs in Iraq and Afghanistan.

“Within five to 10 years, I think we are going to see a lot” of robots in homes and factories, Allenby said.

A major development stemming from military investment is autonomous flying, which has become much more sophisticated than the auto-pilots that were around before the terrorist attacks of Sept. 11, 2001, Tobe said.

“From a robotic point of view, you have things going on that would not have happened had 9/11 not occurred,” he said.

Defense contractors such as Northrop Grumman plan to use technology developed for military drones when the Federal Aviation Administration opens up U.S. airspace to unmanned aircraft in 2015, Tobe said.

Defense contractors “bring a level of sophistication that the FAA will require,” he said.

The Federal Aviation Administration has selected teams based in Virginia, Alaska, Nevada, New York, North Dakota and Texas to test unmanned aircraft systems this year in preparation for their integration into the national airspace.

“This is a really big deal,” a Washington Post article quoted Nevada Gov. Brian Sandoval as saying in December. “It could mean billions of dollars in new investment, thousands of technical jobs for our state.”

There isn’t much commercial demand yet for large drones like the ones flying over Pakistan and Afghanistan. However, many commercial jets are highly automated and approach robotic status, Allenby said.

“We wouldn’t dare call them (airliners) robots, because the implications would be unacceptable to the public,” he said.

But civilian demand for small hovering drones is on a par with military demand, he said.

“It is very hard to know exactly which sector is driving development now,” he said.

What is clear is that, to date, military initiatives have played a major role in the rapid improvement in robots, much of which involves better software that enables the machines to respond to more complex situations, Allenby said.

Last month, 16 teams took part in the DARPA Robotics Challenge Trials in Florida. The trials, in which robots had to complete the sort of tasks they might face responding to a natural disaster, were won by a team of Japanese experts from Schaft Inc., a company recently acquired by Google.

The trials follow DARPA initiatives to develop a robotic arm and autonomous vehicles.

The robotic arm initiative is aimed at building a robot that can unzip a duffle bag, search it for contraband, put everything back and zip it up, he said.

“They have yet to achieve that, but there are numerous commercial applications such as replacing Transportation Security Administration agents at the airport, he said.

The top commercial application for robotics in the immediate future will be in agriculture, Tobe predicted.

For example, drones will fly over farmland, map it and send information to robotic farm equipment so that water, pesticide and fertilizer are only used where they are needed, he said.

“This is just taking military technology and converting it to commercial technology,” he said.

There hasn’t been much debate yet about the impact on society of technology that has been developed during recent conflicts, Allenby said.

“Robotic systems might be very effective in counter-insurgencies, but what happens when they leach back to society?” he asked.

Hobbyists are taking military robot technology and dreaming up a myriad of uses for it. News organizations are already using drones equipped with cameras to record news. It might not be long before they find their way into the hands of divorce lawyers and political operatives, Allenby said.

“It would be very unwise to think there aren’t jobs that in the near to medium future won’t be challenged by robotics,” he added.

A recent study by Oxford researchers Carl Frey and Nick Bostrom predicted 47 percent of current U.S. jobs could be taken over by machines by 2045.

The pair, who looked at the potential for machines to replace humans in more than 700 occupations, said most workers in transportation and logistics, together with the bulk of office and administrative support workers and labor in production jobs, were at risk. Surprisingly, many service jobs, where most recent U.S. employment growth has occurred, are highly susceptible to computerization, Frey and Bostrom said.

For example, receptionists, telemarketers and bank tellers are virtually certain to be replaced by machines while athletes, flight attendants, historians and actors would likely keep their jobs, they said.

“Algorithms for big data… can readily substitute for labor in a wide range of non-routine cognitive tasks,” they said. “In addition, advanced robots are gaining enhanced senses and dexterity, allowing them to perform a broader scope of manual tasks.”

Fears that machines will put humans out of work date back to the industrial revolution.

“We are creating a combination of robotic systems and the artificial intelligence to power them that raises the possibility that we will lose a lot of jobs to robotics and not get them back,” Allenby warned.

Some military jobs could be under threat, he said.

“It is very hard to develop a robot to do special operations, but we have already replaced sentries on the DMZ [Korean Demilitarized Zone] with semi-autonomous systems,” he said.

The speed of the military’s move to automation will depend more on culture than technology, Allenby predicted.

“Military culture is very conservative,” he said. “It’s going to be a cultural timescale rather than a technology timescale.”