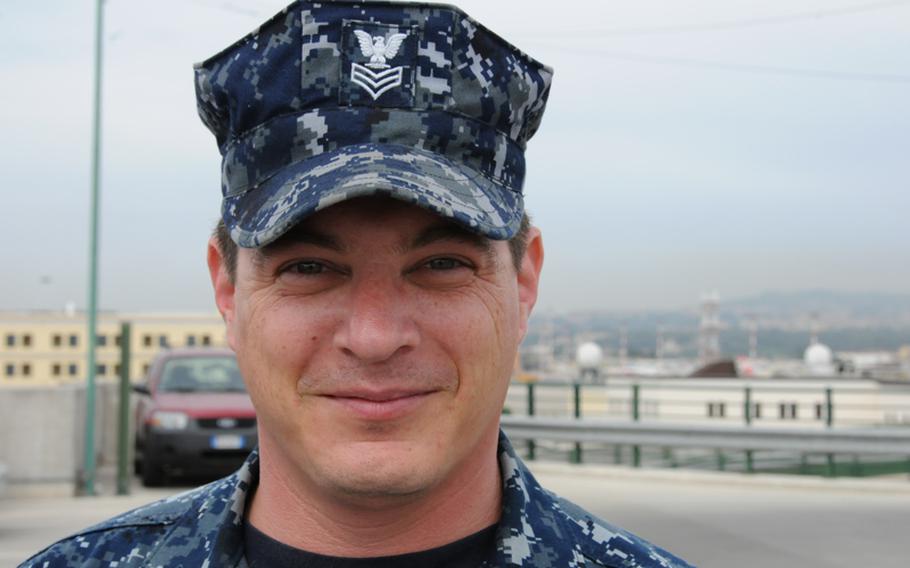 Petty Officer 1st Class Ethan Gurney, an electronics technician, will soon retire from the Navy after 20 years and collect a pension. (Sandra Jontz/Stars and Stripes)

Petty Officer 1st Class Ethan Gurney, an electronics technician, will soon retire from the Navy after 20 years and collect a pension. (Sandra Jontz/Stars and Stripes) 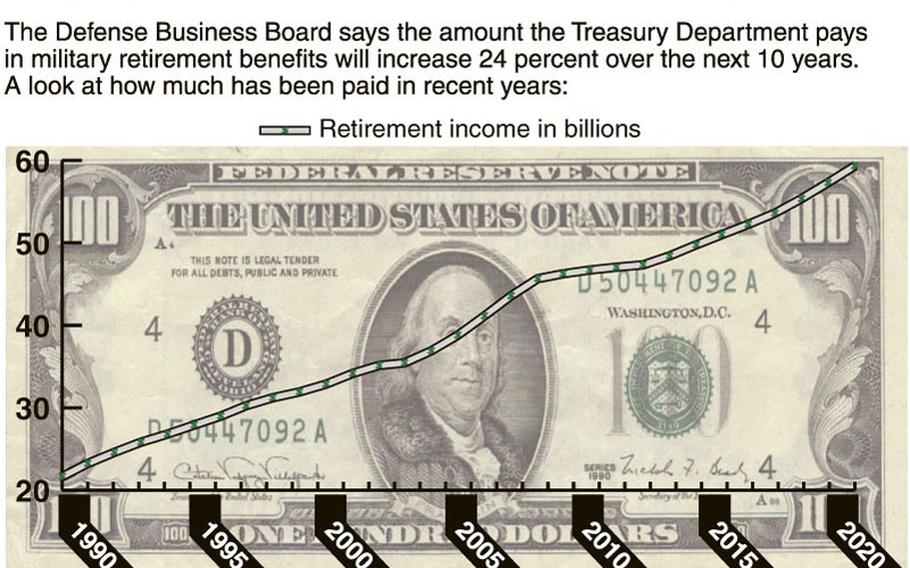 NAPLES, Italy &mdash; The military retirement system is unsustainable and in dire need of repair, according to an influential Pentagon advisory board.

The Defense Business Board &mdash; tasked by Defense Secretary Robert Gates to find ways to reduce the DOD budget &mdash; says annual Treasury Department payments into the system will balloon from $47.7 billion this year to $59.3 billion by 2020.

The 25-member group of civilian business leaders suggests that the Defense Department look at changing the current system, even hinting at raising the number of years troops must serve before being eligible for retirement pay.

The current system &ldquo;encourages our military to leave at 20 years when they are most productive and experienced, and then pays them and their families and their survivors for another 40 years," committee chairman Arnold Punaro told board members at their quarterly meeting late last month.

Making troops serve longer before receiving pay does not sit well with some servicemembers.

&ldquo;No rational person would put up with 20 years of the hardships that you&rsquo;re forced to endure if it wasn&rsquo;t for the brass ring at the end of it all called instant retirement,&rdquo; said Petty Officer 1st Class Ethan Gurney, an electronics technician based in Naples.

It&rsquo;s not really fair to compare military service to the civilian work force, said Gurney, who, at 38, is only a few months from retirement.

&ldquo;The continuous deployments, living conditions, remote and hazardous duty stations are unique to the military,&rdquo; he said. &ldquo;This isn&rsquo;t a civilian company, so any civilian model that you use to compare to the military is impertinent. To do so is irresponsible at best.&rdquo;

The talk of changing the military retirement system isn&rsquo;t new.

The 10th Quadrennial Review of Military Compensation, released in 2008, said the current system is inequitable, inflexible and inefficient.

Mainly, the benefit does not vest until 20 years of service, so only a small fraction of the force ever receives retirement pay. Furthermore, personnel who reach 10 years of service have a strong incentive to remain in the military to receive retirement benefits, the review stated.

As a possible fix, the review recommended the DOD test a plan that would calculate retirement pay based on a servicemember&rsquo;s time in service and salary. The benefit would be payable at age 57 for those with 20 years of service and at 60 for those with less than 20 years. Under the plan, in which troops would be vested after 10 years, the DOD would annually contribute up to 5 percent of basic pay to the servicemembers&rsquo; retirement, similar to many civilian business plans.

The idea of a 30-year retirement with a possible pay-in by servicemembers is a more equitable possibility, according to Nathaniel Fick, chief executive officer for the Center for a New American Security, a Washington, D.C.-based think tank.

In a May column on Foreign Policy&rsquo;s website, Fick, a former Marine, slammed the current retirement system saying, &ldquo;Advances in medicine, lengthening lifespan, and the shift to a service economy in this country &hellip; make me wonder &mdash; as a taxpayer &mdash; why we&rsquo;re paying 38-year-olds as they embark on their second full career.&rdquo;

According to Fick, the focus should instead be on front-loading benefits for new recruits since few new servicemembers have retirement benefits on their mind when they sign up.

Better benefits could help in recruiting, according to Navy Career Counselor Carmen Sepulveda, who is assigned to Navy Recruiting District New England, which is responsible for overseas recruiting in Europe.

Sepulveda said most of the potential new recruits in Europe &mdash; children of military families stationed here &mdash; are interested in the educational benefits and work experience.

&ldquo;The retirement isn&rsquo;t that much of a selling point. They&rsquo;re thinking about their parent&rsquo;s retirement, not their own,&rdquo; she said. &ldquo;But when you look at retention, at a second or third enlistment, that&rsquo;s where the retirement is a big deal.&rdquo;

But the prospect of a 30-year end point for a pension could adversely affect retention, said Chief Petty Officer Jose Fiallos, a Navy career counselor based in Naples.

&ldquo;There are already so many hurdles to get to 20 years because the Navy is so competitive,&rdquo; Fiallos said. &ldquo;I think a 30-year time-in-service requirement to get to retirement would most definitely have a negative impact on retention.&rdquo;

In October, the board will make its final recommendations to the secretary of defense. And Ethan Gurney will be preparing to trade in his uniform for civilian clothes, looking forward to collecting his pension.