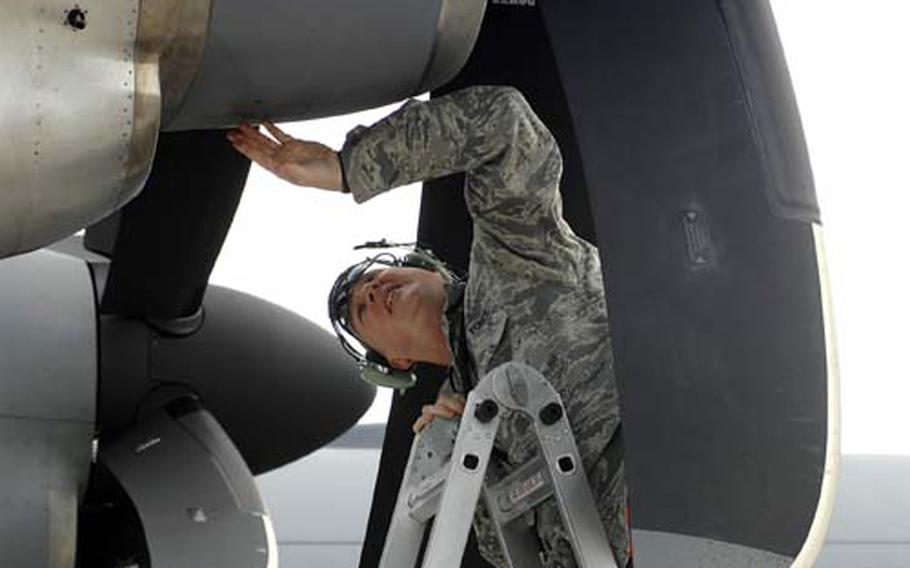 Master Sgt. Darren Veneman of the 86th Aircraft Maintenance Squadron at Ramstein Air Base, Germany, checks the engine of a C-130J, after a test flight on Wednesday. The visual inspection of the plane showed no damage from volcanic ash, and the squadron was analyzing the computer data from the flight. (Michael Abrams / S&S)

Master Sgt. Darren Veneman of the 86th Aircraft Maintenance Squadron at Ramstein Air Base, Germany, checks the engine of a C-130J, after a test flight on Wednesday. The visual inspection of the plane showed no damage from volcanic ash, and the squadron was analyzing the computer data from the flight. (Michael Abrams / S&S) Senior Airmen Joshua Veazey, left, and Brittany Lopez Martniez, of the 86th Aircraft Maintenance Squadron at Ramstein Air Base, Germany, check the propellers of a C-130J aircraft, after a test flight on Wednesday. (Michael Abrams / S&S)

RAMSTEIN AIR BASE, Germany &#8212; U.S. military aircraft took to the skies over much of Europe on Wednesday after being grounded for nearly a week by fears that the Icelandic volcano ash cloud could damage aircraft engines.

At Ramstein, normally the military&#8217;s busiest hub in Europe, a test flight Wednesday afternoon confirmed it was safe to launch aircraft again, said Col. Tim Budd, 86th Operations Group commander. The C-130 test flight was the first to leave Ramstein since its planes were grounded Friday.

The plane flew for about a half hour, after which maintainers performed visual tests and checked if the plane&#8217;s onboard instruments detected any damage. The C-130&#8217;s propellers are powered by a jet engine, making the aircraft &#8220;just as susceptible to ash damage as any other jet engine,&#8221; Budd said.

The weather forecast the Air Force is using indicated a significant decline in the ash cloud by Wednesday afternoon, Budd said.

He said regular missions would resume Wednesday evening, including a few aircraft supporting the troop buildup in Afghanistan.

With Ramstein closed, the U.S. military had shifted aircraft carrying troops and equipment to and from Iraq and Afghanistan to routes farther south to places such as Naval Station Rota and Moron Air Base in Spain. Some flights evacuating injured troops went directly to the States instead of stopping at Landstuhl Regional Medical Center, with some recent medical flights from Afghanistan heading to Iraq.

In the coming days, Budd said, the air traffic may continue to route through Spain to make up for the shortfall.

After a long lull, some 86th Airlift Wing aircrews had a full night in front of them. Two C-130J&#8217;s were to fly U.S. airmen four hours to Bulgaria on Wednesday night for an exercise that was supposed to start earlier in the week. Other immediate missions planned included getting distinguished visitors, general officers and senior civilians to scheduled meetings and moving cargo throughout Europe and Africa.

Elsewhere in Europe, Spangdahlem Air Base in Germany planned to launch two A-10 fighter jets on a test flight Wednesday evening and then determine whether to resume regular flight operations, base spokeswoman 2nd Lt. Kathleen Polesnak said.

The grounding of commercial aircraft in Europe had left 850 Defense Department schools staff members unable to get back to work on Monday, but staff members were trickling back.

Department of Defense Education Activity officials decided Wednesday that those who were absent would not have to use personal leave days, but would be granted administrative leave as long as they could provide proof of travel delays when they returned to work.

DODDS-Europe spent about $24,000 in salaries for substitute teachers Monday, spokeswoman Margret Menzies said Wednesday. She said that figure will steadily get smaller as teachers make it back to work.

Army and Air Force officials say that local post offices are still accepting outgoing mail, although shipments to the States stopped Friday. About 30 tons of outgoing mail are waiting delivery at military hubs in Europe. Some delays are expected when service resumes.