Military response to Harvey could grow as large as Katrina deployment 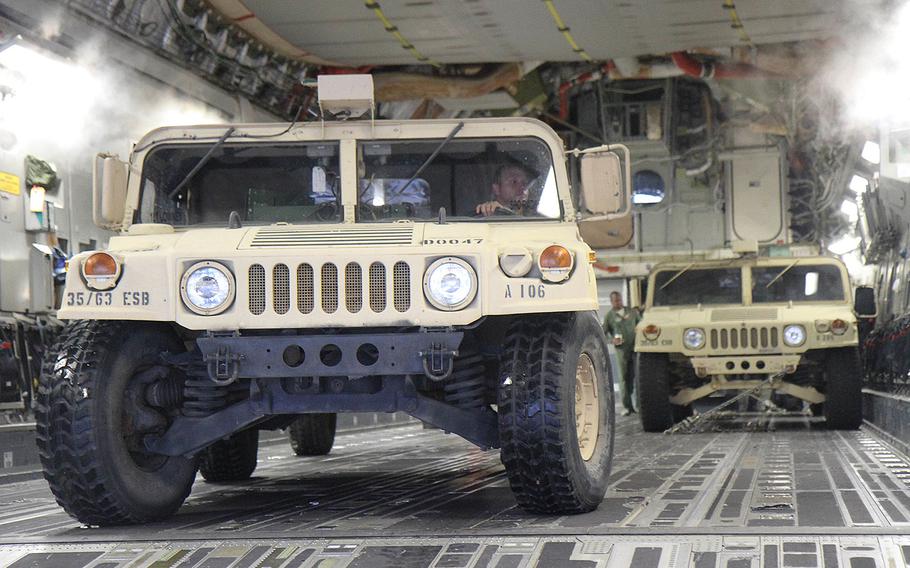 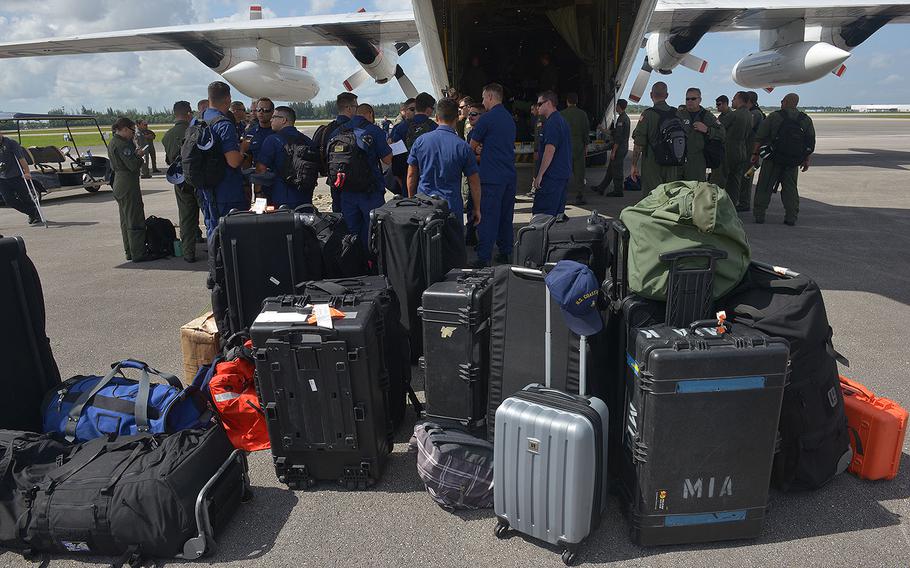 Alaska Air National Guard airmen load and secure cargo onto a Joint Base Elmendorf-Richardson C-17 Globemaster III in Alaska on Aug. 28, 2017. They were traveling to Houston as part of a humanitarian mission in response to Hurricane Harvey. (Javier Alvarez/U.S. Air Force) 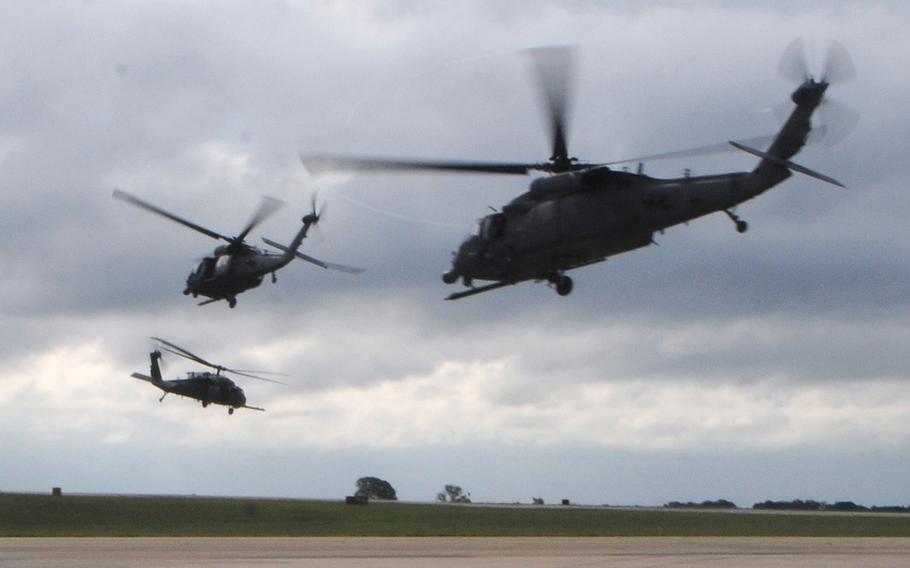 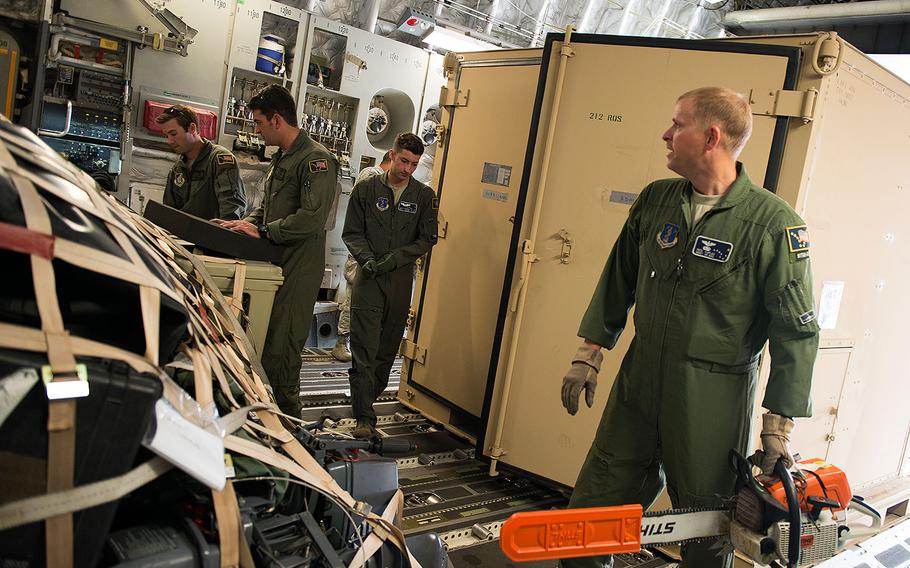 Alaska Air National Guard airmen load and secure cargo on a C-17 Globemaster III at Joint Base Elmendorf-Richardson on Aug. 28, 2017 before traveling to Houston in response to Hurricane Harvey. (Javier Alvarez/U.S. Air Force) 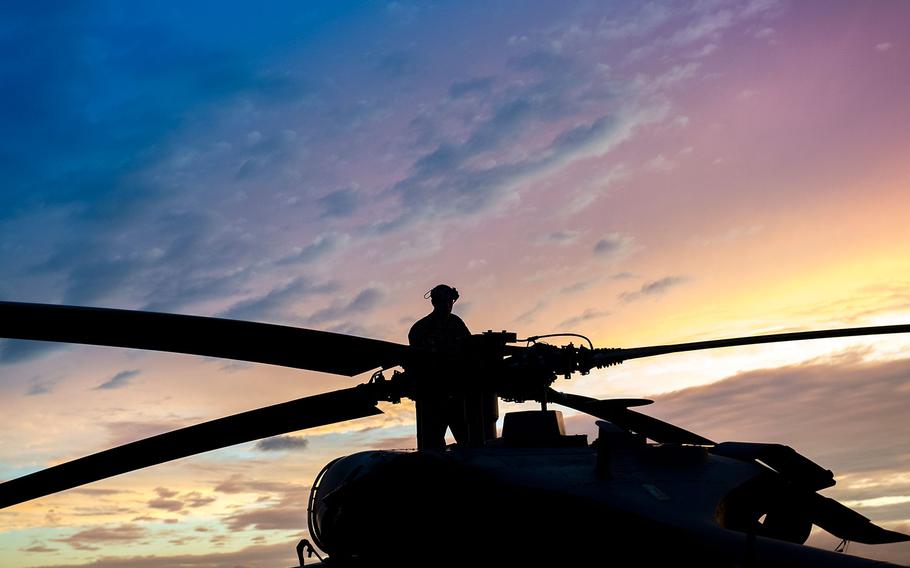 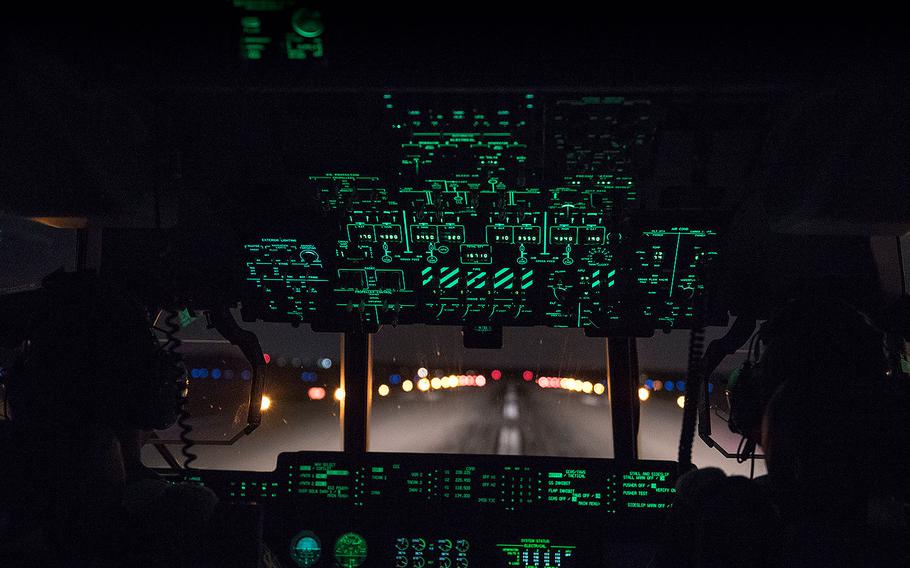 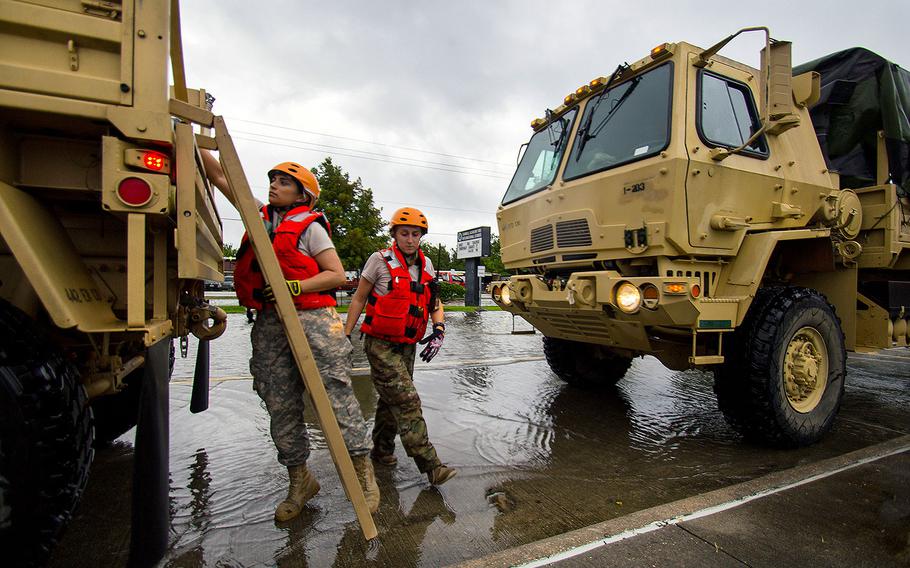 Soldiers with the Texas Army National Guard ready their trucks as they make their way through Houston while floodwaters from Hurricane Harvey continue to rise, Monday, Aug. 28, 2017. (Tim Pruitt/U.S. Army)

WASHINGTON — Several thousand troops will soon join about 3,500 servicemembers already responding to Hurricane Harvey rescue efforts in southeastern Texas in an operation that could equal the size of the military’s response to Hurricane Katrina, a National Guard general said Tuesday.

Air Force Gen. James Witham, the domestic operations director for the National Guard Bureau, said military efforts could last several weeks and grow as large as the Pentagon’s involvement in 2005 to Katrina, when some 50,000 guardsmen and 20,000 active-duty servicemembers participated in the response to the devastating storm in Louisiana and Mississippi.

“This will be a long-term effort,” Witham told reporters Tuesday at the Pentagon. “Usually when the Guard responds to hurricane-type events we normally talk about that first 72 to 96 hours for life saving and sustainment then we’re into a recovery effort. Due to the nature of this storm as it spins across southeast Texas for days and dumps record or historical levels of rainfall … our response to this hurricane has been very different than ever before.”

Already some 3,000 Texas National Guardsmen and about 500 active-duty soldiers and airmen are participating in rescue operations, primarily by boat but also by helicopter, Witham said. The bureau on Tuesday was in the process of alerting between 20,000 and 30,000 additional National Guard troops, primarily from states around Texas, to prepare to deploy should Texas Gov. Greg Abbott request them.

Witham said Abbott is likely to request the aid of all of those servicemembers in the coming days alongside about 12,000 Texas guardsmen who have already been called to duty and will be phased into the operations as needed.

As of Tuesday morning, National Guardsmen had helped rescue about 3,500 people stranded by massive flooding throughout the region, the general said. Among those people, about 300 were rescued by National Guard helicopter hoist operations.

The response efforts have been especially difficult because the storm has remained in the area and continues to dump rain along the Texas coast and into southwest Louisiana, Witham said. The National Weather Service reported Tuesday that Harvey has already dropped more than 25 inches of rain along the coast and some areas could receive as much as 50 inches by Friday.

The National Guard will soon double the number of high-profile trucks to 400. The trucks can drive through 2 to 3 feet of standing water and are being used to evacuate stranded residents.

National Guardsmen from Alaska, California, Connecticut, Florida, Kentucky, New York, Nebraska, North Carolina, Oregon and Utah have or will join rescue operations by Wednesday, according to the Guard Bureau.

Meanwhile, Louisiana had activated about 400 National Guard troops by Tuesday and was staging vehicles and supplies to respond to flooding in its southwestern region anticipated by state officials in coming days.

Witham said the Pentagon is prepared to assist Louisiana Gov. John Bel Edwards with anything he needs, just as it has pledged to Abbott in Texas.