An Iraqi interpreter, left, translates a conversation between an Iraqi National Police officer and U.S. soldiers in Baghdad. (Heath Druzin)

An Iraqi interpreter, left, translates a conversation between an Iraqi National Police officer and U.S. soldiers in Baghdad. (Heath Druzin) 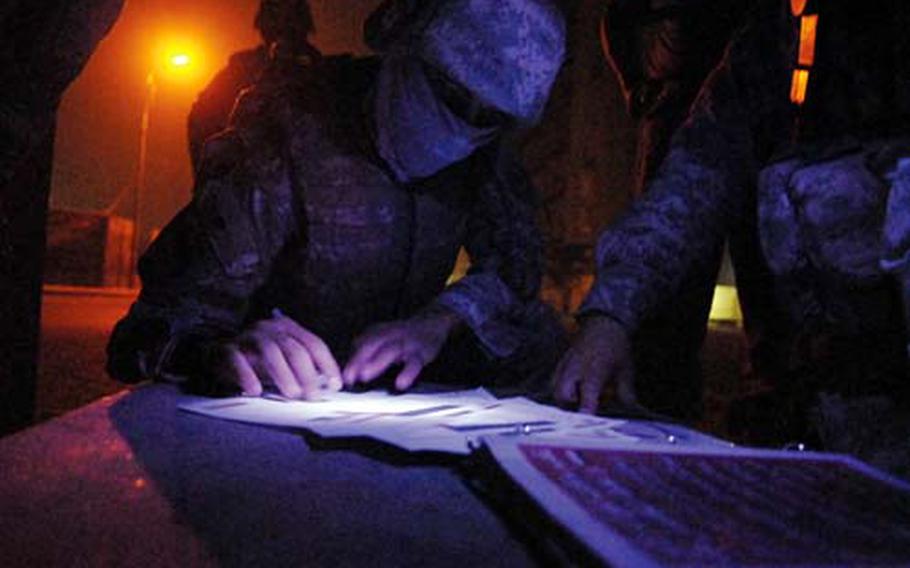 A masked interpreter translates some documents for an American patrol in Baghdad. (James Warden / S&S)

BAGHDAD &#8212; The military has lifted a much-criticized ban on Iraqi interpreters wearing masks while working with U.S. forces.

The change comes after U.S. Sen. Ron Wyden, D-Ore., 12 other members of Congress and an interpreters&#8217; association asked the Pentagon in a letter to rescind the ban.

Multi-National Division&#8211;Baghdad prohibited interpreters from wearing masks starting at the end of September. The decision was meant to be a visible sign of Iraq&#8217;s security gains. An official explained the policy by saying "professional units don&#8217;t conceal their identity by wearing masks."

But more than 300 interpreters working with American units have been killed since 2003, including some who were clearly targeted because of their jobs, and many interpreters continue to fear for their lives. They must frequently leave secure bases to return home to their families. Masks help ensure that insurgents do not target them for assassination, they have argued.

MND-B officials said that the initial ban was an attempt to force progress while the most recent ban reflected real progress.

Yet interpreters didn&#8217;t agree. Some only reluctantly removed their masks while others quit their jobs, although the military said it hadn&#8217;t had any difficulty hiring interpreters.

In many cases, soldiers on the ground simply didn&#8217;t enforce the ban. Stars and Stripes photos in an October story on the ban showed fully masked interpreters. A December story on a separate interpreter issue showed no change.

Officials with Multi-National Division&#8211;Baghdad could not be reached for comment about the policy change by deadline Wednesday. A Pentagon spokesman deferred questions about the issue to the division.

With the ban lifted, it will be up to local military leaders to decide when interpreters must shed their masks. That occasionally happened prior to the ban, when U.S. officers would only take interpreters willing to remove their masks to certain key events.

Wyden said he was "dumbfounded" with the initial decision, particularly the military&#8217;s assertions that masks were unprofessional. He said he learned about it when an Oregon soldier brought the issue to his attention.

The Checkpoint One Foundation, the interpreters organization that became involved, is also based in Salem, Ore.

Protecting interpreters is key because the American soldiers in Iraq rely on them so much to navigate the Iraq&#8217;s complexities. An interpreter whose family had been kidnapped could be pressured to work against the Americans, Wyden said.

"We put a lot of effort into it and got a lot of members of Congress involved," Wyden said. "It was clear to me that this was important to the security of our troops."