Military reaching out to civilian police to patrol on bases 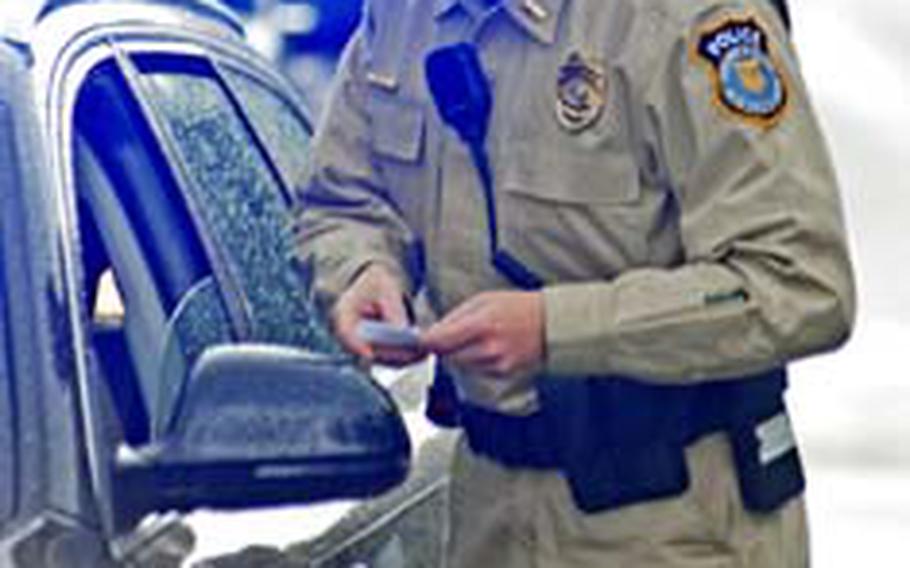 Department of the Army civilian police officer Lt. Shane Kantz, 37, of Richmond, Va., talks to a motorist during a routine traffic stop in Vilseck, Germany, on Friday. (Seth Robson / S&S)

VILSECK, Germany &#8212; Civilian police officers might soon be walking the beat at many U.S. overseas Army bases as combat missions continue to stretch the military police thin, according to one of the top military policemen in Europe.

So far, U.S. Army Garrison Grafenw&#246;hr, which includes Vilseck&#8217;s Rose Barracks, is the only overseas garrison patrolled by civilian police. Grafenw&#246;hr provost marshal Lt. Col. Shawn Driscoll predicted the program, known as the Department of the Army Civilian Police, could expand to other Army bases in Europe.

The civilian police officers, who wear tan uniforms, have manned desks at garrison MP stations all over Europe since 2006. In May, USAG Grafenw&#246;hr started hiring civilian patrol officers, called watch commanders, to head out on the road with MPs.

&#8220;I expect this to be the standard for other enduring installations in Europe.&#8221;

An Installation Management Command-Europe official reached Friday said he was unaware of any plans to expand the program.

But &#8220;as positive results from Grafenw&#246;hr&#8217;s community patrols reach other commanders, it is likely other garrison commanders will look at this program as a capability to help meet future ... needs,&#8221; said Tom Saunders, IMCOM spokesman.

Constant deployments have left a &#8220;capability gap&#8221; back home, said Driscoll, who has 11 civilian police officers working out of his station with three more officers on the way.

As of July, there were 54,476 Army MPs with 3,805 stationed overseas, 6,209 deployed to Iraq and 1,829 deployed to Afghanistan, according to Driscoll, citing the Office of the Provost Marshal General.

At Grafenw&#246;hr, the 709th MP Battalion has deployed to Iraq twice and is currently deployed to Afghanistan. The 615th MP Company has deployed twice to Iraq and is preparing for another deployment.

People should not expect to wake up one day and find that all the MPs have been replaced by civilians, Driscoll said.

Even so, civilian police &#8212; who are paid between $41,000 and $53,000 a year plus housing and cost-of-living benefits &#8212; will be involved in law enforcement at garrisons for the foreseeable future, Driscoll said.

One of the civilians, Lt. Shane Kantz, 37, of Richmond, Va., came to Germany in May after working as a police officer in Virginia for nine years.

Kantz said the MPs were a little apprehensive when he started working with the civilian police.

Driscoll said he doesn&#8217;t think MPs felt their jobs were threatened but added that there was some apprehension.

&#8220;People were apprehensive because they didn&#8217;t know who or what these guys were. They have discovered that they are experienced policemen who they can learn from,&#8221; he said.

Sgt. Nathan Byrd, 26, of Catawba, N.C., a member of the 527th MP Company who helped Kantz check vehicles at Vilseck last Friday, said he&#8217;s impressed by what he&#8217;d seen from his civilian counterparts.