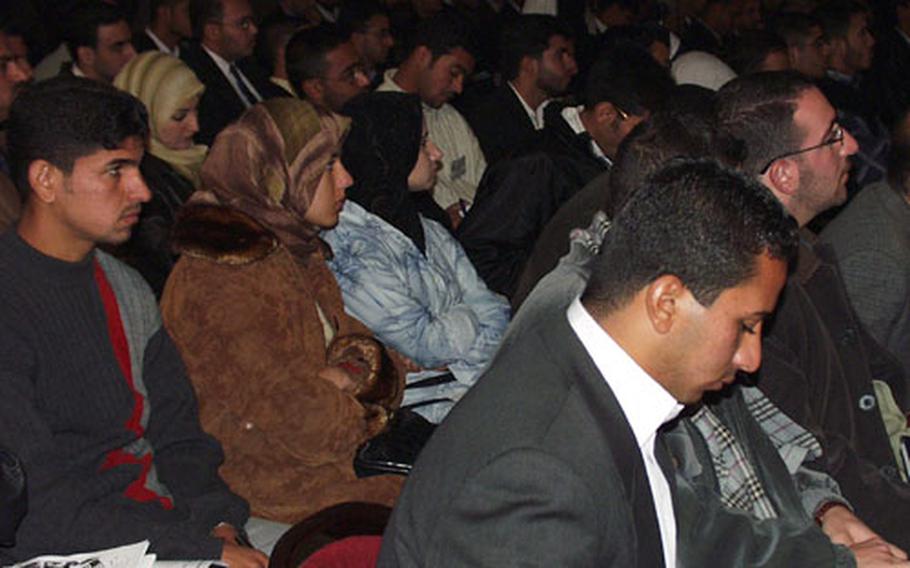 Iraqi university students attend a conference with professors and U.S. military officers on the future of Iraq. (Ward Sanderson / S&S)

BAGHDAD &#8212; While attacks continue to claim the lives of U.S. soldiers, a forum of university students and military commanders hinted at the type of free and open Iraq that the Bush administration has been promising.

Though no deep wrinkles in international affairs were ironed out, the discussion at the Palestine Hotel did allow Iraqis to do what Saddam Hussein never allowed: vent.

Some complained of an unelected Governing Council. Others complained about university unions and U.S. forces using dorms. Others were more direct: What good is democracy if anarchy is the immediate result?

The colonel gave a brief history of modern Iraq, from its British foundation in the 1920s to its bitter feuds and final tendency toward despotism. The nation&#8217;s leaders arose out of struggles between clerics, sheiks and political zealots.

&#8220;To these people the state was a guarantor of privilege, giving these people advantage over the rest,&#8221; Mansoor said.

The dean of Baghdad University&#8217;s pharmaceutical college, Prof. Mustafa Al-Hiti, spoke of the far more ancient origins of the region, the days of Babylon. But he also mentioned that Iraq&#8217;s current path follows the footsteps of the Athenians, the first voters in history.

Al-Hiti, in Arabic, said Iraqis now must savor and shoulder the task of electing their own rulers and support a constitution guaranteeing a free press, the right to join political and social groups and the right to innocence until proven guilty.

He also advocated both a role for the Quran in public life and the absolute equality of Shiite and Sunni, Christian and Kurd.

During a question-and-answer session, one student asked what would happen to the fallen president.

&#8220;A final decision has not been made yet as to where to try Saddam Hussein for war crimes and for crimes against humanity,&#8221; said Lt. Col. Sharon Riley, the senior attorney for the division.

On Dec. 10, the Governing Council announced the Iraqi Special Tribunal for Crimes Against Humanity, complete with prosecutors and investigators. Riley said council members hope to try Saddam in Iraq. Bush, the council and international officials are mulling over the idea.

An even more pointed question was whether the American vision of democracy simply meant poverty in practice.

&#8220;The coalition did not promise prosperity,&#8221; said Lt. Col. John Kem, commander of the brigade&#8217;s 16th Engineer Battalion. Rather, Kem said, the coalition promised an opportunity for Iraqis to work for it.

When a woman complained that U.S. forces now use some dorms at Mustansryia University, Mansoor said that the military had in fact donated another facility for use in their place. Both those replacements and the dorms now used by the military will be kept by the university at a cost of $1.4 million to the Americans.

Another woman complained of widespread reports of innocent Iraqis being arrested alongside terrorists.

&#8220;The majority of these cases are reviewed by Iraqi judges,&#8221; answered Riley, the attorney. Officials review the cases every 30 days, she said, and if investigations turn up no evidence, a suspect is released at that time.

Though questions were sometimes voiced with raised voices and rat-a-tat delivery, the students seemed pleased to unleash their opinions. The meeting ended after several hours in a line of students with more and more questions.