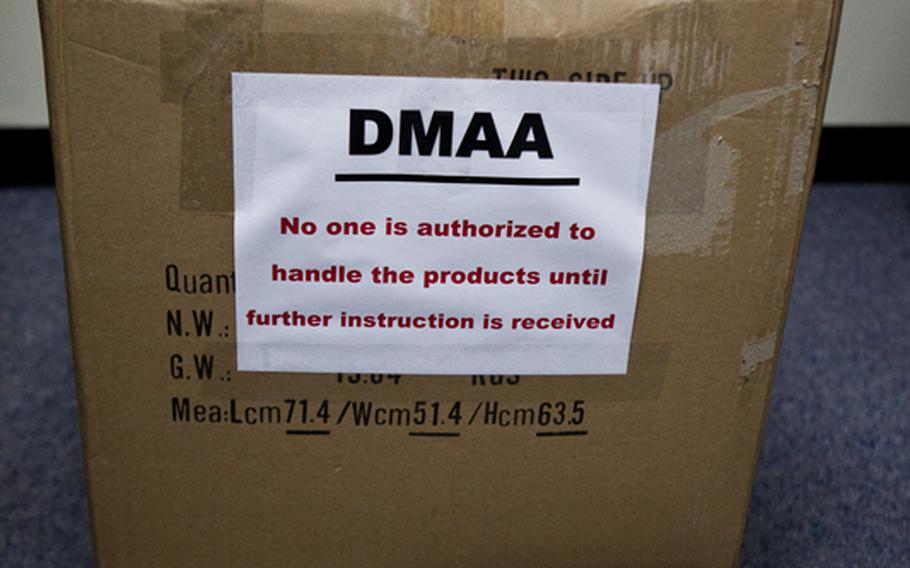 Bottles of dietary supplements containing dimethylamylamine, or DMAA, sit in boxes in the Yokota exchange store room. The Army and Air Force Exchange Service pulled the supplements from the shelves as the Defense Department investigates a possible link between DMAA and two soldiers&#39; deaths. (Grant Okubo/Stars and Stripes) 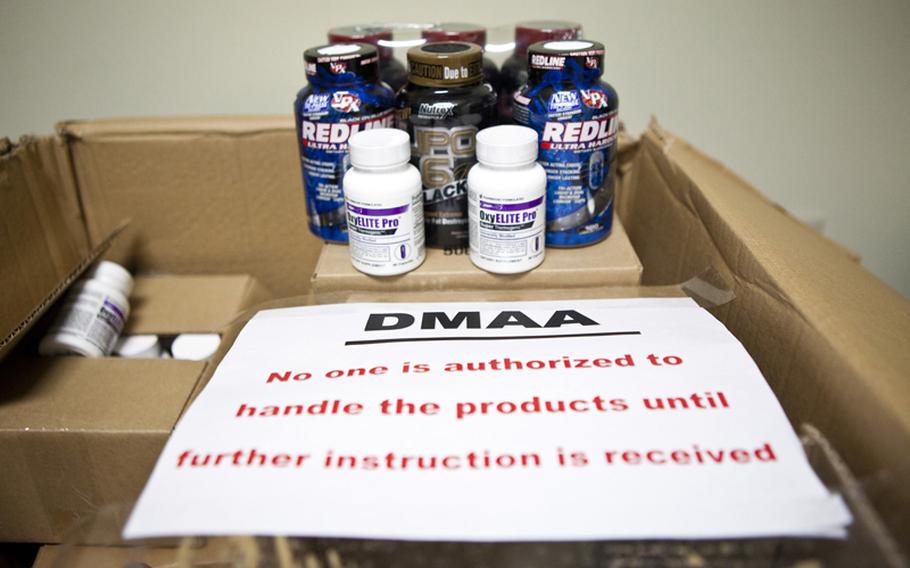 Bottles of dietary supplements containing dimethylamylamine, or DMAA, sit in boxes in the Yokota exchange store room. The Army and Air Force Exchange Service pulled the supplements from the shelves as the Defense Department investigates a possible link between DMAA and the death of two soldiers. (Grant Okubo/Stars and Stripes)

CAMP FOSTER, Okinawa - The Defense Department is investigating a popular body-building supplement suspected in the deaths of two soldiers as well as organ failure and other serious health problems in others.

Dimethylamylamine, also known as DMAA, has been banned by several countries and outlawed by major professional sports organizations. The supplement, sold in products such as OxyElite Pro and Jack3d, was pulled from military exchanges in late December but remains widely available in stateside stores and can be delivered to troops who order products online.

The DOD safety review has added to growing concerns over the side effects of the amphetamine-like substance and underscored mounting evidence that the substance's manufacturer skirted U.S. federal drug safeguards - and flooded products into stores - under false claims that DMAA is a natural ingredient.

The military will "scientifically review and validate the available data regarding the safety of DMAA-containing products," Peter Graves, spokesman for the assistant secretary of defense for health affairs, said in an email to Stars and Stripes. "The other services have a vested interest in the results of this study and have some collaboration in the review."

Graves said the department would not speculate on when the review might be completed.

Retailers and supplement makers have said they are cooperating with the effort, and said the services will determine the product to be safe.

One of the manufacturers, USPlabs, says recent testing - during which subjects were given DMAA supplements for two weeks - confirmed that the product is safe.

"At the beginning and end of the study, blood pressure, heart rate and various indicators of renal and liver function were assessed. The study found that there were no statistically significant changes from baseline to the end of the study. No serious adverse events were noted," the company said last month in a news release.

Still, the Army and Air Force Exchange Service and the Navy Exchange chose to recall all fitness supplements containing DMAA, and the Army launched a safety review in December after the deaths of two soldiers who collapsed during fitness training. There also have been reports of liver and kidney failure, seizures, loss of consciousness, heat injury and muscle breakdown, according to the Army.

Autopsies found that both soldiers had the substance in their bodies when they died, according to the service. The Army has not identified the soldiers, citing privacy rules, or disclosed the number of other health problems that could be linked to the supplement.

This month, the DOD said it will collect available studies on the supplement and all the services will share health data on DMAA with the Army Health Policy and Services Directorate and Army Public Health Command, which will continue to helm the investigation.

"While the review is ongoing and methodologies are still developing, we are seeking to include all credible information," Graves said. "We are including data from multiple sources to build a thorough review, including scientific studies and adverse event reports."

The military investigation comes about six years after DMAA hit the fitness supplement market in the United States. It was originally sold over the Internet in 2006 by a chemist who admitted to supplying steroids to BALCO, the laboratory responsible for one of the biggest professional sports doping scandals in U.S. history, according to an investigation by the Washington Post.

It has since been banned by Major League Baseball and the World Anti-Doping Agency as a performance-enhancing drug. The governments of Canada and New Zealand have also recently banned it as an unapproved synthetic drug.

But DMAA supplement sales are booming in the United States. Fitness retailer General Nutrition Centers said it has sold about 440 million supplements containing DMAA since 2007, but declined to release its military sales figures.

DMAA was listed as an ingredient in at least 15 products that were sold as workout performance boosters at GNC outlets in military exchange stores around the world, until the Army recall in December.

The military safety review has added to growing skepticism over whether DMAA is really a natural product that can legally be sold in the U.S. without first undergoing extensively FDA drug testing.

"I do believe these [military] deaths have added a lot of fuel to the fire," said James Neal-Kababick, an Oregon lab director with two decades of experience analyzing supplements, including ones containing extract from the edible geranium plant.

The marketing of DMAA as a flower extract is "all based on a house of cards that is completely false and erroneous," said Neal-Kababick, an outspoken critic of DMAA. "I've looked at hundreds of geranium oils and we've never seen that compound."

The claim that DMAA is natural has allowed supplement makers to "clandestinely" add a synthetic stimulant into products sold to servicemembers while avoiding the high cost of seeking FDA approval, he said.

The FDA does not approve dietary supplements before they are sold that already exist in the food chain and in the human body, but it does require years of testing and review of synthetic drugs to determine whether benefits outweigh health risks. Federal approval of a new drug costs up to $1 billion for private testing and monitoring Neal-Kababick said.

Companies began asking Neal-Kababick to analyze proposed DMAA supplement products in 2009, and his research led him to believe it is a potentially dangerous synthetic drug, he said.

The FDA declined to comment on DMAA or provide any information on its safety. The agency requires companies to report any health incidents that might have been caused by dietary products.

"FDA never confirms, denies or comments on whether or not there is an open investigation or pending regulatory action," FDA spokesman Siobhan DeLancey said in an email.

Last summer, the Canadian health ministry determined that DMAA is not an extract of geranium, making it an unapproved drug in that country. Additionally, research published in December shows the National Measurement Institute in Australia found no evidence that DMAA can be found naturally or created without synthetic material.

Claims that the supplement is found in geraniums appear to be a "marketing ploy," researchers concluded.

USPlabs, which makes the highly popular Jack3d and OxyElite Pro pre-work supplements, strongly denied the stimulant is a synthetic drug and maintained that its supplements are safe.

"DMAA is a constituent of the geranium plant. There is not a consensus - scientific or otherwise - to rebut those findings," company spokesman Wyeth Ruthven wrote in a response to Stars and Stripes. "Speculation and conjecture is not scientific consensus."

The substance is a mild stimulant similar to caffeine and has never caused a corroborated adverse health problem, according to Ruthven.

The company cited studies published late last year in an online peer-reviewed medical journal, which compared DMAA to caffeine and found it did not cause any negative effects to the blood, blood pressure or heart rate when taken by test subjects for a short period.

Still, the supplement industry changed tack on DMAA this month when the American Herbal Products Association, which represents more than 200 supplement makers including USPlabs, enacted a new code of ethics that directs members to avoid listing DMAA as an extract of geranium on supplement labels.

"We became aware that there were companies who were marketing DMAA as germanium oil and geranium stem," said Michael McGuffin, president of the AHPA. "When we looked at it closer, we realized they were selling a synthetic ingredient that was not derived from geranium."

But the trade organization has remained neutral on the regulation of DMAA and has seen no evidence that DMAA supplements are unsafe after millions of sales in recent years, McGuffin said.

"I think what we can say with certainty is there is no conclusion," McGuffin said. "We have strong opinions on both sides."