Military prepares for impact of SOFA 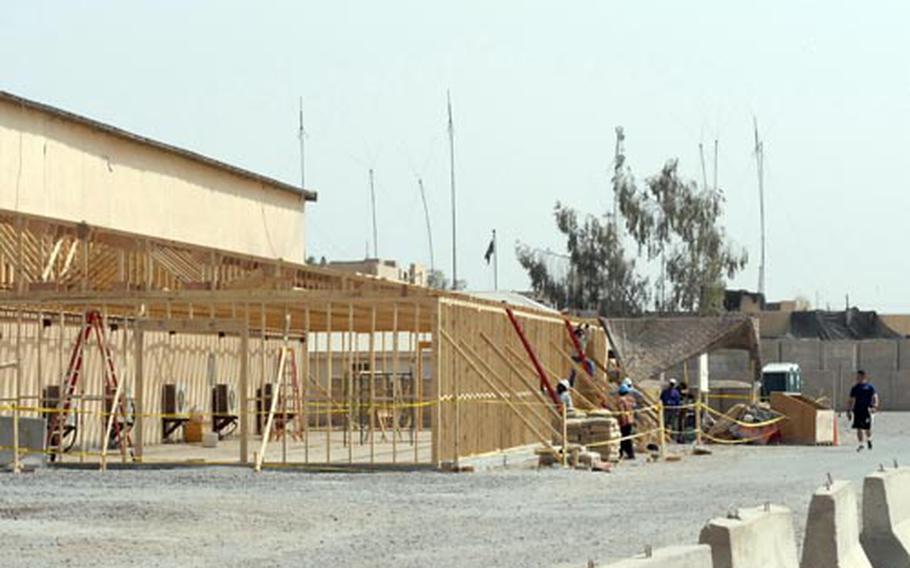 A construction crew works on the addition to Forward Operating Base Falcon’s main gym on Tuesday. The project is one of several planned improvements to the base, even though officials are unsure what the base&#39;s status will be next summer. (By Leo Shane / S&S)

A construction crew works on the addition to Forward Operating Base Falcon’s main gym on Tuesday. The project is one of several planned improvements to the base, even though officials are unsure what the base&#39;s status will be next summer. (By Leo Shane / S&S) 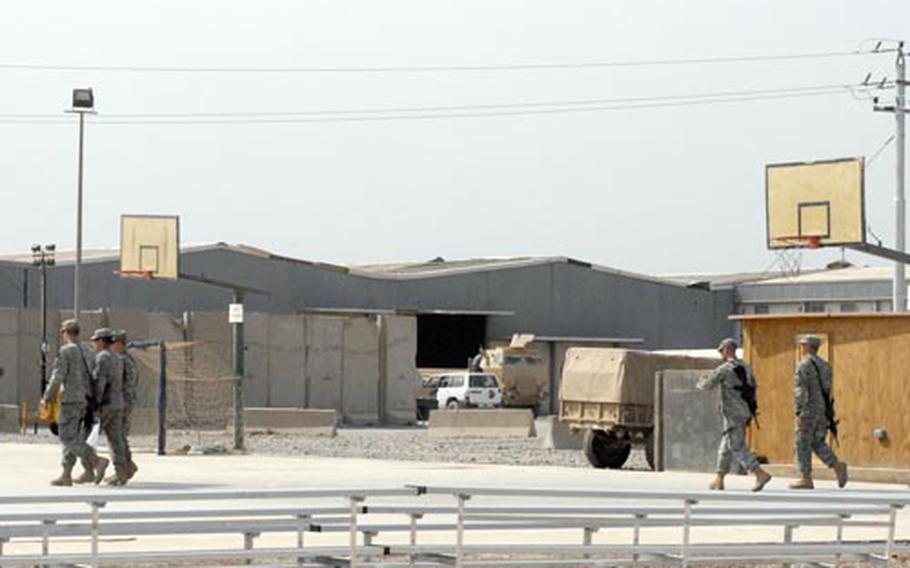 Soldiers walk across the basketball courts in the center of Forward Operating Base Falcon on Tuesday. Facilities like the courts and the nearby baseball field present difficult questions as officials contemplate the eventual handover of the base to the Iraqi government. (By Leo Shane / S&S)

FORWARD OPERATING BASE FALCON, Iraq &#8212; Military officials here could close up this southern Baghdad base within 100 days if they need to.

"That&#8217;s cutting it close," said Capt. Shannon Kelly, brigade engineer for the 1st Brigade Combat Team, 4th Infantry based at FOB Falcon. "There&#8217;s a lot of real property to be turned over to the government, military property to be moved. It&#8217;s really just a contingency plan."

But those plans could come under further scrutiny in coming months, as military officials prepare for the impact of the ongoing status of forces negotiations between U.S. and Iraqi government officials.

Earlier this week, Secretary of State Condoleezza Rice outlined a draft agreement between the two countries, one that could mandate all U.S. troops move out of Iraq&#8217;s major cities by June 30.

What that means to locations such as this base remains to be seen. The site, originally a small training post that took up a few warehouses, has expanded to about 2 square kilometers in recent years and is now the hub for U.S. operations in the Rashid District.

To the north, FOB Falcon faces some of Baghdad&#8217;s busiest highways and neighborhoods. To the south, it faces farmland and sparse development.

Brigade officials here have not received any word about the future of the base, but have been updating plans to scale back their presence in the Rashid District as part of normal force planning.

Maj. Mike Birmingham, plans officer for the brigade, said coalition forces currently hold 15 locations throughout the district in addition to FOB Falcon. Of those outposts, four could be closed or merged with nearby posts, as commanders rethink their strategic footprint in the area.

"You can get to the point where you have so many (outposts) that you spend more time securing yourself than the area," he said. "Some of these might be in areas that used to be important places, and some might be more effective elsewhere. They&#8217;re looking at all of that to see where we should be."

One place likely to close is COP 820, a few miles north of FOB Falcon. Kelly said the brigade has a plan to turn over the 2-acre site to its original homeowners within 45 days, once the official go-ahead is given.

That includes moving the company stationed there to another location, turning over beds and barbed wire to local Iraqi police, and finding a way to move more than a mile of 10-foot concrete barriers which currently twist through the outpost.

For a small post like that, the 45-day model is daunting but doable, said Lt. Col. Darren Werner, commander of the 4th Support Battalion. Enough trucks and personnel are positioned nearby to keep close to the schedule, and to help the company there move from their old home to a new one.

"But for something like this FOB, that&#8217;s a little bigger than the brigade," he said. "We&#8217;d need additional assets to come in from other locations. And if you&#8217;re talking about closing down (other outposts) at the same time, it becomes even more complex."

If most of the base were to be turned over to Iraqi security forces, the job would be simpler, Werner said. Certain trailers and headquarters could stay put, and much of the nearly 10,000 concrete barriers on site could stay as well.

But if the Iraqi government wants the area returned as a potential business district &#8212; its pre-war function &#8212; the area would have to be completely overhauled, on top of the already complex move of an entire brigade worth of personnel and equipment.

Officials here freely admit that a lot would depend on negotiations with local government and police officials. The Pizza Hut and Subway sandwich trailers would likely be moved no matter what; the baseball diamond and basketball courts on base could be left intact for the next occupants.

Werner said he expects plenty of warning from coalition commanders before he has to begin the process of clearing out from the base, but remains optimistic that it could be done within 100 days if need be.

"If we were tasked with just that, and given the resources we need, it certainly could happen quickly," he said.

"But whether that means closing this and the [outposts] at the same time, or if there are still other missions to do, that all has to be a high-level decision before we begin."

In the meantime, base officials are still proceeding as if they&#8217;ll be at the base for a while.

Major additions to the base gym and post exchange are already under way, and plans are under discussion for improvements to the dining hall. Housing officials are still working to move soldiers from tents into better-quality trailers.

None of those structures are permanent facilities, Birmingham noted. If they need to be torn down in coming months, they can be.