Military post offices get the hang of Mideast delivery 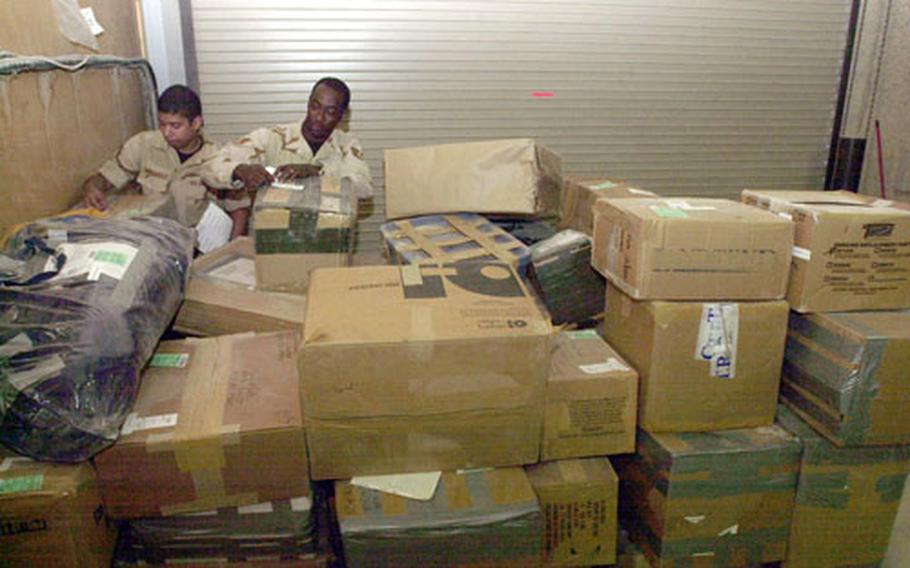 Postal clerks Airmen 1st Class Juan Melendez, left, and Staff Sgt. Albert King, official and registered mail manager, are almost lost behind a stack of boxes. Deployed postal clerks to the Middle East work all aspects at the post offices, not just their normal duties when at their home base. (Fred Zimmerman / S&S)

Postal clerks Airmen 1st Class Juan Melendez, left, and Staff Sgt. Albert King, official and registered mail manager, are almost lost behind a stack of boxes. Deployed postal clerks to the Middle East work all aspects at the post offices, not just their normal duties when at their home base. (Fred Zimmerman / S&S) 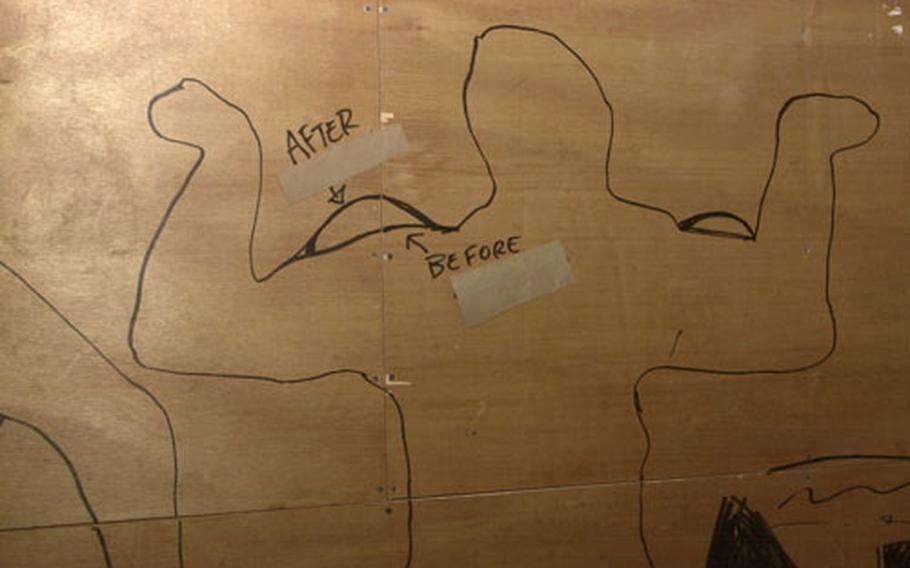 Military postal workers jokingly drew what their physiques are like before and after deployment to the Middle East. More than 5 million pounds of mail travel through the more than 80 post offices in the region. (Fred Zimmerman / S&S)

QATAR &#8212; For troops throughout Central Command&#8217;s area of operations, staying in touch with loved ones can be tough. Often there are no phones to pick up or computers with Internet access to fire off e-mails.

Many have to fall back on the centuries-old method of writing letters. More than 80 military post offices throughout the Middle East and Southeast Asia help those cards, letters and packages reach their final destination, according to Air Force Maj. Lonnie Hammack, who oversees postal operations for the area.

&#8220;Within the responsibility of transporting mail, we have to make sure we have enough airlift capabilities to bring mail in from the U.S. and get it to the troops, and vice versa,&#8221; Hammack said.

Postmaster Tech Sgt. Craig McCorquodale said that along with the high mail volume, another challenge post offices face is the tough weather.

Delivery by air is the preferred method, Hammack said, but sometimes the mail has to be driven to remote locations. Timely delivery is important and can be challenging, he added.

Hammack said that according to regulations, standard mail delivery should take between 12 to 18 days. The post offices in the region are beating that with an average delivery time of 12 to 16 days.

Earlier this year, Congress and the White House forwarded more than 300 mail complaints to the Government Accounting Office, which then conducted a survey. More than half the troops surveyed said they were dissatisfied with the mail system, waiting four weeks or longer for mail. They added that the slow delivery times had a negative impact on morale.

Hammack said that when Operation Iraqi Freedom started, it was hard to transport the mail into country.

&#8220;One of our biggest challenges after the war kicked off was finding ways to get the mail transported to the troops at the forward bases once it arrived at the major mail hubs,&#8221; Hammack said. &#8220;Most military transport, both ground and air, was being used for transportation of troops, food and ammunition. It took time to establish a reliable network of commercial air and ground transportation for mail.&#8221;

Hammack said constantly moving units created another challenge. The units were moving rapidly, and he said the mail would follow them whenever information on the unit locations were available.

Currently, there are more than 60 flights each week into Southwest Asia carrying mail, Hammack said. Those flights fly into one of five major hubs. More than 100 regional flights then carry the mail to forward bases.

In addition to more air delivery capabilities, Hammack said improved coordination between the services, more training for postal personnel and more postal equipment and supplies helped improve the mail process. While deployed, military postal clerks handle all aspects of mail delivery. They separate and retag mail for proper routing, as well as handle all registered and official mail.

Hammack said that the troops who run the post offices work hard to ensure customer satisfaction.

While the Air Force is responsible for the overall operation of all post offices throughout the region, each branch of the service runs individual offices on its camps. Hammack said all post offices are inspected once a year, to ensure they&#8217;re all on the same page.