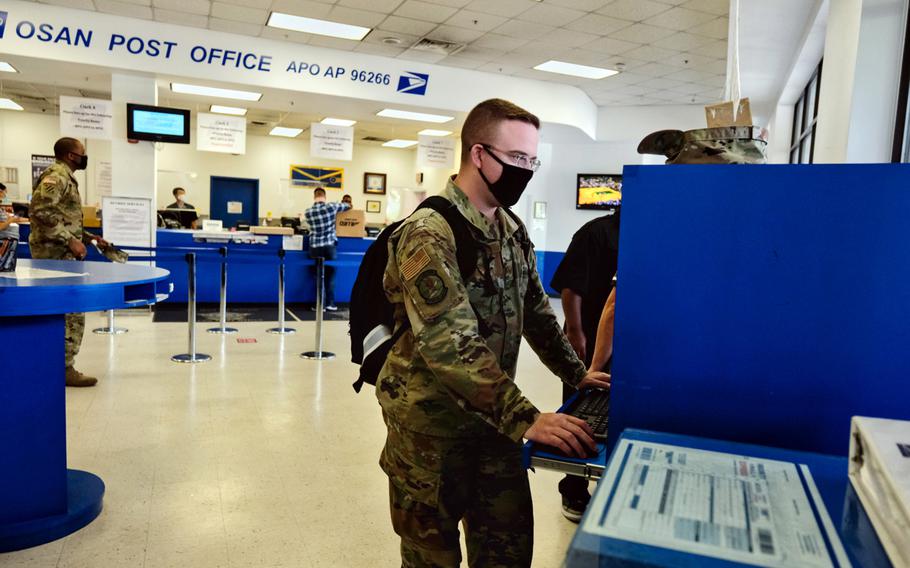 Buy Photo
Staff Sgt. Dustin Traylor of the 51st Fighter Wing uses a computer to fill out a customs form inside the post office at Osan Air Base, South Korea, June 16, 2020. (Matthew Keeler/Stars and Stripes)

Expect a line to use newly arrived customs form kiosks at post offices on bases in Europe and the Pacific, postal officials said ahead of a policy taking effect Thursday that bars acceptance of handwritten forms.

The kiosks, which include a computer, printer and a scale, are one of three ways service members and other Defense Department personnel can send packages from overseas bases to the United States or other countries under the new rules, postal officials said.

The U.S. Postal Service began transitioning to electronic customs forms in March due to international regulations but granted military post offices an extension through Thursday, the service said on its website.

Customers can still fill out handwritten customs worksheets when they mail their packages, but postal workers will need to type in all of the details to create electronic labels.

“That is the least preferred method from our point of view because it takes the most time for our people to process and makes the lines even longer,” said William Hilsher, postal and policy chief for U.S. Army Europe.

Customers can instead use the kiosks to print labels, which Hilsher said should be in place at all USAREUR post offices by Thursday. The kiosks also will be ready at all U.S. Air Forces in Europe post offices, service officials said Wednesday.

While many post offices overseas are rolling out the kiosks just ahead of the Thursday deadline, others like Osan Air Base in South Korea and Sasebo Naval Base in Japan have had theirs running for months.

Some postal workers said they expect delays at the kiosks and hope that customers will print their forms and shipping labels at usps.com, which would shorten wait times. Customers can find online customs forms underneath the international tab on the Postal Service website.

To speed up service, the Sasebo post office will set up a special line “for people with the customs form already printed out and another for the computer station,” postal manager Lewis Powell said recently.

However, filling out the forms online may be difficult for some overseas customers. The online forms require phone numbers but don’t accept some overseas phone numbers. The forms also ask for the weight of a package and a box selection in advance, with varying prices.

Customers that do print labels at home can pay their shipping costs online and drop off their packages after a clerk confirms the sizes and weights, Powell said.