Military pledges not to stick Guam with cost of utilities upgrades 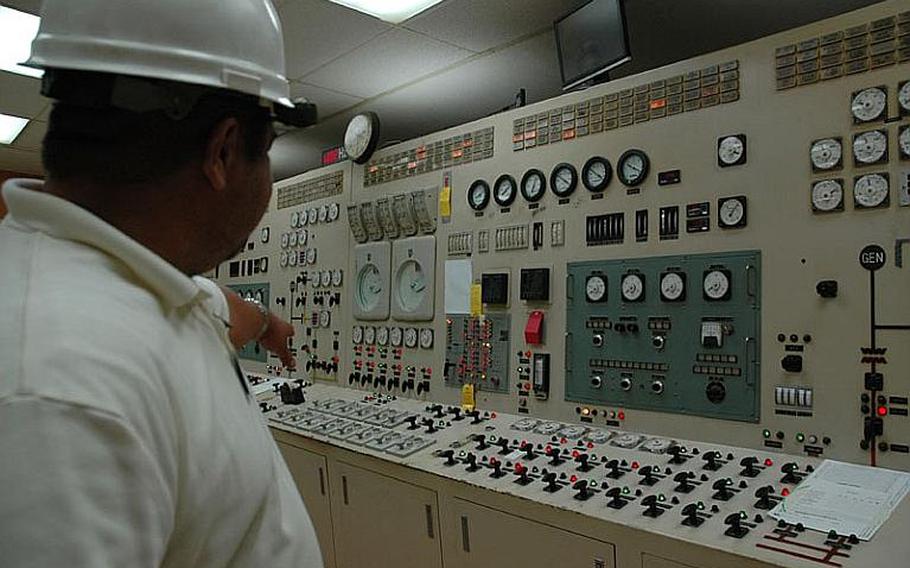 Frances Cruz, the assistant plant superintendent at the Cabras Steam Power Plant in Guam, points to a control panel during a tour of the plant in January. The island's system can generate enough power for the expected military buildup, with $110 million in upgrades to three turbines and distribution that the military is willing to support. Who will pay the $300 million needed to fix the island's sewage system is another matter. Still, an agreement signed last week by both parties pledged to keep local ratepayers from footing the costs of the military's plans. (Teri Weaver/Stars and Stripes)

TOKYO &mdash; Guam utility customers will not pay the millions of dollars in upgrades and expansions incurred as the U.S. military grows on the island, according to two agreements signed by military and utility leaders this week.

The agreements are not legally binding and do not make specific promises about who will pay the estimated more than $400 million for upgrades to existing power plants, improvements in treatment methods at sewage facilities or ensure that the island&rsquo;s northern aquifer remains a safe source of water.

Instead, the agreements are meant to give Guam a written pledge that the U.S. military does not expect the island to host 8,600 incoming U.S. Marines without the military footing the bill, according to Navy Capt. Peter Lynch, commander of Naval Facilities Engineers Command Marianas.

&ldquo;The local utility payers &mdash; their rates should not go up because the military is growing,&rdquo; Lynch said Wednesday afternoon. &ldquo;That would not be fair.&rdquo;

But how the military will execute that promise, contained in two memorandums of understanding signed July 16 by military leaders and utility directors on Guam, remains uncertain.

&ldquo;From our point of view, the fact that we have an MOU is progress,&rdquo; said Simon Sanchez, who chairs the island&rsquo;s Consolidated Commission of Utilities. &ldquo;The details are still sketchy.&rdquo;

The pledge to keep local ratepayers from footing the utility-improvement costs comes as a contingent of U.S. military leaders visits the island to give a final pitch to local politicians, government workers and activists for a buildup that will include the Marines, a berth to handle long stays from an aircraft carrier, and an Army air defense unit.

The meetings in Guam this week are to culminate on Friday with a public forum with military officials at the University of Guam. Protesters are planning to create a human chain along a local highway to dispute plans to build a firing range near an ancient Chamorro village.

On Wednesday, Lynch said the utility agreements also signaled the military&rsquo;s efforts to answer sharp criticism from the Environmental Protection Agency. In February, the EPA issued its harshest internal rating on the overall project, saying the military&rsquo;s plans &ldquo;should not proceed as proposed,&rdquo; unless altered.

Fixing Guam&rsquo;s utilities are a large part of that challenge as the military looks to add 35,000 people to an island of 178,000.

So far, the military and local officials agree on revamping the island&rsquo;s power grid. The island has enough power plants to meet the military&rsquo;s needs, which include an extra 30 megawatts for the new Marine site and another 25 megawatts for the aircraft carrier plug-in at Apra Harbor. (One megawatt typically powers about 600 homes.)

That $110 million upgrade to existing power plants and lines is the military&rsquo;s responsibility, Lynch said.

When it comes to water and sewage, discussions about who will fix what remain less clear.

No sewage treatment plant on Guam operates in full compliance with the EPA. The Marines&rsquo; proposed home is in the northern part of the island, an area also home to the bulk of the island&rsquo;s residents, the island&rsquo;s aquifer, and thousands of toilets that flush into septic systems &mdash; a situation the military and local officials want to fix.

But the $100 million needed to switch from existing septic tanks to a consolidated system? The military&rsquo;s not fully on board to pay that bill, both Lynch and Sanchez said.

&ldquo;The next phase is, specifically, what are the solutions?&rdquo; Sanchez said. &ldquo;And how are we going to pay for it?&rdquo;

A visit next week from a delegation of Japanese officials may provide some answers.

The Marines will move from Okinawa to Guam as part of a base relocation agreement between the United States and Japan. Japan has agreed to pay almost two-thirds of the estimated $10.3 billion cost of the move, including $740 million set aside to help with building the Marines&rsquo; utility systems.

How Japan might invest that money in utility projects outside the bases remains to be seen.

&ldquo;It&rsquo;s the beginning of a longer journey,&rdquo; Lynch said.