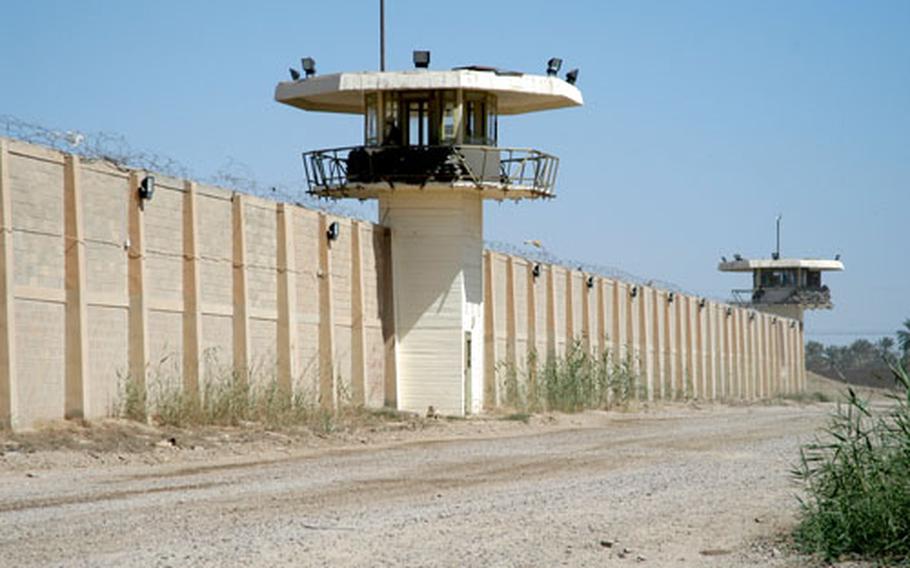 The U.S. military plans to turn Abu Ghraib prison over to the Iraqi government in February or March. (Michael Abrams/Stars and Stripes)

The U.S. military is planning to hand over the notorious Abu Ghraib prison to Iraqi control early next year after expanding three jails to house thousands of prisoners, Stars and Stripes has learned.

&#8220;At sometime in the future, yes, that is the plan,&#8221; Lt. Col. Guy Rudisill, spokesman for Multi-National Force-Iraq&#8217;s detainee operations stated in an e-mail interview from Baghdad.

The plans call for U.S. forces to move an unspecified number of &#8220;prisoners of interests&#8221; now detained at Abu Ghraib to Camp Cropper, a U.S. detention facility near Baghdad, where they would remain under U.S. control, said a civilian member of U.S. Army Europe headquarters, speaking on condition of anonymity.

The civilian said the plan called for the transfer of prisoners in February or March. The headquarters for the U.S. military&#8217;s detention operations would also move from Abu Ghraib to Camp Cropper.

The Camp Cropper expansion will increase its holding ability from 163 prisoners to 2,000, said Lt. Col. Stan Heath, a spokesman for the U.S. Army Corps of Engineers&#8217; Gulf Region Division in Baghdad. The corps is heading up the $23 million project, which began in June.

Camp Cropper currently houses 135 detainees, officials said. Several news organizations have quoted the Iraqi human rights minister as saying that Saddam Hussein is being held there. Rudisill would not say where Hussein was detained, other than in a &#8220;secured location.&#8221;

The plan would sever the U.S. association with Abu Ghraib, where photographs released worldwide in April 2004 showed U.S. soldiers and others abusing and humiliating prisoners.

The resulting scandal prompted numerous investigations; seven enlisted soldiers were court-martialed for their roles while the two officers in charge of the prison were reprimanded or demoted. Some government investigations found failures of leadership at top command levels but said those same leaders had performed admirably considering the lack of manpower and resources.

But Rudisill said handing over Abu Ghraib to the Iraqis was always planned, and that it was his understanding that the Iraqi government wanted to close the prison.

Rudisill said about 4,200 prisoners are being held currently at Abu Ghraib. Some of them, he said, would be transferred to either Camp Bucca or Fort Suse, where expansion projects also are under way.

The Camp Bucca expansion, expected to be completed by October, would allow an additional 1,400 &#8220;security detainees&#8221; to be held there, Rudisill said.

Plans call for Fort Suse, a former Iraqi military barracks, near Sulaymaniyah in northeastern Iraq, to hold about 2,000 security detainees. Renovation there is scheduled to be completed Sept. 30, Rudisill said.

He said detainees were released frequently, beginning in August 2004 when a review board containing six Iraqi officials and three U.S. military members was set up. Since then, he said, the board had reviewed the cases of 16,600 detainees throughout Iraq and recommended about 9,200 be released. Most of those were released, he said.

The International Committee of the Red Cross, which first raised alarms about how Abu Ghraib prisoners were being treated, claimed that 70 percent to 90 percent of those imprisoned had been &#8220;arrested by mistake.&#8221;

That was a conclusion also reached by Brig. Gen. Janis Karpinski, who was in charge of the prison when the scandal broke. According to transcripts obtained by the American Civil Liberties Union, Karpinski told an investigator after the scandal broke that U.S. commanders were reluctant to release detainees, even if they were innocent, an attitude she called &#8220;releasophobia.&#8221;

In May 2004, Maj. Gen. Geoffrey Miller, who came to Iraq after overseeing the Guantanamo Bay detention facility in Cuba, vowed to reduce by half what were then 3,800 detainees at Abu Ghraib. He said only a &#8220;small number&#8221; of detainees had been wrongly imprisoned but that procedures for releasing suspects after determining they were not a threat to U.S.-lead coalition forces were taking too long &#8212; four to six months. The number of detainees there has since increased.