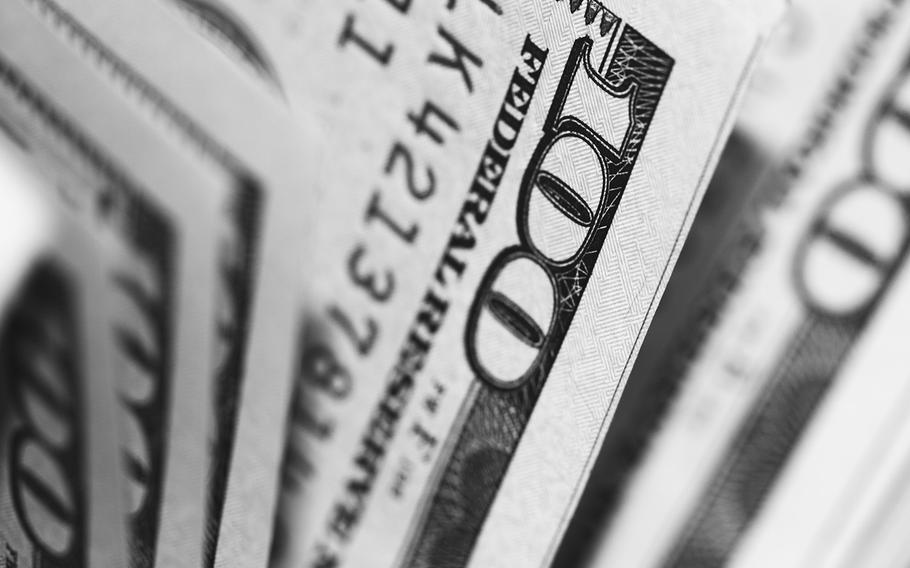 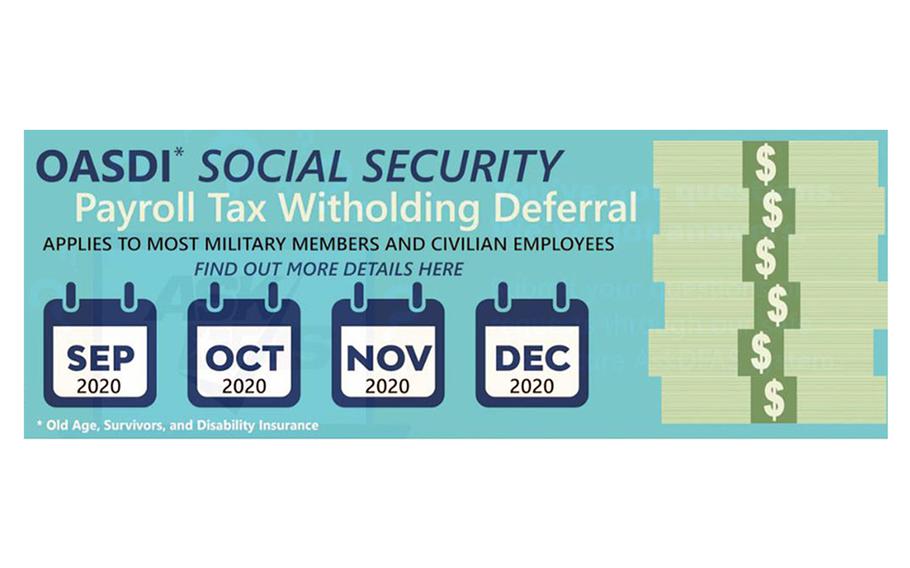 A graphic on the Defense Finance and Accounting Service's website. Service members and civilian DOD employees will see a temporary increase in their paychecks this month through the end of the year when President Donald Trump's payroll tax deferral goes in effect, but they will likely have to repay the money starting in January. (DFAS)

KAISERSLAUTERN, Germany — Many servicemembers, including all enlisted personnel, will see a temporary increase in their paychecks this month through the end of the year, followed by a fall in January, when they are likely to have to start repaying the money.

“Unfortunately, neither military members nor civilian employees are eligible to opt out of the deferral,” Chief Master Sgt. of the Air Force JoAnne Bass tweeted Monday.

“The extra money we will get over the next few months, will be paid back next year,” she said, advising leaders to “make sure your Airmen and families are tracking to prevent financial strain in the future.”

Trump last month directed the Treasury Department to allow employers to stop withholding the 6.2% tax on income that employees contribute to Social Security as a way to help workers during the coronavirus pandemic.

While employers in the private sector can decline to apply the tax deferral to their employees, participation is mandatory for active-duty members and civilian employees of the federal government whose social security wages fall within certain limits, said the Defense Finance and Accounting Service, which handles pay for 6.5 million military personnel, civilians and retirees.

For them, “The deferral will happen automatically,” DFAS said on its website.

The deferral will apply to civilians who make $4,000 or less per pay period, and military members who clear $8,666 or less of basic pay per month. It will affect all enlisted personnel, officers in ranks from second lieutenant to major; lieutenant colonels and colonels with less than 16 and 14 years of service, respectively, and all warrant officers, except those at a grade of W5 with 24 or more years of service, according to DFAS guidance.

Military members can expect to see the first temporary pay boost in their Sept. 15 paycheck. Unless Congress passes legislation to make the deferral a tax cut that doesn’t need to be repaid, they can also expect to see a 12.4% drop in pay for the first four months of 2021 as they repay the deferred taxes.

Postponed taxes will be withheld from wages in even amounts from Jan. 1 to April 30, 2021, DFAS said. They cannot be repaid in a lump sum.

One of the largest military commands in Europe is advising its soldiers and civilians to “formulate a plan” for saving the extra money or putting together a budget to ensure “you have a plan to meet your financial obligations after Jan. 1,” said Master Sgt. Dan Bailey, spokesman for the 21st Theater Sustainment Command based in Kaiserslautern. Garrisons have financial aid counselors who can help soldiers with budgeting, he said.

Some in Europe have expressed dismay at not being able to opt out of the plan.

“How does this help relieve financial hardship?” said one comment in response to a post on the Kaiserslautern Legal Center’s Facebook page. “If anything, it’s going to stress people out more trying to make sure they put enough aside to pay off the unwanted debt.”

The Federal News Network first reported last week that military personnel and civilian employees would not be able to opt out of the deferral.