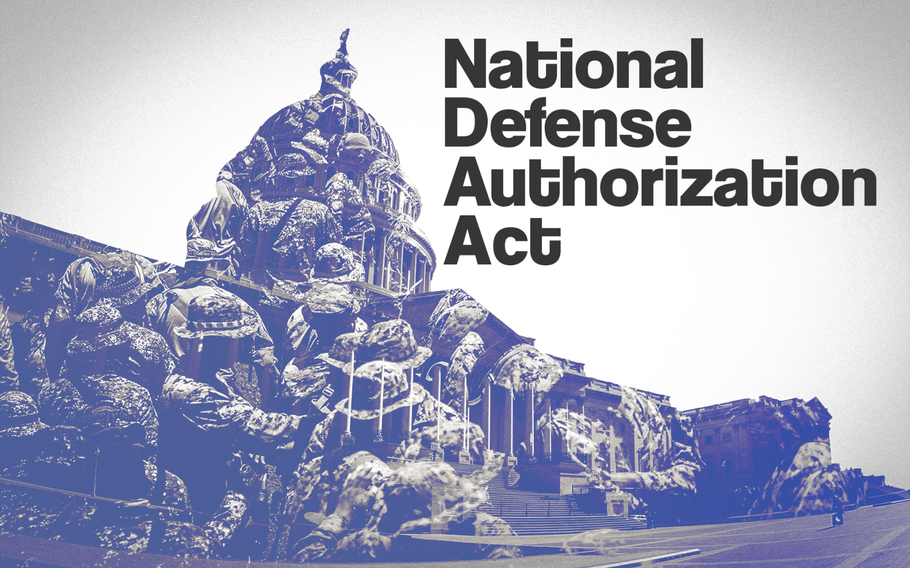 In the two previous years, the NDAA was signed into law in December, months into the new fiscal year.

“What stands out to me is how early in the year the bill got done,” said Molly Reynolds, a governance studies fellow at the liberal-leaning Brookings Institution, a Washington think tank. “In recent years, the NDAA has become a year-end activity, so getting it sent to the president before the August recess is notable.”

The legislation, H.R. 5515, moved in quicker fashion with a two-year spending deal in place that lifted budget caps, midterm elections this fall and a more experienced White House administration at the helm.

But how the government pays for the plans remains to be seen.

The legislation moves on two tracks. The annual NDAA sets policy changes, expenditures for the military and how the money will be spent. A defense appropriations bill, which might be included in a larger, omnibus government funding bill, is what actually moves money over to the Pentagon to pay for the spending plan.

Here are five key breakouts of the 2019 NDAA:

Lawmakers must race against the clock to pass a defense appropriations bill. With a new NDAA in place, lawmakers must now negotiate a deal on how to pay for the plan’s $717 billion tab in time for the start of the 2019 fiscal year Oct. 1.

“There’s a chance it gets done before Oct. 1, but plenty could prevent that,” Reynolds said.

The House is on recess until Sept. 4, while the Senate returns Aug. 15 from an abbreviated break.

Trump also has threatened not to sign off on government spending plans if there isn’t enough money to build a wall along the U.S.-Mexico border.

This, as Republican lawmakers plan to hold hearings and votes on his Supreme Court nominee, Judge Brett Kavanaugh, in the coming weeks, which could divert valuable Capitol Hill time.

Reynolds said the appropriations measure could get linked with a Labor and Health and Human Services spending bill in the Senate to make passage easier.

Without such a spending measure in place by Oct. 1, lawmakers might need to pass a temporary budget measure, which is known as a continuing resolution, to keep the government afloat until a permanent plan is in place.

Pay and benefit boosts for servicemembers and reforms to the “up or out” promotion system. With a 2.6 percent pay raise in place, which is slated to go into effect Jan. 1, servicemembers will see their wages increase at its highest level in nine years.

Servicemembers should see the increases in their first paychecks of the new year on Jan. 15, 2019.

“It clearly signals that Congress wants military pay to be competitive,” said Mark Cancian, a senior adviser with the Washington think tank Center for Strategic and International Studies.

The pay increases still aren’t as high as ones in 2008, 2009 and 2010, when servicemembers saw hikes of 3.4 percent or more. Also, servicemembers’ pay raises will compete against rises in inflation. On Friday, the Department of Labor reported the cost of living rose 2.9 percent for the year ending in June 2018.

“Always tough to get it right, because we will not know the inflation rate for calendar year 2019 until January 2020,” said Andrew Sherbo, a University of Denver finance professor who has tracked government and defense budget issues.

The legislation also directs benefit improvements and personnel reforms. For example, it enhances reforms of the Military Health System and installs the most widespread changes to the Defense Officer Personnel Management Act since it was enacted in 1980.

DOPMA, which standardized military promotions across the armed forces, will now let the services use civilian experience to establish new ranks for entering servicemembers, let certain officers promote faster and the expectation of retirement if a servicemember fails to promote twice could be removed.

In addition, servicemembers could also see higher per diem reimbursements in cases where they travel more than 30 days under the NDAA’s changes.

Force to increase by more than 15,000 servicemembers The NDAA will also increase the size of the Army, Navy, Air Force, Marine Corps, Naval and Air Reserve and Air Guard.

The Trump administration request for the 2019 fiscal year included an increase of more than 15,000 active-duty troops, which lawmakers matched in the final NDAA.

While significant, it’s a modest increase when compared to the legislation’s spending in other areas, Cancian noted.

“The force structure increases are relatively modest,” Cancian said. “They were modest in the budget proposal in the NDAA and that reflects the tradeoffs you have to make… You can’t do everything. And the emphasis has been on readiness and modernization, with force increases being third.”

“The NDAA helps develop a more lethal and resilient force,” the White House said in a statement.

For example, it authorizes a fourth Ford-class aircraft carrier, funding for a Columbia-class ballistic missile submarine and $1.6 billion for three Littoral Combat ships.

The efforts build on the National Defense Strategy to grow the size and might of the military in response to China and Russia’s growing capabilities, Cancian said.

“Congress is sending a clear message. It wants to reorient the department towards great power conflicts and do that more quickly,” he said. “The National Defense Strategy focused on long-term competition with Russia and China.”

It also requires the Department of Defense Education Activity to establish policies and procedures to extend new protections to students at Defense Department schools who are juvenile victims of sexual assault and harassment.

The law also includes provisions to establish multidisciplinary teams of social workers, advocates, investigators and others for military installations focused on child abuse and domestic violence. It authorizes a pilot program to prevent child abuse through training on safe childcare practices among military families.

It also lets servicemembers exposed to domestic violence or sexual assault move quickly to a new unit. And it directs a study of intimate partner violence and child abuse to collect data on such incidents.

“The UCMJ did allow prosecution…but now (domestic violence) will be” a crime, said Scott Anderson, a governance studies fellow at the Brookings Institution. “It also provides a number of resources and efforts to analyze military families’ childcare services.”

It also expands authority for federal agencies to hire military spouses, addressing a concern for families that move around frequently.