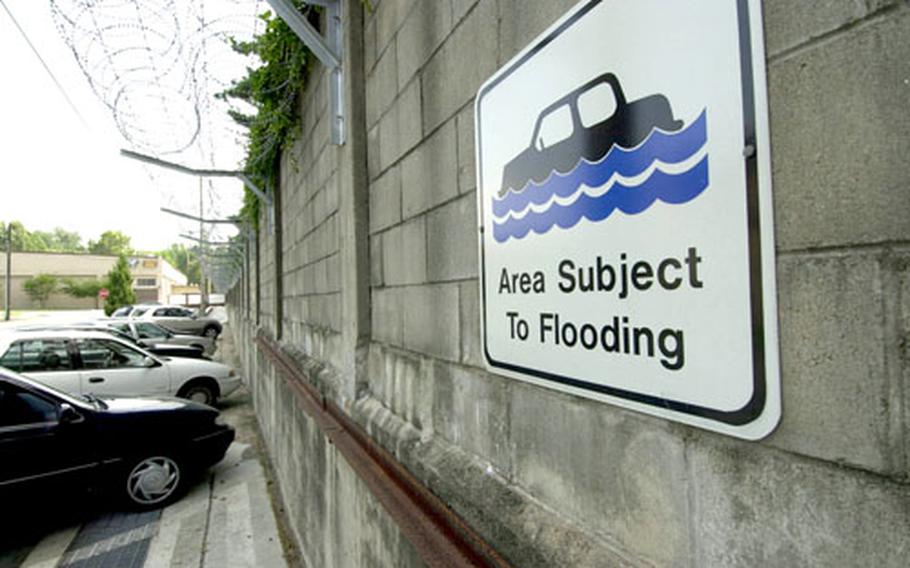 Signs like this one, near the bowling alley on Yongsan Garrison, South Korea, warn community members not to park in low-lying areas during monsoon season, which runs through the end of August. (T.D. Flack / S&S)

Even though personnel can submit claims up to two years from the date of damage, filing early is the best bet, said Capt. Mary A. Leavitt, with the U.S. Armed Forces Claims Service, Korea.

Leavitt&#8217;s office on Yongsan Garrison works claims for all personnel on the peninsula. The office also provides technical guidance to Camp Zama, Japan, and Torii Station on Okinawa.

As soon as someone files a claim, investigators such as James D. Clark will visit the scene. Clark said there are field offices at Camp Red Cloud, Camp Casey, Camp Henry and Camp Humphreys covering all of South Korea.

The claims process isn&#8217;t an insurance policy, officials say, and it only covers people who are officially housed by the U.S. government.

For example, a soldier living off-base on unaccompanied orders who brought his family at his own expense cannot submit damage claims for the family&#8217;s belongings.

The maximum amount of damage that can be claimed is $40,000, Leavitt said. The Korea office can authorize damage claims up to $25,000. Anything exceeding that amount must be sent to the Army Claims Service at Fort Meade, Md.

In an unusual natural disaster with extraordinary circumstances the Army can authorize up to a $100,000 damage claim. One example, Clark said, was when military homes were destroyed after Mount Pinatubo erupted in the Philippines in 1991.

Officials stressed that personnel should consider commercial renters&#8217; insurance to help cover their belongings &#8212; especially if they have expensive jewelry, electronics or collections. The military can only reimburse a maximum of $4,000 for jewelry, with a maximum of $1,000 for any one piece, Clark said.

But the military can work with the commercial insurance company, which can be beneficial to the claimant, Clark said. It might be possible that both the government and the insurance company each reimburse $1,000 for that one piece of jewelry, he said.

Clark stressed that people must prove ownership and value, which can be difficult if the items were swept away in a flood. He suggests that people compile high-value lists and take photos to help inventory their property.

Monsoon rains hit Korea from early June through the end of August, sometimes with deadly consequences. From Aug. 3 to Aug. 13, 1998, more than five feet of rain fell, killing three 8th Army soldiers and resulting in millions of dollars worth of property damage.

Mitigation: Avoiding driving or parking vehicles in or near low-lying areas susceptible to flooding, officials stress. Watch for hidden potholes or missing manhole covers if you&#8217;re forced to drive through pooled water. During thunderstorms or flooding, turn off and unplug electronic devices and be aware that power surges usually occur after power is restored. If the power goes out, keep freezer and refrigerator doors closed to prevent spoilage.

What to do: Do not throw away damaged items until claims for them are approved. If items are mildewed and present health hazards, make sure to take photos before throwing the items away. The photos help substantiate ownership and condition of the items. If items were washed away, you&#8217;ll need a detailed list and a statement signed by a neutral party to help prove you owned the item.