Military officials in Bahrain take precautions ahead of protest anniversary 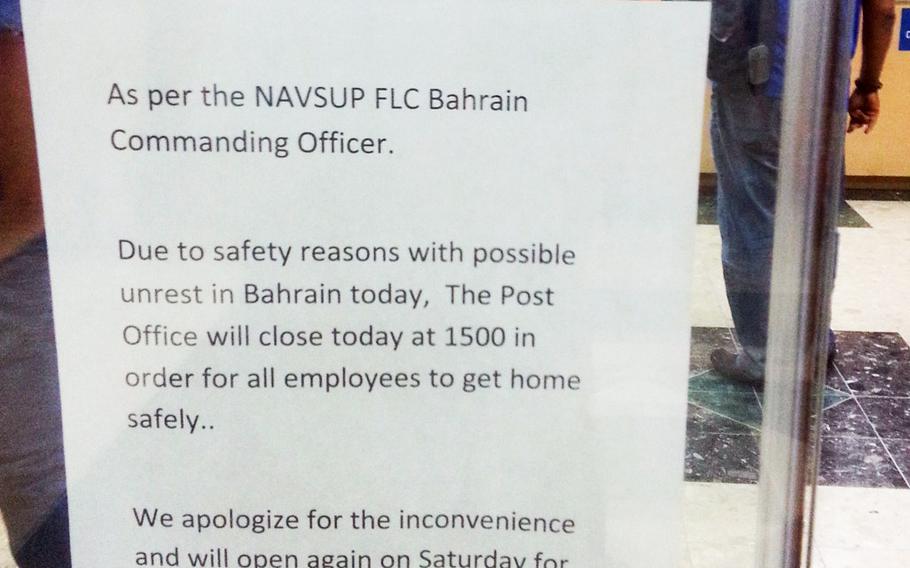 The tiny island kingdom, home to the U.S. Navy 5th Fleet, has been the site of sporadic demonstrations since February 2011, when the country experienced massive protests by citizens demanding political and economic reforms. Since then, around Feb. 14, the anniversary of that movement, the country experiences an uptick in protests and violence.

The Department of Defense Dependents Schools-operated Bahrain School was closed Thursday as a “prudent action,” according to Navy officials. U.S. Navy 5th Fleet spokesman Cmdr. Jason Salata says the decision was based more out of concerns over increased traffic and more police checkpoints throughout Bahrain.

“Closing the school today was one such prudent action, other actions are up to individual leaders to adhere to guidance released by the Navy and the U.S. Embassy,” said Salata.

Earlier in the week the U.S. Embassy issued a reminder to citizens about increased protests, attempts to disrupt traffic and potential clashes with police for several weeks after the anniversary.

While 5th Fleet and base operations were running as normal, according to officials, some tenant units cut hours to allow workers to go home early.

According to Bahrain’s Ministry of the Interior, there was vandalism in some villages Thursday morning that included burning tires and makeshift roadblocks. Once such incident occurred in a village adjacent to the base, but there were no signs of increased security on base throughout the day as a result. In the commercial areas around the base it was business as usual.

A tweet on the ministry’s Twitter page said police forces responded and restored order in the various incidents. Police also responded to a morning attack on a school bus with Molotov cocktails. Police evacuated the bus, and no injuries were reported. A video posted on the Ministry of Interior’s YouTube page shows the incident.

“We encourage all personnel to stay current on their knowledge of local events through the use of social media, local radio and newspapers, as well as official command and U.S. Embassy information releases,” said Salata.