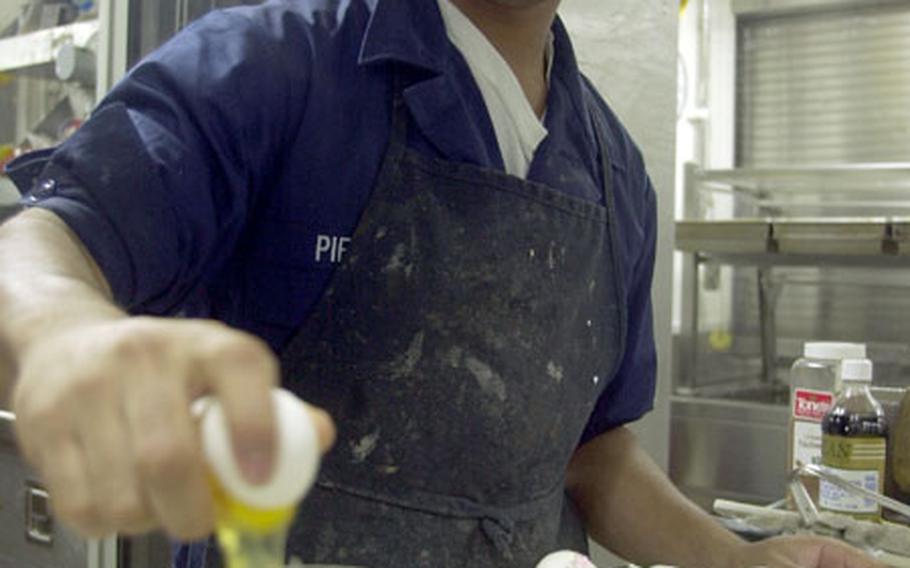 Petty Officer Rodriquez pulls the night shift on the USS Cowpens, cooking at 2 a.m. Wednesday on theYokosuka, Japan-based guided missile cruiser in the northern Persian Gulf. The ship&#39;s rolling slides his cakes around the oven, and they usually end up lopsided. (Kendra Helmer / S&S)

Petty Officer Rodriquez pulls the night shift on the USS Cowpens, cooking at 2 a.m. Wednesday on theYokosuka, Japan-based guided missile cruiser in the northern Persian Gulf. The ship&#39;s rolling slides his cakes around the oven, and they usually end up lopsided. (Kendra Helmer / S&S) 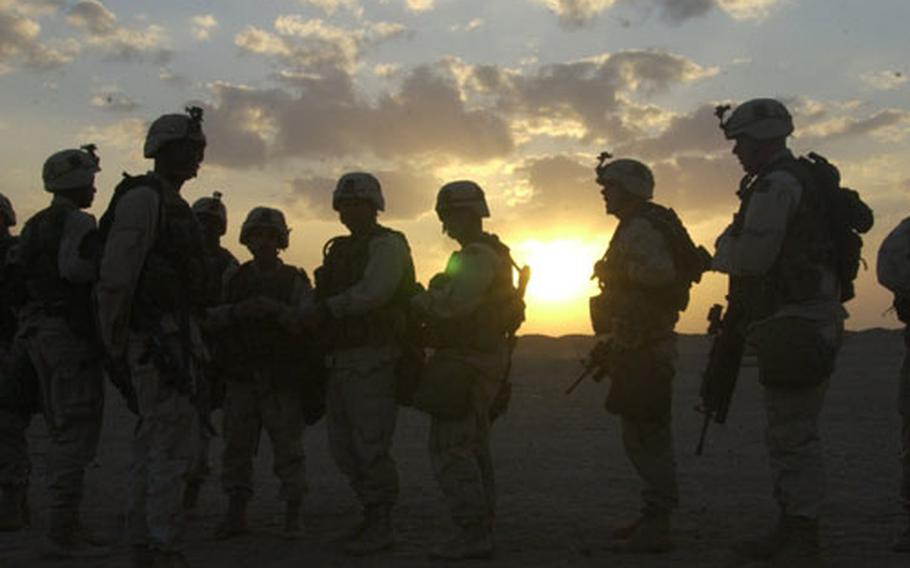 Soldiers from Company A, 1st Battalion, 15th Infantry Regiment stand in a chow line as the sun sets over Assembly Area Hammer in the northern Kuwaiti desert. (Joe Giordono / S&S)

What time is it? What day is it?

That&#8217;s not an easy question for some Marines in Camp Coyote to answer.

Marines training in the Kuwaiti desert are living on Zulu time &#8212; the military&#8217;s universal time zone for coordination. That makes adjusting watches, as well as schedules, difficult.

Noon meals run at 9 a.m. Zulu. Reveille, or the wake-up call at dawn, usually runs at 3:30 a.m. Zulu. Hunger strikes at the end of the day as the sun is setting, but the watch reads 2 p.m.

On top of that, it&#8217;s tough to keep up with the days. Mondays are much the same as Thursdays.

But there are a few markers. Marines at Camp Coyote count on a hot chow about every second or third day, and Sundays offer church services with the chaplains.

But two of the biggest days that most are concentrating on are unknown: the day the war kicks off, and the day Marines finally go home.

Cooking up a challenge

Cooks on military ships cruising around the northern Persian Gulf say baking is no cakewalk &#8212; especially when it comes to cakes.

&#8220;It comes out lopsided just about every time,&#8221; said Petty Officer Rodriquez Pierce, 21, galley baker on the USS Cowpens, a guided missile cruiser that continuously rocks gently side to side.

On the USS Kitty Hawk, the movement is much less noticeable, but still poses a cooking challenge.

While Pierce puts aluminum foil on the oven bottom to lessen the mess, the cook for the aircraft carrier&#8217;s commanding officer said he puts cardboard under the cakes, and turns them halfway through cooking time so they&#8217;re more even.

Another pain, said Petty Officer 1st Class Tim Saxon, is that &#8220;the oven doors close on you sometimes when the ship rocks.&#8221;

Back in the good ol&#8217; days &#8212; a couple of weeks ago, that is &#8212; V Corps soldiers walked around their bases in Kuwait relatively unencumbered, carrying only their gas masks and their unloaded M-16s.

Last week, however, a new order came down. Now the troops here are beginning to resemble snails, crawling around with their homes on their backs.

Besides their masks and rifles, soldiers now must carry a long list of other gear when they leave their tents: a Kevlar helmet, a pistol belt, ammunition pouches, two canteens, a complete chemical protective suit, a flashlight and a first-aid kit.

All this weighs about 35 pounds, although bulk is a bigger problem than weight since soldiers are accustomed to hefting heavy loads.

The order has caused some muted griping, because the threat level on these well-guarded bases doesn&#8217;t seem to justify carrying all that gear all the time.

Coffman said the imminent danger isn&#8217;t the main reason for imposing the order now. It&#8217;s to get soldiers used to carrying the stuff, so it&#8217;s second nature if there&#8217;s a bigger threat later.

When the SCUDs rain down, it&#8217;s one thing to leave your car keys, and quite another to forget your chemical suit.

The 2nd Squadron, 6th Cavalry Regiment is tired of being everybody&#8217;s sugar daddy.

The soldiers departed their home in Illesheim last October without fanfare. They trained alone for four months under a media blackout imposed by Central Command, fending for themselves as their Air Force &#8220;brothers&#8221; at Ali al Salem Air Base barred them from the base PX, medical clinic and swimming pool.

By the time they moved to Camp Udairi in late January, they were set up pretty nicely, with a weight room, a big-screen TV and a few other amenities.

Which is why they got their backs up a bit when other units arrived from Germany and United States, then tried to cadge phones, generators, cots, cords and what have you.

This week, things have been getting testy.

First, someone made off with a truck from the 2nd Squadron&#8217;s motor pool Saturday night. The next day, a 2-6 Cavalry mid-grade officer chased off a senior warrant officer from 11th Aviation Regiment as he drew from a water buffalo. 11th Aviation&#8217;s buffaloes are locked up behind concertina wire, awaiting future use.

Troops in the 1st Battalion, 15th Infantry Regiment are trying everything to keep their minds occupied at their remote desert camp.

Now, a series of competitions is heating up between the infantrymen of Company B and the tankers of Company B, 1st Battalion, 64th Armor, which is cross-attached as part of the larger Task Force 1-15.

A few days back, it was a series of wrestling matches illuminated by lights from an M1-A1 Abrams tank. On Sunday, it was a pair of Dust Bowl football games between the two units.

The infantrymen used their hand-to-hand combat training to win the wrestling matches; the tankers pulled out a one-point victory in the cumulative football scores.

Birds of a feather

At last week&#8217;s Sunday services at Assembly Area Hammer, a white dove flew in and buzzed the assembled soldiers. It was the first bird the troops had seen since arriving at the barren desert camp in Northern Kuwait.

This week, a pair of less-welcome birds was spotted around the camp: vultures.

The ugly, brown scavengers were going through trash piles and sunning themselves in the sand.

Soldiers hope the vultures aren&#8217;t an omen of things to come.