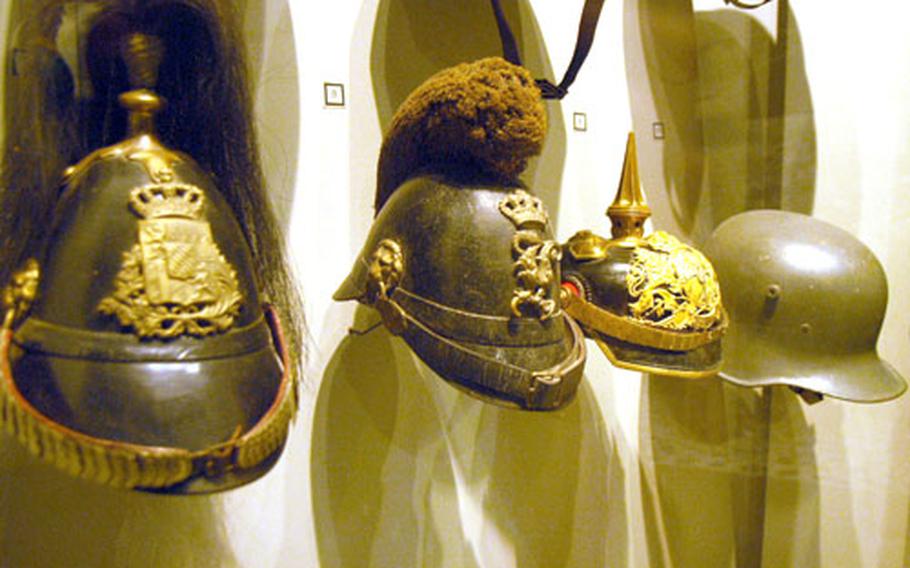 A case of helmets at the museum shows part of the evolution of German military equipment in the early decades of the 20th century. ()

GRAFENW&#214;HR, Germany &#8212; In a stroll through the Oberpf&#228;lzer Kultur und Milit&#228;rmuseum in Grafenw&#246;hr, it can be hard to take your eyes off the eerie, semi-embalmed look of the dummies used to display the historic uniforms and helmets, but it&#8217;s worth it to read the fine print.

Situated next to the various helmets, weapons, photos and assorted military paraphernalia that pack the walls at the area&#8217;s most extensive exhibit on the nearly 100-year-old training area are English explanations that contain some of the most interesting trivia about the base.

One of the largest artillery pieces ever built, for instance, a massive gun named Dora, used to sit at the railway just down the street. Elvis had his hair cut at the same post Benito Mussolini used to visit, and German army doctors here performed 41,585 arm amputations during World War II.

The odd assortment of facts is part of a local exhibit garnering special attention this summer as the local German and American communities celebrate a trio of anniversaries related to the training area.

This year marks 95 years of use of the training area, the 60th year since the arrival of American forces, and the 50th anniversary of the local German army units, which have a series of summer events labeled as 95-60-50 celebrations.

The exhibit, chronicling 100 years of history, offers a trove of factoids both eyebrow-raising and grim, including the revelation that the area was a target for Allied war planners in 1945 and was heavily bombed on two occasions.

Visitors to the museum can get insights beyond the World Wars, tracing the training area&#8217;s evolution from a swampy tract of farmland in the early 1900s to the eventual center of gravity for the U.S. Army&#8217;s training in Germany.

Walking through the decades of development in a small maze of maps, photos, and short documentaries, visitors follow the progress of the town and training area through the ebbs and flows of German forces between 1910 and 1945, and the buildup of American forces during the Cold War. A special section focuses on fatal accidents on the post, one of which killed 16 U.S. soldiers.

A separate display in the upstairs portion of the museum also documents the horrors of war, with exhibits on casualty numbers and treatment of prisoners.

It takes about an hour to walk through the exhibit, housed directly next to Grafenw&#246;hr&#8217;s historic downtown area. The museum is open Tuesdays, Wednesdays, Thursdays and Sundays from 2 to 4 p.m. Admission is 1.50 euros.