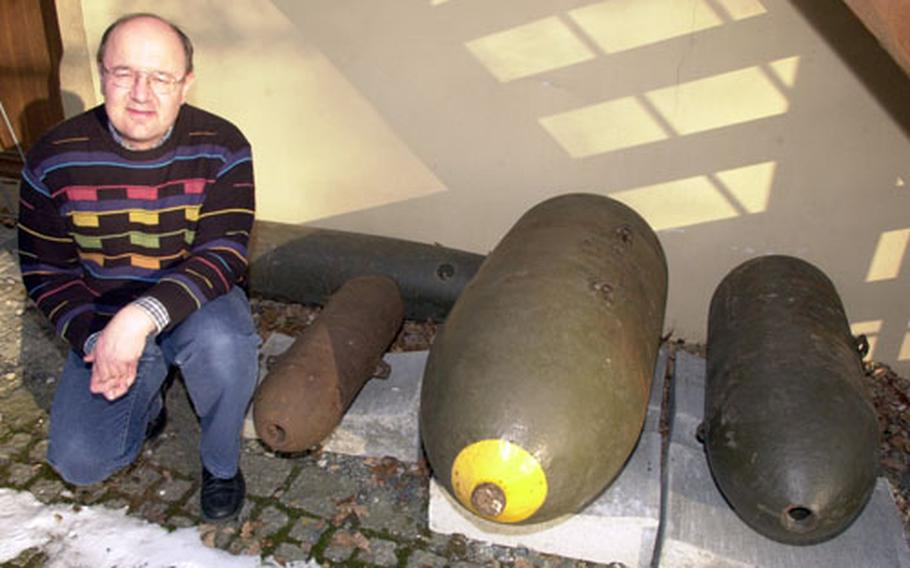 Grafenwöhr Military Museum curator Olaf Meiler with some of the bombs dropped on the town and post on April 5 and 8, 1945. (Seth Robson / S&S)

Grafenwöhr Military Museum curator Olaf Meiler with some of the bombs dropped on the town and post on April 5 and 8, 1945. (Seth Robson / S&S) 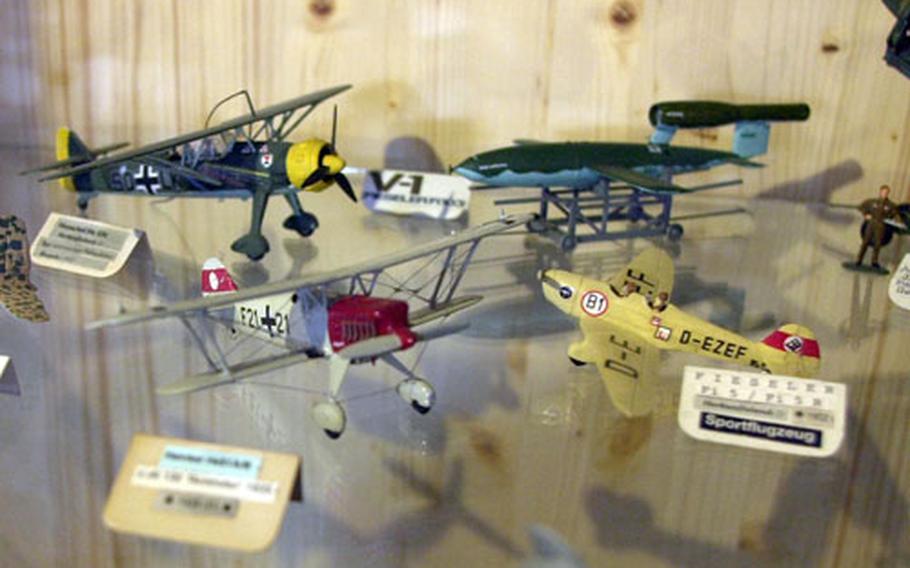 The museum opened a display of 150 model military aircraft in January to complement its collection of German and U.S. military items, said Olaf Meiler, the museum&#8217;s curator.

However, German aircraft dominate the display. And with U.S. visitors making up more than 30 percent of the museum&#8217;s business, Meiler said he would like to see more American airplanes in the collection.

Not that the German aircraft are not worthy of attention.

The exhibit includes several variations of Messerschmitt fighters and the Heinkel bombers from the Battle of Britain as well as the deadly Stuka dive bombers that tormented Allied troops at Dunkirk.

Some aircraft attest to Germany&#8217;s ground-breaking aerospace design work during World War II. There is the first Heinkel jet aircraft and the V1 and V2 rockets &#8212; predecessors of modern spacecraft and long-range missiles &#8212; that hammered London during the Blitz. The strategischer (strategic) Bomber, built in 1944, looks remarkably similar to the modern stealth bomber. And Germany even had plans for an aircraft carrier, also included in the display, though it was never built.

The exhibit features a large selection of World War I aircraft, including the Red Baron&#8217;s Fokker triplane and the British Sopwith Camel biplane. American aircraft include a Brewster Buffalo fighter and a Boeing P-26A fighter.

However, the museum is yet to acquire a model of the aircraft most associated with Grafenw&#246;hr &#8212; the American B-17 bomber.

&#8220;They are still finding bombs around the town. An alert was raised last year after an unexploded bomb was uncovered,&#8221; he said.

The attacks killed 26 civilians and more than 100 soldiers, both Germans and their Hungarian allies who were training in Grafenw&#246;hr at the time. The exact number of casualties is unclear because the attack destroyed Grafenw&#246;hr&#8217;s administration building, Meiler said.

An after-action report held by the museum shows 203 B-17s from the U.S. 3rd Air Division flew in the raid.

Meiler said his father&#8217;s house was destroyed in the attack.

&#8220;My father had a job as an observer on one of the hills. He saw his house hit by a bomb and then he had to lie down because the shock wave came through. He went to his house and collected his things and carried them up the hill and he could hear people praying,&#8221; Meiler said, adding that most locals took shelter in caves outside of town before the attack.

Aerial photographs in the museum show Grafenw&#246;hr&#8217;s main post pockmarked with craters from the bombing.

Along with the administration building, the attack destroyed a maintenance workshop, several storage buildings and much of the German officers&#8217; camp as well as some barracks. The base horse stables, which stood in the area where the new post exchange is under construction, also were destroyed.

Fortunately for history buffs, many of the most distinctive buildings at Grafenw&#246;hr, including its iconic house-shaped water tower, the circa-1910 Tower Inn Hotel, the headquarters building and numerous offices survive to this day.

The attack left central Grafenw&#246;hr town virtually unscathed but obliterated most of the buildings close to the post. Today, the neighborhoods near gates 1 and 3 are composed mostly of newer buildings.

Anyone who wants to donate a model aircraft to the museum should contact Meiler at: museum@grafenwoehr.de.