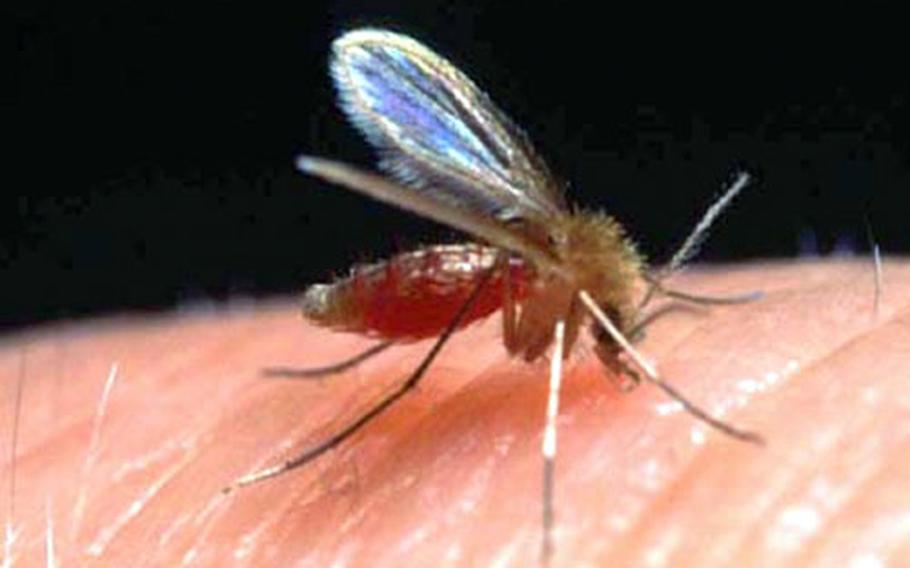 In this magnified photo, a sand fly delivers what could be a parasite-carrying bite that causes leishmaniasis, a disabling and sometimes deadly tropical illness. (Dr. Ed Rowtan / WRAIR)

Preventative medicine officials are deployed to those countries to brief troops about protections, hand out insecticides containing DEET and make sure troops have mosquito netting for their cots. They also hold pre- and postdeployment briefings.

And entomologists this year are spraying the ground of military bases and camps to kill the sand flies, said Dr. (Lt. Col.) Glenn Wortmann, program director of the infections disease fellowship at Walter Reed Army Medical Center in Washington.

&#8220;With the initial [Iraq] invasion, that was not a top priority,&#8221; Wortmann said. &#8220;Not getting shot was a top priority. What&#8217;s new is now [health prevention specialists] are there making sure everyone has DEET, everyone has mosquito netting, and the entomologists are spraying insecticides.&#8221;

The disease, spread by the bite of a sand fly, has infected more than 600 troops since early 2003. Most broke out with minor skin lesions.

In Southwest and Central Asia, sand flies are active from March through October, peaking in September in some regions.

The disease is caused by parasites transmitted via sand fly saliva, and comes in three forms: cutaneous, affecting the skin; mucosal, affecting the mouth, nose and throat and which can disfigure; and visceral, affecting internal organs and can be fatal if untreated.

The incubation period is about three to six months, meaning symptoms don&#8217;t show themselves soon after being bit.

Three troops, two out of Afghanistan and one out of Iraq, have been treated for visceral leishmaniasis, Wortmann said.

The three experienced &#8220;persistent fevers for weeks on end&#8221; and were diagnosed after getting medial treatment at U.S. military hospitals in the States.

There&#8217;s only one way to prevent leishmaniasis: Keep sand flies from biting. Here are some tips:

&#182; Try to limit outdoor activity at dusk and during the evening, when sand flies are most active.

&#182; Apply insect repellent with N, N-diethylmetatoluamide (DEET) to exposed skin and under the edges of clothing, such as under the ends of sleeves and pant legs. Reapply according to directions.

&#182; Keep uniforms properly treated with permethrin. Make sure to apply after every five washings.

&#182; Use permethrin-treated bed netting and screens on doors and windows. Fine-mesh netting (at least 18 holes to the linear inch) is required for an effective barrier against sand flies, which are about one-third the size of mosquitoes.

&#182; In the field, try to get your sleeping bag off the ground. If you can&#8217;t do that, at least use a ground pad. If sleeping under cover, sweep all loose dust and dirt from floors. The cleaner your quarters, the fewer the flies.

&#182; Do not wear flea collars designed for dogs and cats, even over boots, medical experts warn. The collars are designed to repel common house fleas and there is no evidence they work against sand flies. Meanwhile, the chemicals in the collars have not been tested for safety with humans, and can cause allergic reactions and sores that may become infected.

People who deployed to Southwest and Central Asia who have questions about their general health or leishmaniasis can contact the Pentagon&#8217;s Deployment Health Clinical Center of the Department of Defense, telephone 866-559-1627 or at: www.pdhealth.mil.

For evaluation, treatment, and referral of military health-care beneficiaries with suspected or confirmed cases of leishmaniasis, clinicians should contact the Infectious Disease Service at either Walter Reed Army Medical Center in Washington at (202) 782-1663 or 6740, or Brooke Army Medical Center on San Antonio, Texas, at (210) 916-5554 or 1286.

The Walter Reed Army Institute of Research in Maryland also offers diagnostic support and can be reached at (301) 319-9956.