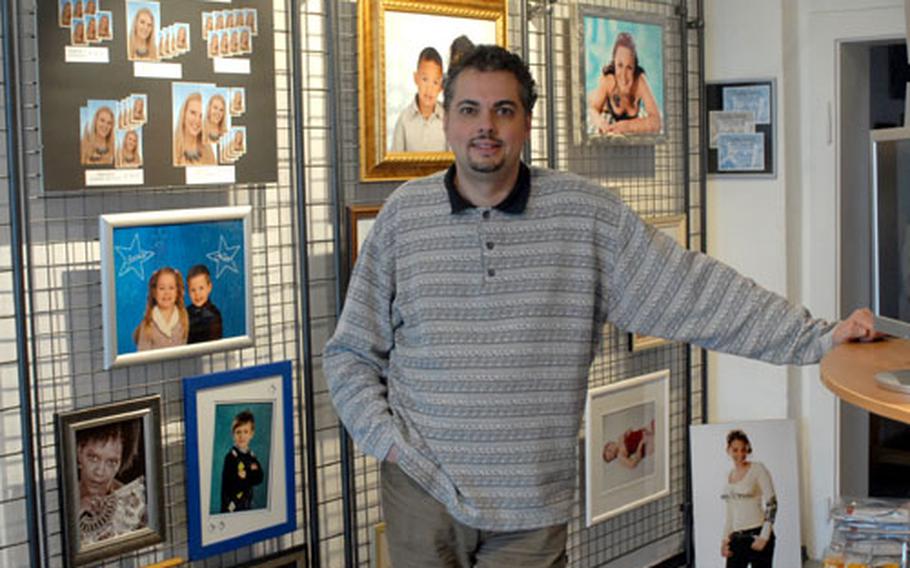 Alexander Kneidl, owner of Fotostudio Spahn, which has been in business outside Grafenwohr’s Gate 1 since 1911, said the 2nd Brigade troops should provide a welcome boost to businesses that have seen lean times in recent years. (Seth Robson / S&S)

GRAFENW&#214;HR, Germany &#8212; The 15,000 Defense Department personnel and family members in U.S. Army Garrison Grafenw&#246;hr had about a $45 million impact on the local economy last year, according to an Installation Management Command- Europe fact sheet.

So, what will 7,500 more soldiers and family members mean for off-post businesses in the area?

&#8220;As soon as the people come, it is good for the economy, no matter what the exchange rate is,&#8221; said Angstmann, adding that the weak dollar has been a drain on local businesses that cater to Americans.

&#8220;Last summer was difficult with the exchange rate. We only do U.S. business. We get paid in dollars, and when you covert the dollar to euros, it is not such a big income,&#8221; he said.

The exchange rate isn&#8217;t a concern on-base, however, and facilities there are also likely to gain from the troops&#8217; move. In September, a $38 million Post Exchange/ Commissary opened, vastly increasing the floor space and products at each store.

Off-base businesses, Angstmann said, also worry that the influx of people could cause inflation in an area that is reasonably priced compared with other parts of Germany and even nearby cities.

But most locals will welcome the Americans and their money, Angstmann said.

The recent deployment of the 2nd Stryker Cavalry Regiment to Iraq is a prime example.

&#8220;In recent years, it has been bad. Soldiers are in Iraq, and the families go home to the States,&#8221; said Alexander Kneidl, owner of Fotostudio Spahn. The business, which specializes in portraits of soldiers in uniform, family photographs and special event pictures, set up shop outside of Grafenw&#246;hr&#8217;s Gate 1 in 1911.

The arrival of the 2nd Brigade troops should provide a welcome boost to businesses, he said.

Alex Hubman, owner of the Am See Hotel in Eschenbach, about a 10-minute drive from Grafenw&#246;hr, said the deployments and the exchange rate have hurt him, too. About 70 percent of his customers are American.

&#8220;We have not had so many people here in recent years because of the Iraq war, and the exchange rate is also bad for me. In the restaurant I haven&#8217;t raised the prices, but people have to pay double now for the steak than [they paid] five years ago,&#8221; Hubman said.

The construction of hundreds of new off-post homes at the Netzaberg housing area &#8212; bordering the training area and the town of Eschenbach &#8212; will help, he said. Hubman, who has owned the hotel for 10 years, hopes some of the 2nd Brigade soldiers and their families will stay at his hotel when they arrive. At least, he said, he expects business from workers supporting the move, such as transport personnel and moving company workers.

Hubman, however, looks at the Dagger Brigade&#8217;s move with cautious optimism.