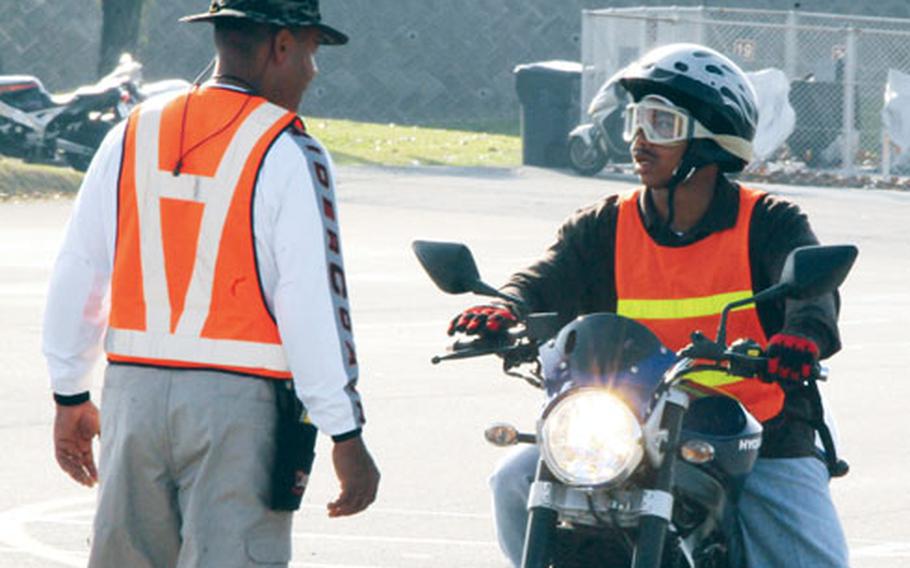 Paul Green, left, an instructor for the basic riders course, talks with a student on the course Wednesday at Kadena Air Base. The course is sponsored by the Marine Corps Bases Camp Butler Motorcycle Safety Office for all SOFA personnel. (Cindy Fisher/S&S)

KADENA AIR BASE, Okinawa &#8212; Fatalities among motorcycle riders in the U.S. military increased in 2008 &#8212; and for at least one service, they exceeded the number of combat deaths in Iraq.

More than 120 servicemembers were killed in motorcycle crashes in fiscal year 2008, up from 97 the year before, according to Defense Department Web sites. It&#8217;s a trend that has prompted safety officials to enhance the motorcycle safety program on Okinawa.

Twenty-five Marines died in motorcycle crashes worldwide in 2008, five more than the number of Marines killed in combat in Iraq over the same period. For the Corps, the number represented the most motorcycle-related deaths during any single year in the past decade.

The military&#8217;s new focus on motorcycle safety led to the delivery of 12 Hyosung Comet GT250 motorcycles to the Marine Corps motorcycle safety office on Kadena Air Base in January, said Pat Yamashiro, a rider coach with the office.

The motorcycles were put into use for the first time at a three-day basic rider course on Kadena that concluded Wednesday.

Riders who fall under the U.S.-Japan Status of Forces Agreement are required to attend a safety course before they can be issued a motorcycle license.

With the GT250s, people don&#8217;t have to wait until they buy their own bike before getting training and experience as a rider, Yamashiro said.

First-time rider Cpl. Christopher Strelczyk, who is in the process of buying his first motorcylce, said he appreciated using the new bikes during his beginner training.