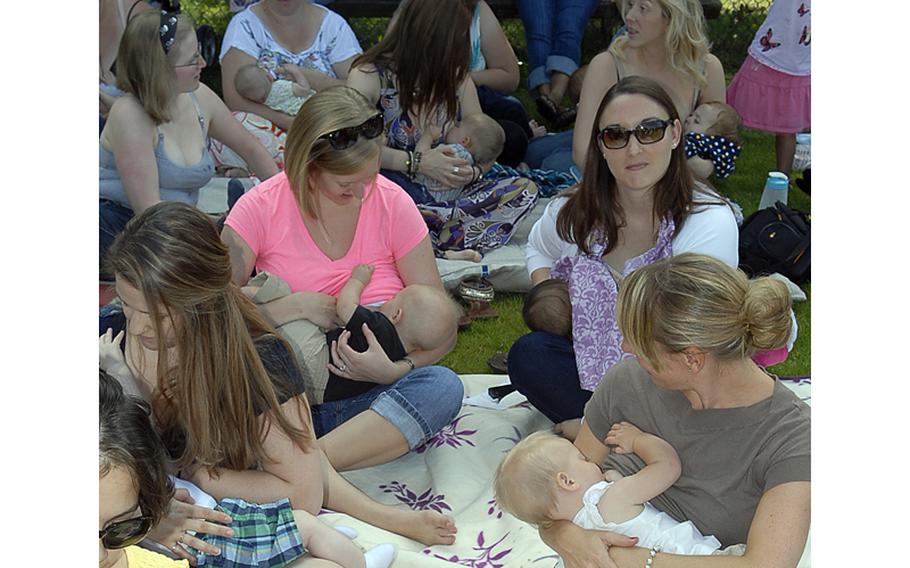 Dozens of mothers nursed their children at Donnelly Park on Ramstein Air Base in August of 2012 as part of the Big Latch On, a global effort to raise awareness of the health benefits of breastfeeding held during World Breastfeeding Week. The 3rd Army headquarters at Shaw Air Force Base, S.C., is one of the rare U.S. military installations where a lactation room has been exclusively set aside for mothers. (Stars and Stripes file)

RAMSTEIN AIR BASE, Germany - Mothers in the Kaiserslautern Military Community - active duty, spouses and others - came together Saturday for a public breastfeeding event to raise awareness about the health benefits for both babies and mothers.

Saturday's event at Ramstein Air Base was part of a community breastfeeding fair put on by Mom2Mom of the Kaiserslautern Military Community.

The highlight of Saturday's event was the Big Latch On. Sitting on blankets spread out on a ball field at Donnelly Park, about 50 mothers nursed their babies and toddlers for at least one minute starting at 10:30 a.m. It was part of a global effort to set a record during World Breastfeeding Week, Aug. 1-7, organizers said.

The event comes two months after photos of two Washington Air National Guard mothers nursing their babies while in uniform were circulated on the Internet, creating a media stir.

The photos were intended for a campaign ahead of breastfeeding awareness month in August sponsored by a Mom2Mom breastfeeding support group at Fairchild Air Force Base.

Military officials said at the time that it was a violation of regulations to use the uniform to promote a civilian cause.

Amy Smolinski, marketing and community outreach director for Mom2Mom of KMC, said Mom2Mom groups on base installations are private organizations and not affiliated with one another.

"It didn't have anything to do with us or the intent or purpose of this event," Smolinski said.

Some active-duty mothers in attendance said the photos caused much discussion and debate in their work places.

"It showed you could serve your country and still be a mom," she said. "I didn't think there was anything intended to be wrong about it."

Others said they had nursed in uniform in public and not had any negative feedback.

Maj. Barbara Ziska, 33, said she's nursed 9-month-old Zane in the base exchange while in her flight suit.

"Nobody has ever said anything to me," she said.

Mom2Mom of the KMC works to help mothers reach their individual breastfeeding goals, Smolinski said. The group has a special support group for active-duty and working mothers.

Senior Airman Dayna Green credits Mom2Mom in Combat Boots for helping her successfully continue to breastfeed 7-month-old Caleb after she returned to work.

She was able to quickly resolve a situation involving negative comments from a co-worker about her milk supply with advice from peers in Mom2Mom in Combat Boots, she said.

Most mothers on Saturday said there seems to be more support for breastfeeding in overseas military communities than in the States.

Army 2nd Lt. Natalie Williams, a registered nurse in the mother-baby department at Landstuhl Regional Medical Center, said a majority of new mothers start out trying to nurse their infants. "We educate them on breastfeeding," she said. "But we don't try to force it on them."

Air Force spouse Tasha Hicks, 27, who's nursed all four of her children and plans to nurse the baby she's expecting, said she has always felt comfortable nursing in public.

"Here, I see a lot of moms with their nursing wraps, with a blanket," she said. "You can be in the park. People are like &lsquo;good job, keep nursing your baby.' "