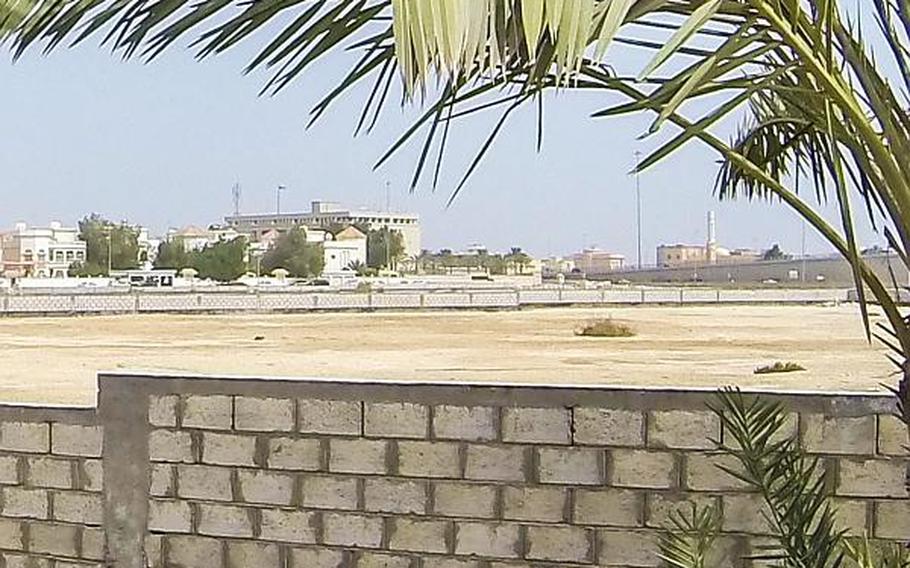 The U.S. Embassy compound in Bahrain, pictured in the background, August 5, 2013 . The embassy is among diplomatic posts ordered closed through Friday amid concerns of a potential terrorism strike. Bahrain Interior Ministry police were on guard around the embassy. (Hendrick Simoes/Stars and Stripes)

At military and diplomatic facilities in Bahrain, where the U.S. Embassy remained closed on Monday amid concerns of a potential al-Qaida strike someplace in the greater Middle East or northern Africa, there were no special signs of alarm.

Indeed, it almost appeared normal at the U.S. Embassy in Manama, a fortified compound with a series of checkpoints and patrolling armed guards. Same at the U.S. Navy’s nearby base, home to the heavily guarded headquarters of U.S. Fifth Fleet, where security is always high. Such states of heightened alert are the norm.

While the closure of more than 20 U.S. embassies over the weekend has grabbed headlines and generated ominous warnings from politicians and pundits alike, who have cautioned that al-Qaida is planning a “major” attack, little appears to have changed at U.S. military installations where troops overseas seem to be taking it all in stride.

In the forward deployed world in which diplomats and troops live, vigilance and heavy security have become the norm. Long gone are the pre-Sept. 11 days of open access garrsions in places like Germany.

Still, while vague talk of terrorism doesn’t tend to instill fear, there is an awareness that, even in peaceful Europe, Americans can become targets. For example, when a radicalized Kosovo man shot and killed two U.S. airmen and wounded two others during a 2011 attack at the Frankfurt Airport.

Sgt. Brandon Aune, a U.S. soldier based in Wiesbaden, Germany, said commanders often attempt to instill a sense of caution when it comes to personal security.

But the latest announcement of a potential threat hasn’t caused any panic, he said.

“This doesn’t cause huge wrinkles in our lives because we’re told to be alert before every weekend at safety briefings. Follow the protocols that have been put out, and it will be OK.”

“The threat has been there for years ... it’s a regular part of our life,” added fellow Wiesbaden soldier Sgt. Andrew Detwiler.

Nearly 20 diplomatic facilities in the Middle East and Africa will be closed through Saturday in connection with a travel alert that warned of the possibility that al-Qaida or related groups in the Arabian Peninsula could launch an attack in those regions. More than 20 embassies were closed over the weekend, though some reopened for business on Monday, including the U.S. diplomatic compound in Kabul.

According to the State Department, intelligence information suggests that al-Qaida and affiliated organizations “may focus efforts to conduct attacks in the period between now and the end of August.”

On Sunday morning talk shows in the U.S., lawmakers from both sides of the political aisle elaborated on the potential threat.

“The threat was specific as to how enormous it was going to be and also that certain dates were given,” said Rep. Peter King, R-N.Y., on ABC’s “This Week.”

The threat did not include locations for possible attacks, according to King, who heads the House Homeland Security Subcommittee on Counterterrorism and Intelligence.

As a result, the State Department issued one of its largest embassy closures in history, stretching from Tripoli, Libya, to Baghdad, Iraq.

“It’s a reflection of the level of concern of American authorities in regards to a threat,” said Raffaello Pantucci, an analyst with the Royal United Services Institute, a London-based think tank. “It’s the specificity and level of concern about the threat. It’s been a growing concern.”

Still, embassies have long been targets, for everyone from anarchists to Islamic militants, Pantucci said. For example, a suicide bomber with ties to a radical left-wing group in Turkey killed a security guard at the U.S. Embassy in Ankara on Feb. 1.

“Embassies have always been a target for groups of all ideological stripes,” Pantucci said. “I think this is something that goes beyond the al- Qaida threat.”

On Saturday, the France-based Interpol issued a warning in connection with the latest threat, noting that a series of prison escapes across nine countries in the past month, including in Iraq, Libya and Pakistan, was cause for added vigilance.

Another cause for concern: August is the anniversary of numerous violent terrorist incidents, including the deadly 1998 bombings of U.S. embassies in Nairobi, Kenya, and Dar es Salaam, Tanzania, which killed more than 200 people and injured 4,000 others.

“With suspected Al Qaeda involvement in several of the breakouts which led to the escape of hundreds of terrorists and other criminals, the INTERPOL alert requests the Organization’s 190 member countries’ assistance in order to determine whether any of these recent events are coordinated or linked,” an Interpol news release stated.

In Europe, military officials said the latest threats have not stymied U.S. military operations in the region.

“We take security of our service members seriously and are always reviewing the security threat and adjusting our security measures accordingly,” said European Command spokesman Maj. Ryan Donald, in a statement. “There has been no impact on the overall mission in Europe or on any exercises.”

U.S. Africa Command, which oversees a base in the east African nation of Djibouti, declined to say whether its mission was affected by the threat alert.

“As a matter of longstanding policy, we would not discuss potential planning or specific measures,” said AFRICOM spokesman Benjamin Benson.

Reporters Hendrick Simoes and Mark Patton contributed to this report.