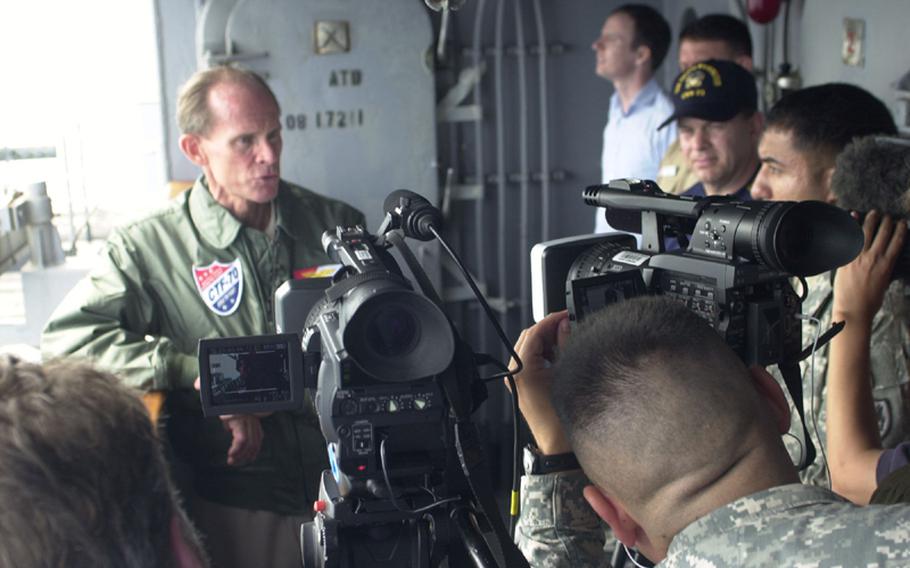 Adm. Dan Cloyd, commander of Task Force 70 and the man in charge of the U.S. part of the Invincible Spirit exercise now underway off the east coast of South Korea, is interviewed Sunday by some of the 11 journalists on board the USS George Washington. (Jon Rabiroff/Stars and Stripes) Capt. Ross Myers, commander of USS George Washington Carrier Air Wing 5, clutches pieces of paper with 'talking points' as he is interviewed by the media Sunday during the Invincible Spirit military exercise. (Jon Rabiroff/Stars and Stripes)

ABOARD THE USS GEORGE WASHINGTON &mdash; Capt. Ross Myers prepared for what might well be one of his most important challenges during the four-day Invincible Spirit military exercise in the Sea of Japan.

The commanding officer of Carrier Air Wing 5 held tightly to two pieces of paper at his waist &ndash; one clearly labeled &ldquo;talking points&rdquo; for the exercise &ndash; as he prepared to be interviewed by close to a dozen journalists shortly after the massive joint U.S.-South Korea drill got under way Sunday.

Myers explained that the two countries routinely hold joint training exercises, but because this one was staged in response to the sinking of the South Korean warship Cheonan, &ldquo;This one&rsquo;s just more publicly held.&rdquo;

For all the talk in recent weeks about how the U.S. and South Korea were planning to &ldquo;send a message&rdquo; of strength and deterrence to North Korea, officials said the primary vehicle for delivering that message would be the media.

After all, it was a safe bet North Korean military officials were not going to be invited to observe the exercise from the flight deck of the George Washington.

Cmdr. Pete Walczak, combat officer for the George Washington&rsquo;s Combat Direction Center, said the communist nation&rsquo;s &ldquo;biggest (intelligence) source&rdquo; was the media on board the ship.

So, much like the preparation that went into coordinating how the two countries would conduct the various military exercises, so too were plans made on how the message that went out through the media would be packaged.

To be sure, several of the same themes were echoed by sources throughout the day.

They said the exercise was scheduled in response to the March 26 sinking of the Cheonan, which left 46 South Korean crewmen dead. However, they said, the U.S. and South Korea hold joint drills all the time.

Officials insisted China&rsquo;s opposition to holding the exercise in the Yellow Sea, near its eastern waters, was not why the drill was being staged in the Sea of Japan on the east side of the Korean peninsula.

And, while saying they did not think North Korea would make good on its threats to respond to the exercise with violence, they were prepared for any possibilities.

Eleven journalists from at least four different countries were invited to stay on the George Washington for three of the four days of the exercise. In addition, another 14 were scheduled to visit the ship for several hours Monday.

Capt. David A. Lausman, the aircraft carrier&rsquo;s commander, put it simply in explaining how important the media is to the Invincible Spirit exercise.

&ldquo;I can&rsquo;t allow the world to come out here,&rdquo; he quipped.