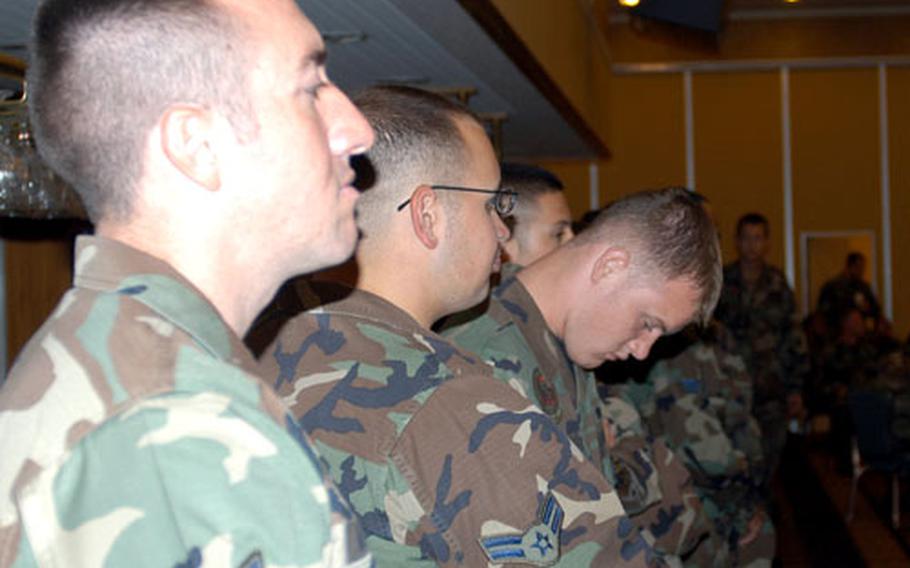 About 300 airmen attended a mandatory reintegration briefing last week at Misawa Air Base, Japan, where they learned tips on readjusting to life back at their home station. The airmen had recently returned from an Air and Space Expeditionary Force deployment; most spent about four months at Balad Air Base, Iraq. (Jennifer H. Svan / S&S)

About 300 airmen attended a mandatory reintegration briefing last week at Misawa Air Base, Japan, where they learned tips on readjusting to life back at their home station. The airmen had recently returned from an Air and Space Expeditionary Force deployment; most spent about four months at Balad Air Base, Iraq. (Jennifer H. Svan / S&S) 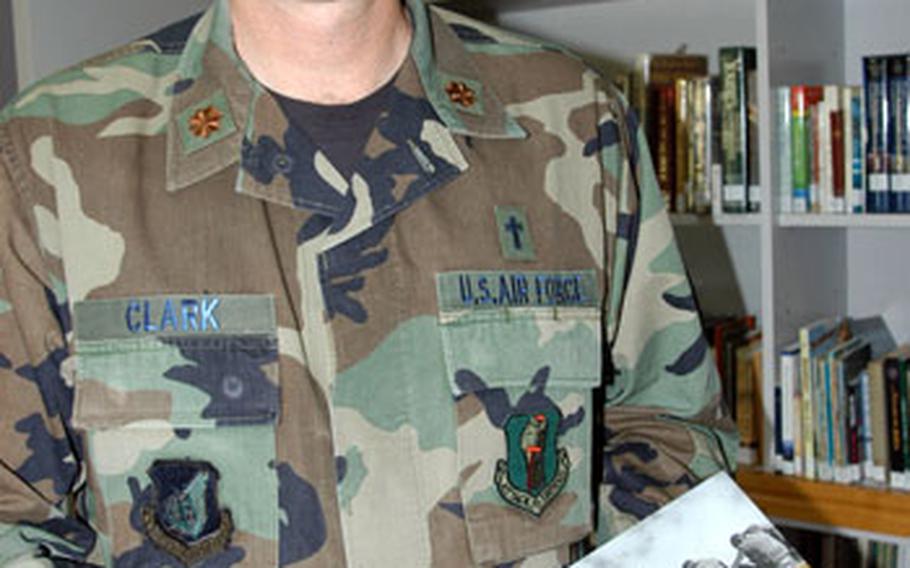 Chaplain Maj. Darrell Clark of Misawa Air Base, Japan, holds out some of the literature Misawa&#39;s base chapel provides to families and servicemembers to help them deal with deployments. At overseas military bases in the Pacific, base chapels work with other agencies to fill in the gap of services that might otherwise be available to servicemembers in civilian communities stateside. (Jennifer H. Svan / S&S) 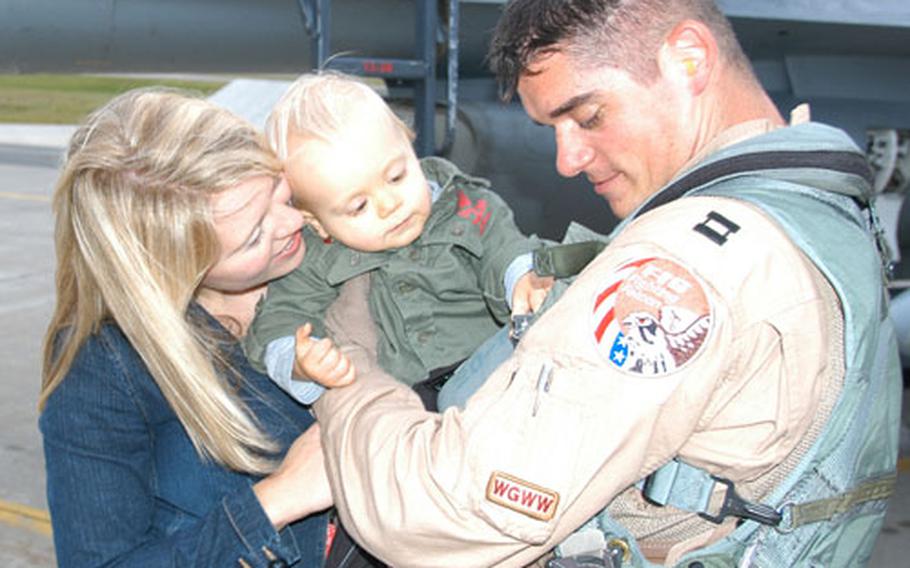 Capt. Chris Morton of the 13th Fighter Squadron at Misawa Air Base, Japan, reunites with his wife, Amanda, and 14-month-old son, Calvin, after returning to Misawa from a four-month deployment to Iraq. Of the couple&#39;s first separation due to a deployment, Amanda said, "Being a single mother was the biggest challenge of my life." (Jennifer H. Svan / S&S)

When Capt. Angela Batts shipped off to an air base in Qatar this summer, it marked the first time in nine years she was apart from her husband, Clif, due to a deployment.

The four-month separation probably was harder on Clif, who looked after the couple&#8217;s three boys, both agreed.

Although Angela, the sexual assault response coordinator at Misawa Air Base in northern Japan, wasn&#8217;t in Iraq, Clif still worried.

Once, Angela traveled to another country in theater and she couldn&#8217;t tell Clif where she was going.

Without her, he missed the small things, he said.

Whether one&#8217;s job is on a ship, behind a desk or in a cockpit, no one in today&#8217;s U.S. military is immune from deploying to war as airmen and sailors are being tasked to provide troops to ease the strain on Army and Marine Corps ground units.

No one gets a free pass &#8212; including the spouses left behind to hold the home together. Marriages are being tested, often strained. Sometimes they break.

The military, recognizing that extended deployments can stress marriages, is stepping up efforts to help couples avoid going to war with each other.

In 2005, it appeared that longer, more frequent and dangerous deployments were creating a casualty far from the battlefield: military marriages.

Alarms were sounded when the Army reported the divorce rate among personnel nearly doubled between 2001 and 2004. Most troubling was the rate among married officers: In 2002, it was 1.9 percent; it soared to 6 percent by 2004.

The Pentagon asked the Rand Corp. to research whether stress caused by deployments to Iraq and Afghanistan was leading to a surge in divorce.

The results of Rand&#8217;s yearlong study, released last spring, showed that the divorce rate in the military &#8212; about 3 percent &#8212; was no higher than it was during peacetime a decade ago.

Divorce rates in the Army, Air Force and Marines rose steadily from fiscal 2001 to fiscal 2005. But it was a rise that returned the rates to those observed in 1996, when demands on the military were measurably lower, according to the study&#8217;s authors.

In the Navy, divorce increased sharply the first years after fiscal 2001, but have declined in the past two.

The study linked longer deployments and divorce only to Air Force members. It found that among married airmen, the more days they were deployed, the greater the risk their marriage would end after they returned.

Relationship expert John Van Epp, author of &#8220;How To Avoid Marrying a Jerk,&#8221; said the outcome of the Rand study surprised him &#8220;in light of what I was hearing other people and other couples say ... and my own common sense. It didn&#8217;t seem to tap into the reality of how deployments, especially multiple deployments, affect couples.&#8221;

The Rand study authors offered several explanations for why the data didn&#8217;t jibe with popular belief.

For one, they examined the direct effects of deployment only for couples who married after fiscal 2002.

&#8220;All of these couples knew that the deployments in Afghanistan and Iraq were under way, and they may have expected and prepared for them,&#8221; they noted in the study.

Deployments don&#8217;t tend to break up happy marriages, relationship experts agree, but they can be the tipping point for one with problems.

The military has a vested interested in patching those fissures.

Military officials say the service components are creating more programs to help ease the stress of deployments. Some are reaching Pacific bases.

At Yokosuka Naval Base, Japan, the Fleet and Family Support Center recently launched an Individual Augmentation Retreat Program to help servicemembers returning from combat zones and their families adjust to life at home. Presenters at a recent retreat touched on topics from post-traumatic stress disorder to couples communication, according to Paul Finch, a counseling and advocacy adviser at the base.

On Okinawa, resources for Marines include the Counseling and Advocacy Program, the Marine Corps Family Team Building program and the Personal Services Center to help reintegrate families.

At Misawa Air Base, 300 airmen who recently returned from a four-month deployment downrange were required to attend a redeployment briefing sponsored by the Airman and Family Readiness Center. They were told to limit alcohol use, communicate with their spouses and take them out on a date.

The Army points to its Strong Bonds marriage education program. For soldiers being deployed or redeployed, the program teaches them special coping tactics, said Maj. Anne Edgecomb, an Army spokeswoman at the Pentagon.

But is it enough?

&#8220;Our system, across the board, is being overrun by the return of veterans from Iraq and Afghanistan,&#8221; he said.

Part of the problem is money, Raezer said, with many bases only funded at a level to do treatment.

Van Epp, who&#8217;s headed to Europe soon to train 55 instructors from 11 military installations, is impressed by the effort the military has shown so far.

But he, too, believes more needs to be done.

Deployments can make you stronger

All this and a foreign country, too?

Love and a leap of faith

Unaccompanied tour is both blessing and curse