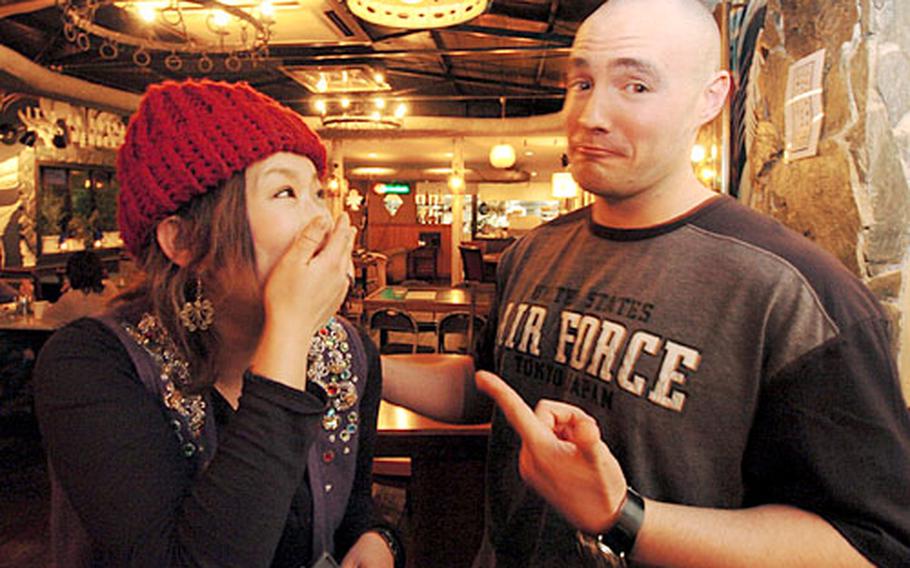 Airman 1st Class Brian Anderson makes waitress Youko Takeshita laugh in his off time from working at Yokota Air Base, Japan. Anderson, a comedian for more than two years, has a show at the Maple Leaf in Shibuya on March 26. (Christopher B. Stoltz / S&S)

Joining the Air Force was a pretty good idea for Brian Anderson.

If you&#8217;re going to be a stand-up comedian, the military offers plenty of material.

One of Anderson&#8217;s jokes describes guidance he once received about doing a task the same way one would, um, have intimate relations with a mule.

Anderson draws from his experiences to craft his routine, embellishing where necessary. The mule conversation actually happened, he said.

He still has no idea what the individual meant.

Add to that the oddities of being in a foreign country and he&#8217;s found some good material. A new joke he&#8217;s forming examines the Japanese quest for perfection, such as making arcade games whose metal claws actually do pick up toys or prizes. Which doesn&#8217;t really strike Anderson as cost effective.

Anderson, an airman first class with the 374th Communications Squadron at Yokota Air Base, is an unlikely comic.

Now 25, he started doing standup in Los Angeles while waiting to enter the Air Force during a deferral two years ago. After arriving in Tokyo six months ago, he found a group called the Tokyo Cynics that meets a few times a month and has an open-mike night for newcomers. In the short time since he hooked up with the group, Anderson has been before an audience more times than in his entire pre-service comic career.

In Japan, he&#8217;s come into his own, portraying himself, but using voices to help convey jokes to non-native English speakers.

Languages barriers aside, performing in Japan has brought many rewards. And that there are fewer comedians &#8212; English-speaking ones, anyway &#8212; means more opportunities to get onstage. Here, young comics have more chances to mingle with the established pros.

Anderson never hides his other life when at work and often tries out jokes on friends and co-workers and invites them to his shows.

But he probably won&#8217;t star in his own show at Yokota anytime soon because his stand-up routine is only five minutes long. And the jokes &#8212; especially the military ones &#8212; might not be enjoyed by all, he said.