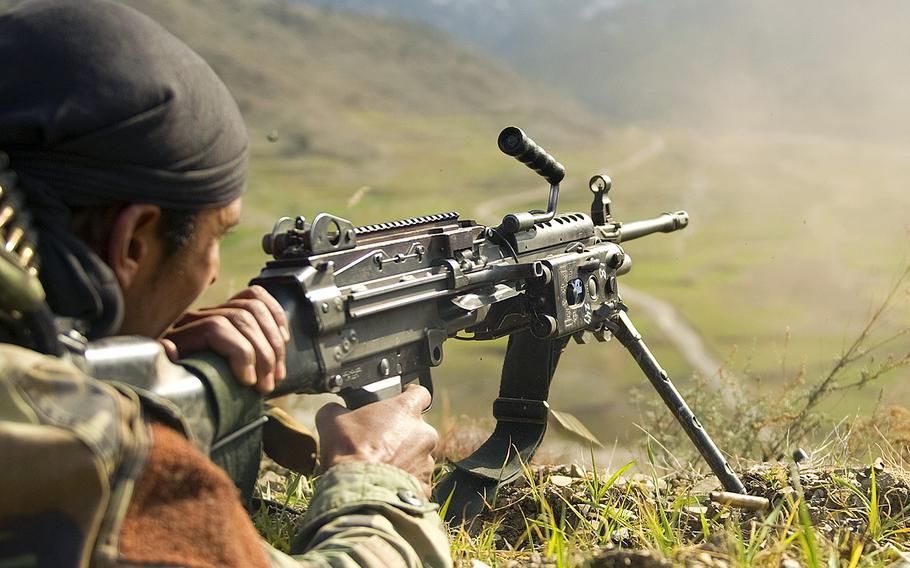 MAZAR-E-SHARIF, Afghanistan — The re-emergence of government-backed local militias in northern Afghanistan outweighs the benefits for the fight against the Taliban because those armed groups could turn into “hired guns” for warlords and bandits once the insurgent threat subsides, coalition military officers say.

Over the past several months, Kabul reportedly began moving weapons and equipment to the militias as fighting intensified in late May. The groups are generally associated with local commanders who battled the Taliban in the 1990s. The paramilitaries include the Afghan Local Police, a U.S.-backed volunteer militia that acts as a village defense force in most of the country’s 34 provinces.

Their role is similar to that played in Iraq by Sunni tribal militias that turned against al-Qaida in Iraq in the 2003-11 war. Now the United States is trying to raise similar forces to join the fight against the Islamic State group, especially in Anbar province.

In Iraq, however, those forces are at least nominally under the control of the U.S.-backed central government in Baghdad. In northern Afghanistan, the fear is that the militias are loyal to local warlords, and control by Afghan government authorities is weak.

Col. Stephen Basener, head of intelligence for the coalition’s northern command, acknowledged that top Afghan commanders in the north have only a cursory idea of what the paramilitaries are doing. “In the long term, those militias could become a big problem for (the government) and coalition forces in Afghanistan,” he said. “It is a dangerous game the (militia backers) are playing.”

Those concerns were heightened when Atta Mohammad Noor, the governor of the northern province of Balkh, and Vice President Abdul Rashid Dostum joined forces in the fight against the Taliban in the north. They were top mujahedeen commanders in the 1980s.

Dostum defended the militias’ role, telling Afghan media a “public uprising” by all Afghans to fight the Taliban is necessary because the government’s military and police cannot secure the north.

“I see the arming of militias as a last resort, when our enemy is taking over the country, people are being killed, and the government collapses and can’t provide security to its people,” Noor said.

American and NATO commanders acknowledge the government-backed militias have played an important role in this year’s fighting season, but they say the long-term threat they pose far outweighs the benefits they bring.

A victory over the Taliban won with their support could be negated by the turmoil they might create by undermining Afghanistan’s security forces, a U.S. intelligence official said. “Once you open this door, you cannot close it without bloodshed,” said the official, who spoke on condition of anonymity.

In the early years of the Afghan War, many of the groups had been armed and trained by U.S. and NATO troops in an attempt to build a local police force, said Col. Paul Sarat, deputy commander of NATO’s training command in northern Afghanistan.

During this year’s fighting season, “there has been at least some level of government support for these groups” in some of the more heavily contested provinces, he said. But the militias’ tendency to pledge allegiance to regional power brokers — instead of the central government in Kabul — has Afghan and coalition leaders concerned, he said.

He said Afghan military leaders are pressing their coalition counterparts to help disarm and disband the groups after this fighting season. “It’s going to be a hard sell. ... You are really playing with fire with these militias” if they decide to turn their back on the country’s leadership, he said.

Kabul’s decision to back the militias was intended to support Afghan security forces trying to tamp down Taliban attacks this year, said Basener.

Several districts in the northern provinces of Kunduz, Badakhshan and Faryab have come under repeated attack over the past several months. The Taliban hasn’t held territory for any period of time, but the attacks exposed serious gaps in security forces’ ability to defend an area seen as one of the most secure in the country.

“In the short term, their assistance (will) be of help,” Basener said of the militias’ role in the north. “There is always too much territory and not enough military to have an effect,” he said.

Wagma Sapai, a female parliament member from Kunar province, warned the re-emergence of militias would increase bloodshed and create more problems in the future. She said militias were responsible for the chaos and violence that gripped much of Afghanistan in the early 1990s, and that gave rise to the Taliban.

“There will be shooting from every single house, every single street, because everyone will be armed,” Sapai said, adding that those who lead the militias will be in a position to exert pressure on the government in the future.

But the Interior Ministry insists the pro-government groups do not present a concern.

“The Afghan government does not support militias,” spokesman Sediq Sediqi said in Kabul. “But there are communities where we have had challenges (and where) the people want to arm themselves to fight the enemy.”

“Since the Afghan security forces are growing and becoming more capable, this is not a headache because they are supporting the government and fighting the enemy,” he added. “But groups that are illegally armed and presenting problems for the community, they will be banned.”

The militias assisted in wresting Badakhshan province’s Yamgan district, about 150 miles from Kabul, from the Taliban in early June. The militias again fought alongside military and police units to retake Char Dara and Dasht-e-Archi in Kunduz later that month.

The paramilitaries have been used mostly for intelligence to help troops target top Taliban members during counterinsurgency operations, Sarat said. The groups have also been critical in assisting security forces to hold territory retaken from the Taliban during fighting this spring, he said.

But once an area is cleared by government forces, militia leaders’ extortion and protection rackets soon take root, he said. “That is (one reason) why you really do not want to get involved with these groups ... and some of the leadership can very easily turn to the highest bidder.”

Zubair Babakarkhail and Stars and Stripes reporter Slobodan Lekic contributed to this report.