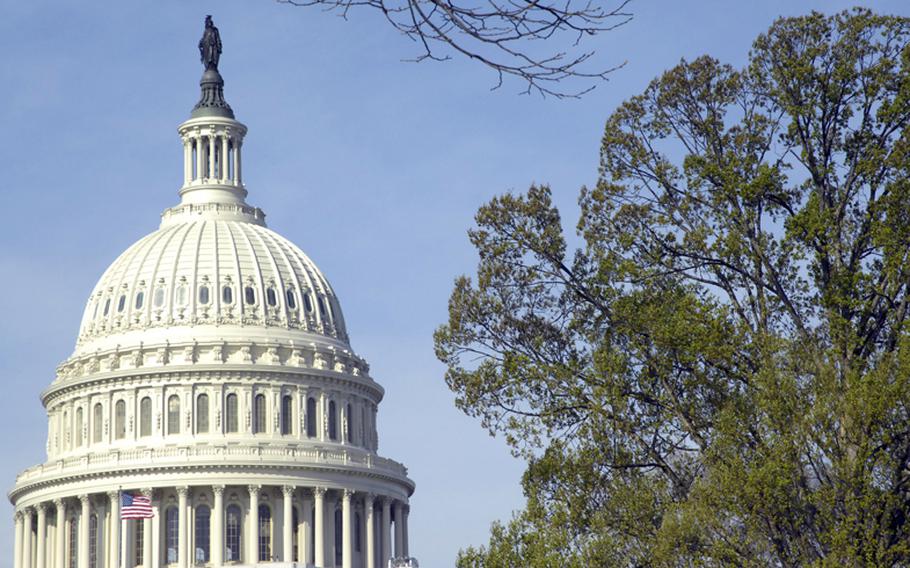 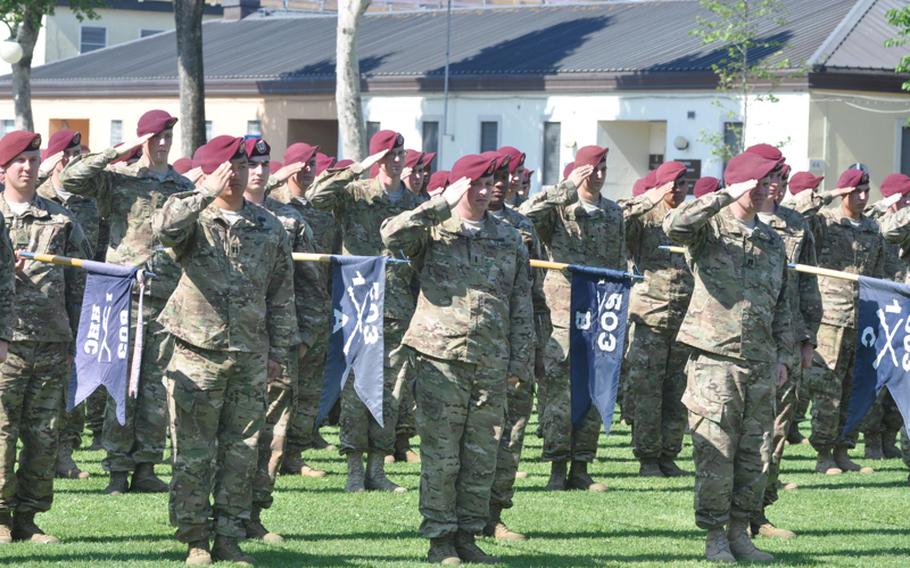 Soldiers from the 1st Battalion, 503rd Infantry Regiment offer salutes Thursday during a ceremony at Caserma Ederle that featured the casing of the colors for the 173rd Airborne Brigade Combat Team. The ''Sky Soldiers'' are getting set to start a nine-month deployment in Afghanistan. (Kent Harris/Stars and Stripes)

“This is not an unsolvable problem. We can do this,” he said, calling fiscal uncertainty one of the greatest threats to America’s national security.

If sequestration goes into effect March 1 and Congress fails to pass a 2013 defense appropriations bill, Panetta said, the military will face “huge cuts, largely that will have to come from readiness and maintenance.”

Without the 2013 budget in place, the Pentagon is forced to keep operating on last year’s budget.

“You guys go out and put your lives on the line,” he said to soldiers from the 173rd Airborne Brigade Combat Team. “All we’re asking of our elected leaders is to take a small part of the risk that maybe they’ll piss off some constituents.”

Panetta’s concerns are shared by top U.S. military leaders, who wrote a joint letter warning Congress in unusually stark terms that its failure to pass a defense budget — coupled with the threat of automatic cuts — has pushed the Pentagon to the brink of a crisis.

According to the Associated Press, which obtained a copy of the letter, the readiness of U.S. armed forces is at a “tipping point.”

“We are on the brink of creating a hollow force,” said the letter, signed by the chiefs of the Army, Navy, Air Force, Marine Corps and National Guard, as well as the chairman and vice chairman of the Joint Chiefs of Staff.

In a statement responding to the letter, Rep. Howard P. “Buck” McKeon, chairman of the House Armed Services Committee, said it should serve as a “wake-up call” to Congress and the White House, the AP reported. “The condition of our armed forces is swiftly declining. And this is the first red flag on what could be a hazardous road for our national security,” he said.

With time, Panetta said on Thursday, the Pentagon can implement cuts to the defense budget in a responsible way.

“But if I face another half a trillion in cuts, all bets are off,” he told the soldiers. “I don’t know what the hell to tell you, at that point. We’re all going to pay a hell of a price.”

In their letter to Congress, the military leaders voiced concern that the lack of a budget could create a disconnect between spending needs and available funds -- leaving the armed forces ill prepared for future combat.

“Should this looming readiness crisis be left unaddressed, we will have to ground aircraft, return ships to port, and stop driving combat vehicles in training,” the letter said, according to the AP.

“To avert this crisis we urge you to take immediate action to provide adequate and stable funding for readiness,” they wrote.

“Under current budgetary uncertainty, we are at grave risk of an imposed mismatch between the size of our nation’s military force and the funding required to maintain its readiness, which will inevitably lead to a hollow force.”