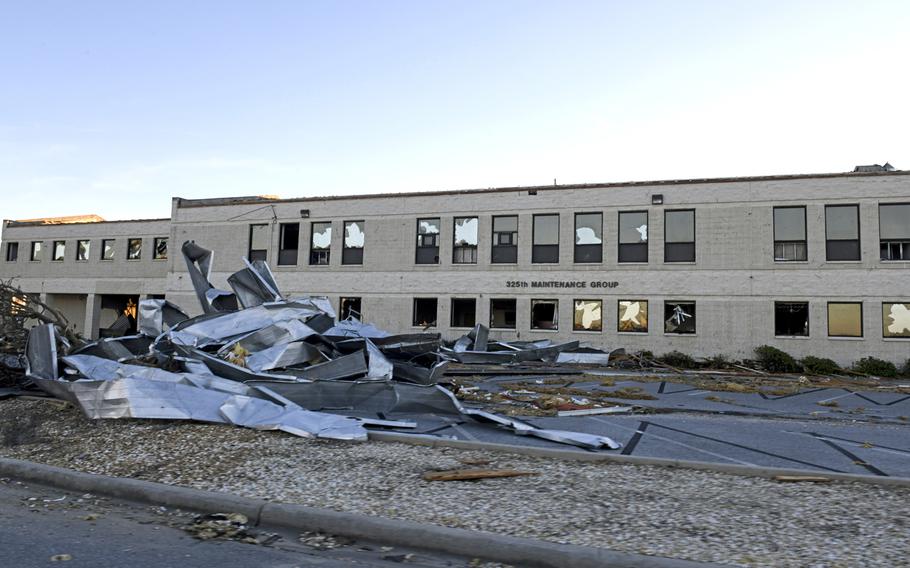 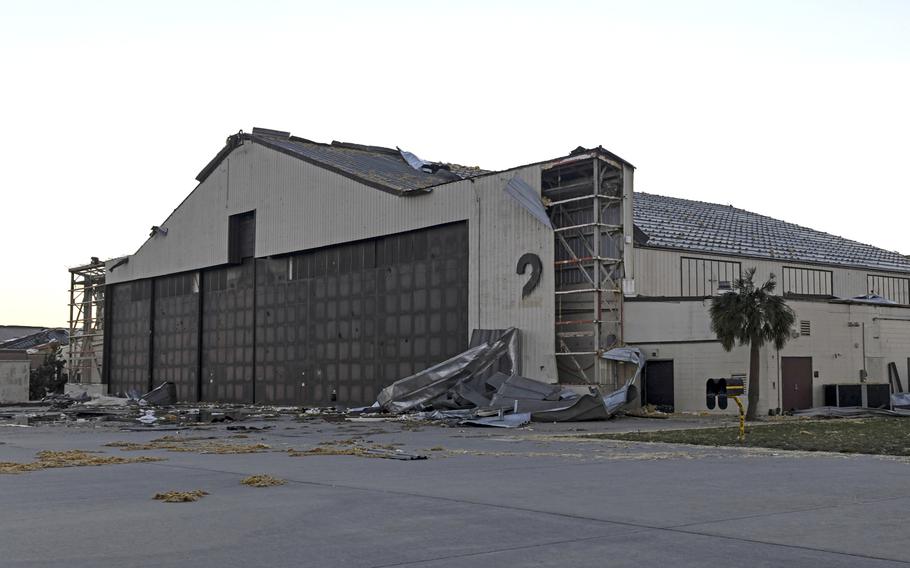 Air Force leaders are optimistic that Florida’s Tyndall Air Force Base can be rebuilt despite the catastrophic hurricane damage it sustained last week.

Secretary of the Air Force Heather Wilson, Air Force Chief of Staff Gen. David L. Goldfein and Chief Master Sgt. of the Air Force Kaleth Wright surveyed the damage at Tyndall on Sunday, visiting with the 93 airmen who rode out the storm on base.

“I feel pretty good about the future of Tyndall,” Wright told reporters. “I know it will be a long, hard road but we have a lot of resilient airmen that are already putting their head down and getting after making it a safe place.”

Asked to address speculation that Tyndall might be a total loss, Wilson said the Air Force was bringing in its expeditionary civil engineers to assess the facilities. While roads were cleared, the base was still without water and power Sunday and was not safe for airmen and their families to return, she said.

The situation could improve in as little as two weeks, Wilson said. After the initial shock wears off, “I think people will really start to see the future and not just focus on the present,” she said.

Tyndall took a direct hit from Hurricane Michael on Wednesday, with winds from the Category 4 storm peaking at about 129 mph on the Panama City base, knocking down trees and power lines and blowing off roofs. Wilson said no injuries were reported on base.

Air Force officials have confirmed that some F-22 Raptor jets in various states of maintenance remained at Tyndall during the storm and sustained damage, though the full extent was still being determined.

Tyndall hosts an estimated 55 Raptors. The New York Times reported that the Air Force sent at least 33 of the jets to Wright-Patterson Air Force Base in Ohio ahead of the storm.

The jets that remained were all intact and looked better than expected given the damage to the hangars, the three leaders said in a joint statement posted on the Air Force Facebook page late Sunday.

“Damage was less than we feared and preliminary indications are promising,” the statement said.

Goldfein said Tyndall’s command team had only 48 hours after Michael was upgraded from a tropical storm to a Category 4 hurricane to get 11,000 people out and evacuate aircraft.

Raptors that did leave are now at Joint Base Langley-Eustis in Virginia, where the Air Force has maintainers to work on them, Goldfein said. The 1st Fighter Wing at Langley hosts about one-third of the Air Force’s Raptor fleet.

Sen. Bill Nelson, a Florida Democrat, also visited Tyndall on Sunday and said older buildings on the base were demolished, while newer structures need substantial repair and some hangars were severely damaged, The Associated Press reported.

Such destruction of an air force base was rivaled only by Hurricane Andrew, whose Category 5 winds battered Homestead Air Force Base south of Miami in 1992.

The base closed and most of its aircraft and personnel were reassigned to other facilities. It reopened two years later as a smaller Air Force Reserve base.

Nelson, who sits on the Senate Armed Services Committee, promised that Tyndall would be rebuilt and said that fears that it will close are “unfounded,” according to AP.

In a letter dated Oct. 12 to Wilson and Goldfein, Nelson, along with Republicans Sen. Marco Rubio and Rep. Neal Dunn, requested the Air Force, as it conducts damage assessments, provide the funding and support needed to repair infrastructure, restore operations, and provide for airmen, civilians and their families.

Some of the support for the roughly 3,000 airmen and families who live on or nearby the base may come more immediately from other military families and spouses pitching in to help.

Kelsie Perez, an Air Force spouse at Osan Air Base in South Korea active in spouse support groups online, told Stars and Stripes that multiple groups are helping out to relieve some of the financial stress caused by the hurricane.

“Spouses are stepping up in such beautiful ways,” Perez said. “I’m in awe. I always hate that it takes a disaster to bring people together. But the fact that people always do come together is a beautiful thing. We could use more of that.”

Perez said she has heard of spouses opening up their homes to airmen in need, as well as offering to collect and deliver donations.

Some of the organizations Perez suggest donating to include the American Red Cross, which has a goal of raising $50,000 towards Hurricane Michael relief efforts, and the Air Force Enlisted Village, an assistance fund charity.

The Enlisted Village aims to deliver about 900 boxes of items to Tyndall families, after a military spouse created gift registries at Target and Amazon.com for military families affected by the storm, according to a post on the group’s Facebook site.

“Even if I didn’t know anyone at Tyndall, there are people and families hurting, physically, mentally and emotionally,” Perez said. “Anything we can do to help them, we should.”

Those interested in assisting the spouses’ relief effort can join a local Air Force spouse Facebook group, or visit Tyndall’s at www.facebook.com/TyndallSC.