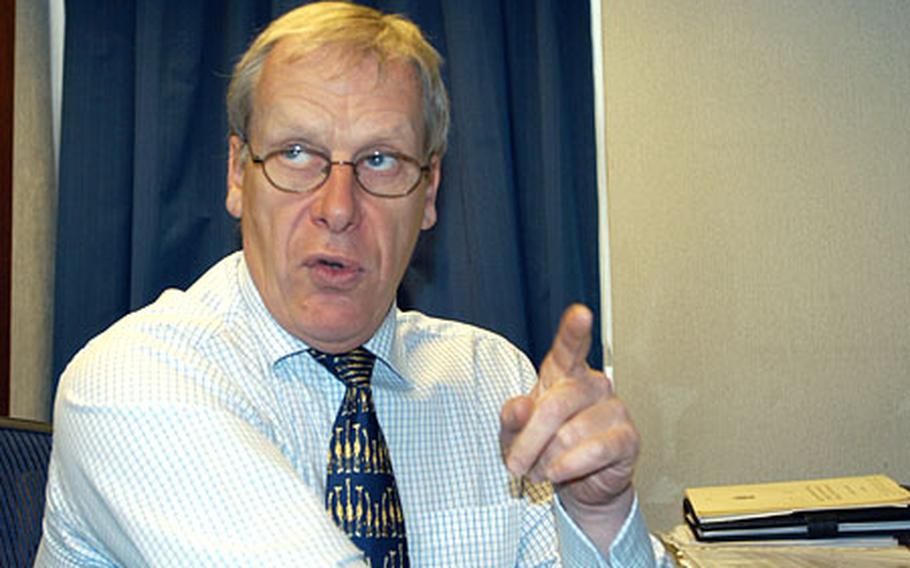 RAF MILDENHALL &#8212; One of the military&#8217;s chief lawyers in England is being awarded one of the Air Force&#8217;s top civilian awards for his work in saving the government more than $1 million.

Motorists driving through the capital&#8217;s congestion zone on weekdays are obligated to pay an 8-pound fee ($16).

James&#8217; move is most crucial to the U.S. Navy, which has two offices in London &#8212; one within and one outside of the recently extended congestion zone.

&#8220;They had racked up more than $1 million in charges and penalties before we worked out this agreement,&#8221; James said. &#8220;Before we arranged our current agreement, I recommended that the government not pay the congestion charge.

James, who also was instrumental in negotiating the Value Added Tax exemption that U.S. servicemembers enjoy in England, drew on the British Army Act of 1955 to circumvent the congestion charge.

&#8220;It wasn&#8217;t so much negotiating a treaty as much as making them accept that our vehicles are exempt from the congestion charge,&#8221; he said. &#8220;According to the [Army] act, any military vehicle shall not be charged for passing over any road or bridge. That certainly sounded like the congestion charge to us.&#8221;

The successful bid also drew on a separate piece of legislation that said &#8220;any benefits received by the home forces can be extended to the visiting forces,&#8221; he said.

But officials from the Transport for London office did not easily acquiesce to James&#8217; assertion.

He was occupied with more than a year&#8217;s worth of correspondence with Transport for London officials before the parties struck an accord.

&#8220;Eventually the light went on. Transport for London agreed we should enjoy a special status,&#8221; he said. &#8220;The role here is to secure the sovereign right of the U.S. forces under the status of forces agreement to make sure the U.S. is able to operate in the U.K.&#8221;

Transport for London, which manages the congestion charge, issued a statement to Stars and Stripes.

&#8220;Vehicles used by U.S. forces &#8212; driving in the congestion charging area during controlled hours whilst on military duty &#8212; are not required to pay the congestion charge,&#8221; the statement reads. &#8220;Non payment does not apply if the vehicle is not being used by a member of the U.S. military for military purposes.&#8221;

James said the Air Force had not racked up as substantial a bill as the Navy due to the low number of trips airmen take into London&#8217;s congestion zone.

He said any military member who has to travel within the congestion zone for work purposes can alert his office and register the vehicle on an exemption list.