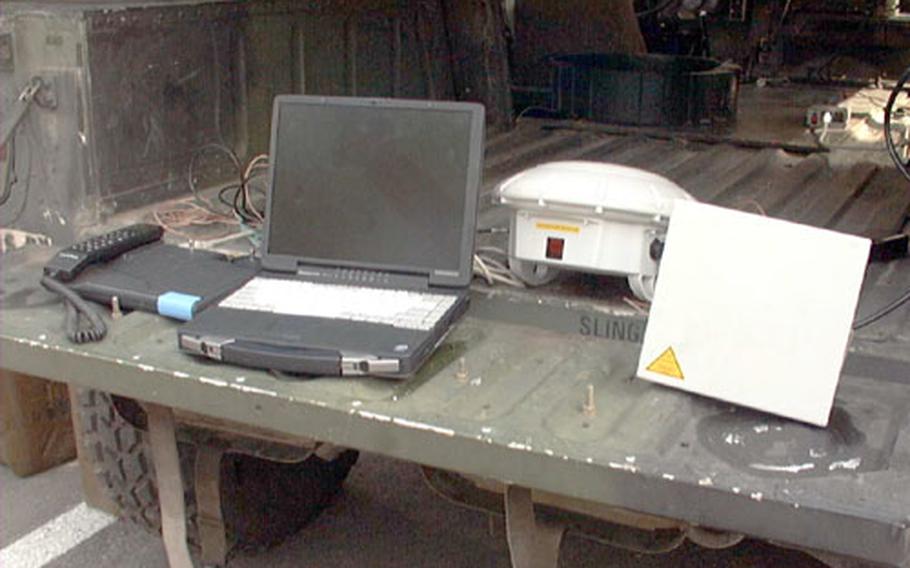 TAEGU, South Korea &#8212; As Army Sgt. Sean Lockwood sees it, there are only two ways to track the whereabouts of military convoys as they move along South Korea&#8217;s roadways.

The easy way is to use some portable high-tech gear that lets military logistics trackers keep tabs on convoys&#8217; progress as they move troops, equipment and supplies to the combat zone &#8212; important information for the brass in wartime.

The hard way is finding a spot along a convoy&#8217;s path and counting each vehicle as it barrels past, jotting notes like a grocer counting produce.

To track a convoy, troops affix r-f tags to the grills of each vehicle, using a small plastic tie. Each tag has a number. Information is typed into a database showing, among other things, what cargo that vehicle is carrying.

Teams with ITV gear are placed along the convoy&#8217;s planned route, typically a highway that in wartime is used as a main supply route, or MSR.

The ITV gear records the time the tag transmitted its number and the interrogator&#8217;s map position. The laptop passes all this information to the satellite phone, which beams it skyward to a satellite.

The satellite beams it back to an earth station, which sends it on over a phone line to the Internet.

Military personnel with the right logon information can access the Web site to see not only when the vehicle passed the interrogator point but what cargo is aboard.

&#8220;Then you can see what commodity you got or what vehicle is associated with that tag number,&#8221; said Rhodes. The whole process &#8220;allows a commander visibility on where their convoy or commodities are on a specific route,&#8221; he said.

Though ITV technology is not new, it was only Monday and Tuesday that the Army in South Korea gave it its first big-scale tactical field deployment during a two-day convoy exercise. Before then, civilian contractors had held some training sessions and soldiers had done some small-scale tests of the gear in the field.

&#8220;This is the first time that we&#8217;ve actually tied it into how we would do it if we were to transition to war,&#8221; said Army Maj. Aimee Klimowicz, chief of the 19th Theater Support Command&#8217;s distribution management center in Taegu.

Being able to track the whereabouts of logistics convoys helps top commanders gauge whether the troops, equipment and supplies needed for battle are moving as they should, Klimowicz said.

He also likes it for another reason.