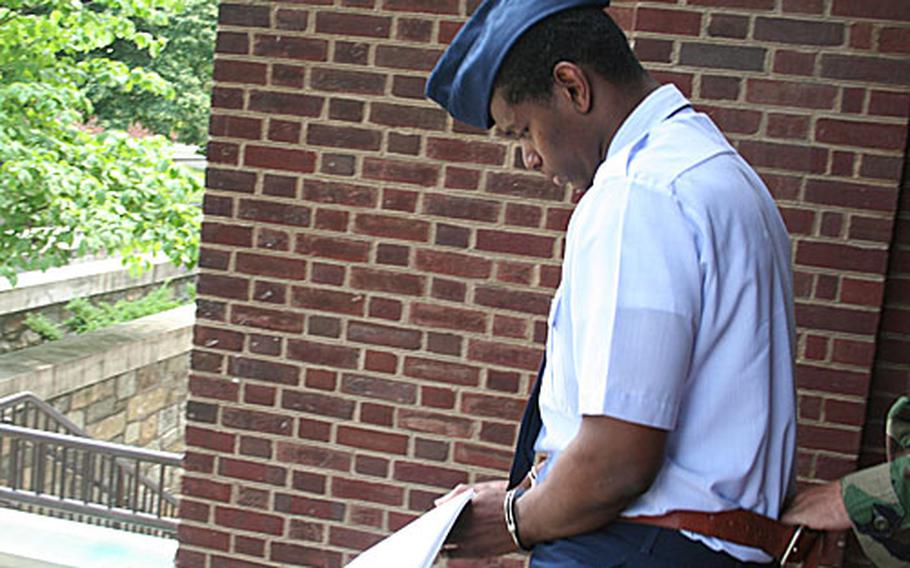 Airman Calvin Hill is removed from the courtroom at Bolling Air Force Base in Washington, D.C., during a pause in his court martial Wednesday. (Lisa Burgess / S&S)

Airman Calvin Hill is removed from the courtroom at Bolling Air Force Base in Washington, D.C., during a pause in his court martial Wednesday. (Lisa Burgess / S&S) The panel came to its decision Wednesday, after listening to the defenders of Hill and his government accusers offer their final arguments in his court-martial Tuesday.

"She had been dragged to a room that was dark, and left to die," said Air Force Maj. Robert Luttrell, who offered the closing argument for the government. "Her last sight was a [barbell] weight, used on her face."

"The accused is guilty of premeditated murder and obstruction of justice," Luttrell had told the jury Tuesday. "Find him guilty, members."

Turner was killed at Naval Air Station Keflavik, Iceland, on Aug. 14, 2005. Hill, 21, of Warren, Ohio, could have faced the death penalty if convicted.

Turner, 20, of Frederick, Md., died just eight days before she was scheduled to testify against Hill for allegedly stealing her ATM card and personal identification number and withdrawing $2,700 from her bank account.

Turner, a member of the 56th Rescue Squadron, was found unconscious and lying in a pool of blood by a fellow airman in a darkened television lounge just off her dormitory's third-floor dayroom, where she had been running on the treadmill.

Her skull had been fractured by a heavy, blunt object, and her spinal cord severed by a single thrust of a knife, prosecutors said.

Hill, who had been friends with Turner but had not dated her, was arrested that night and placed in pretrial confinement. He was the only suspect charged in the murder.

But the government's case "is a rickety boat getting slapped by thousands of pounds of sea water," Air Force Capt. Jason Kellhofer, a member of Hill's defense team, told the jury Tuesday.

"There were a lot of facts in this case that were not provided to you," Kellhofer said. "The government wants to choose and pick."

Instead of trying to solve the case, the government has focused all its energies on proving Hill's guilt, Kellhofer said in closing arguments.

"The prosecution has failed to consider anyone other than Airman Hill from Day 1," Kellhofer said.

The jury trial, which opened April 25, was held at Bolling because Keflavik closed Sept. 30, 2006, making continued access to the crime scene more difficult for investigators on both sides of the case, and scattering the more than 90 witnesses interviewed by investigators and the defense.

Some of the most important witnesses had to be located in Iceland and the United States and forced to testify.

Among those was Hill's girlfriend, Vannee Youbanphot, a Thai woman who resides in Iceland.

She testified that he had left her in his dorm room that evening at about 8:30, watching the movie "Top Gun."

Hill told her that he was going down to the first floor to meet with his supervisor.

He returned "sweaty and stinking" so badly that she told him to take a shower, according to her testimony.

The Hill trial featured more than 100 pieces of evidence that had to be processed in federal laboratories, including a pair of white Nike sneakers Hill wore the night of the crime.

The sneakers were central to the case because investigators found tiny drops of blood on the laces and on the tongue of the shoe, which DNA tests showed were Turner's.

But the defense team also accused the government of sloppy evidence handling. They argued that the blood could have gotten on the shoes after Hill was arrested and military police walked him down the same stairwell that Turner had been carried down on a stretcher.

They also said that Hill's shoe might have been contaminated with blood from sheets collected as evidence from the hospital where Turner was taken after being attacked.