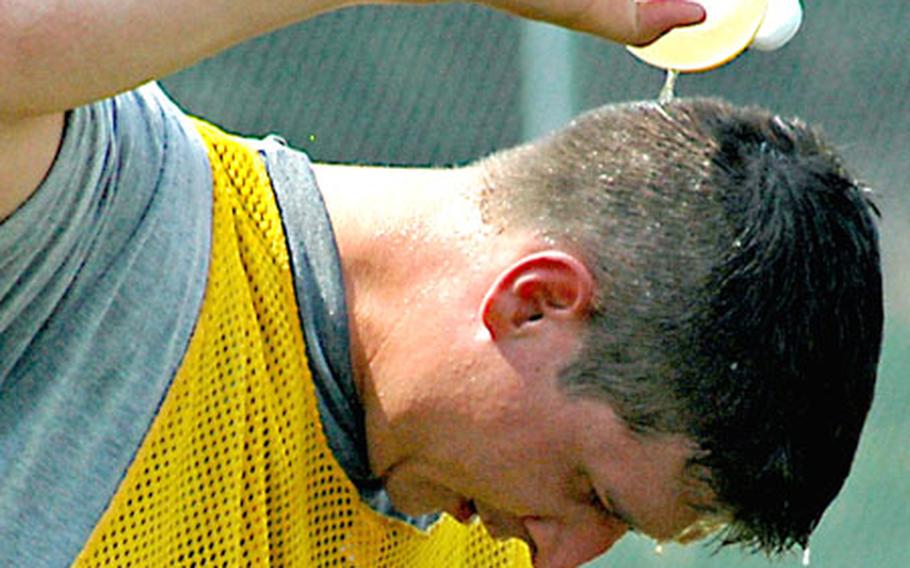 The TV weather maps have been covered with dark red patches as temperatures across Europe soar into the triple-digits.

The U.K. broke the national record on Wednesday for &#8220;hottest day ever&#8221; in July, with a high of more than 97 degrees in Wisley, Surrey. Germany may also break the national high this week, and the Deutsche Welle news service reported this July may be the hottest month in German history.

In response to the hot weather, unit leaders in all branches of the military are issuing directives and taking precautions to avoid heat-related illness and injury. So far, the preventative measures seem to be working.

&#8220;It&#8217;s about using common sense when you&#8217;re outside,&#8221; said Tech. Sgt. Pamela Anderson, a public affairs officer at the Spangdahlem Air base, located in Germany near the Luxembourg border.

As of late Thursday morning, no heat-related medical cases had been reported at the base.

&#8220;We&#8217;ve been more involved in prevention up to this point,&#8221; said Maj. Matt Albright, a medical liaison to Spangdahlem&#8217;s safety office. Albright said the wing sent out guidance Thursday on how to avoid heat illness.

The directive is based on a lengthy Air Force pamphlet that details what kind of work, how much rest, and how much water people should drink at different temperatures to avoid heat illness, a medical condition that occurs when a person &#8220;becomes incapacitated as the result of a rise in core body temperature.&#8221;

The Army and the Navy have similar procedures and regulations for working in hot conditions.

A doctor at the Darmstadt medical clinic in Germany said that the emergency response teams have seen an influx in heat-related cases in the past few weeks and that people, especially the elderly, should make sure to drink plenty of noncaffeinated fluids.

Several minor cases of heat cramps were reported in Caserma Ederle in Vicenza, Italy, but no serious cases so far, said Col. Bradley Harper, commander of the Army Medical Clinic in Vicenza. He said soldiers have been well briefed on the potential danger of the heat. Aviano Air Base reported two minor heat-related incidents in the past two weeks, according to Capt. Jennifer Ferrau, public affairs officer at the 31st Fighter Wing.

There seems to be no immediate end in sight to the heat wave, according to a forecast of the 21st Operational Weather Squadron at Sembach, Germany.

Although unit leaders have issued hot weather warnings, training has continued as usual at the U.S. Army&#8217;s 1st Armored Division, said public affairs officer Maj. Wayne Marotto. Soldiers may have to adjust their work/rest cycles, and should take care to drink plenty of liquids, Marotto said.

He emphasized that the current European heat wave is nothing compared to the baking temperatures in Iraq, where weekend highs are expected to reach 120 degrees.