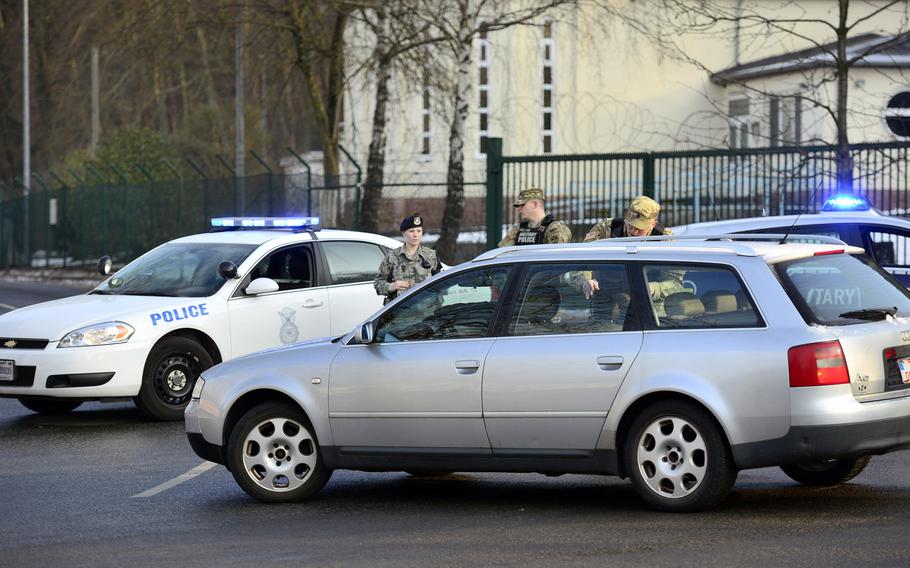 Buy Photo
U.S. Army Military Police and Air Force Security Forces direct traffic away from the gate at Pulaski Barracks in Kaiserslautern, Germany, on Monday, Jan. 23, 2017. The gate was closed for several hours due to a unspecified security incident. (Mike Keller/Stars and Stripes)

KAISERSLAUTERN, Germany — Military officials are continuing to investigate the circumstances surrounding an unattended toolbox found Monday at the vehicle search area on Pulaski Barracks, an incident that prompted the closure of the gates to incoming and outgoing traffic at Pulaski and Kapan for several hours.

A spokesman for U.S. Army Garrison Rheinland-Pfalz said Tuesday an investigation was ongoing to determine ownership of the toolbox and how or why it was left there.

“We take any suspicious or unattended packages very seriously, especially around our access-control points,” Stefan Alford said in a statement. “While the incident was unfortunate and inconvenienced our community with a temporary gate closure, we will always err on the side of safety and security in these matters.”

Alford praised the fast initial actions of the Ponds security team and emergency services responders to cease gate operations, establish a cordon and ensure people were evacuated from the immediate area.

“The response,” he added, “also successfully demonstrated and reinforced the readiness of our procedures with the Air Force to conduct these types of joint emergency operations.”

An Air Force explosive ordnance disposal team from Ramstein cleared the package, making it possible for gate operations to resume before school let out on Monday.

The package scare was the second security incident at the Pulaski Barracks gate in about 10 months. In March of last year, a German man described by police as mentally disturbed gained access to the post twice because a pop-up gate barrier didn’t work. He was apprehended off post after leading police on a car chase. The breach prompted a sweeping review of security measure at 39 installation access points operated by the garrison, and some additional security measures were implemented, officials said at the time.