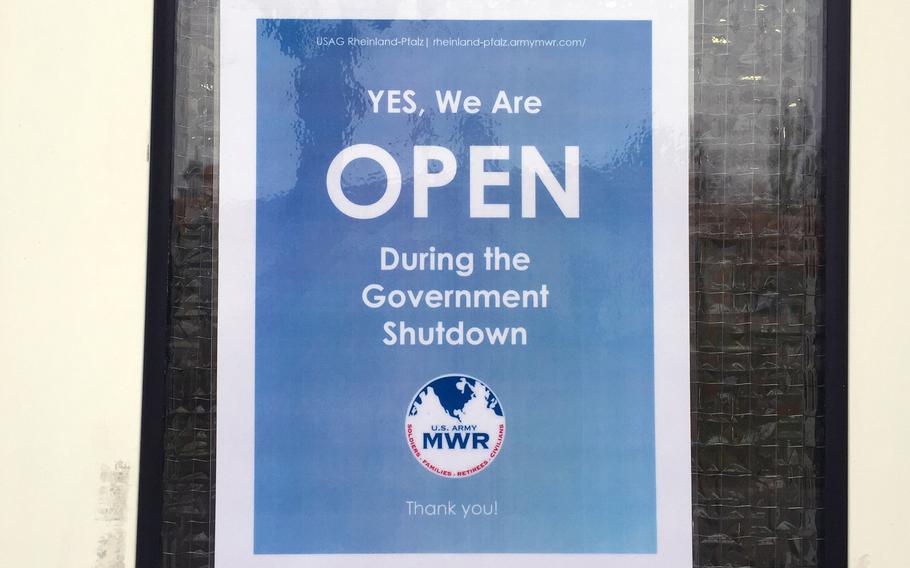 A sign shows an office at Kleber Kaserne in Kaiserslautern, Germany, was open on Friday, Feb. 9, 2018, during the government shutdown. (Michael Abrams/Stars and Stripes)

STUTTGART, Germany — U.S. military facilities across Europe will soon return to business as usual following a brief government shutdown, after lawmakers passed a $400 billion spending bill to reopen the government and President Donald Trump signed the deal into law.

Trump tweeted that he had signed the bill during what was Friday afternoon in Germany.

U.S. Army garrisons across Europe were preparing to send scores of civilian workers home as the House debated the measure. Across Europe, all personnel were required to report for work Friday.

It wasn’t immediately clear Friday how many workers had already departed for the day or were later recalled.

It takes about a day to execute furloughs and many workers were still likely waiting to finalize paperwork as the spending deal was agreed to, U.S. Army Europe spokesman Maj. Mark Miller said Friday.

Excepted employees include those required for national security and safety.

At U.S. Army Europe headquarters, nearly 80 percent of the civilian staff were furloughed during last month’s shutdown, while the rest were deemed essential.

Across the Defense Department, furloughs during the January shutdown affected roughly 50 percent of the 742,000 civilian workforce.

Essential services such as schools, overseas commissaries and mental health counseling remained open during Friday’s shutdown, as will revenue-generating services such as base exchanges and other nonappropriated fund programs.