Military hospitals work together to save anemic baby 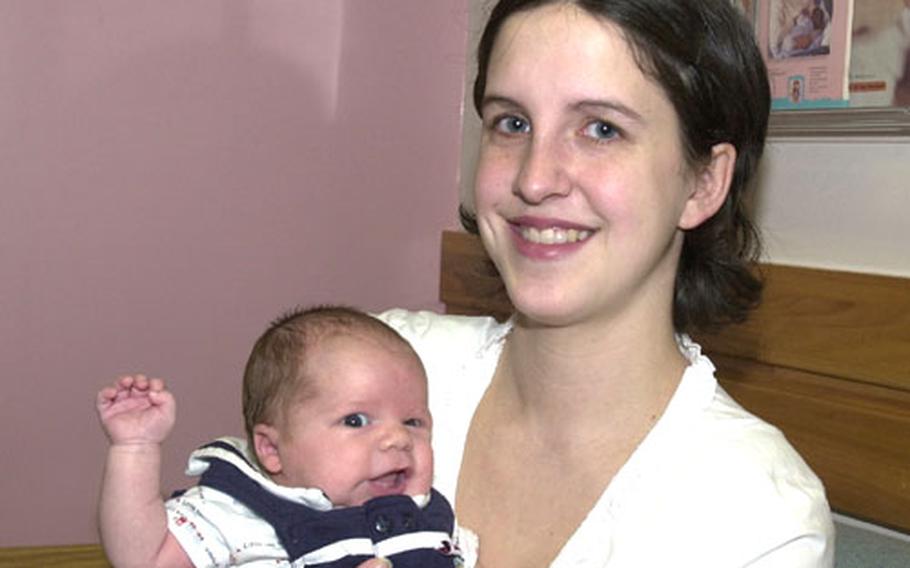 Sarah Schexnider, a military spouse at Misawa Air Base, Japan, holds son Asher, born Dec. 11 with severe anemia. Medical personnel at Misawa&#39;s base hospital pulled together to stabilize the sick baby until he was airlifted to the Neonatal Intensive Care Unit at Camp Lester, Okinawa. (Jennifer H. Svan / S&S)

MISAWA AIR BASE, Japan &#8212; Asher Schexnider was a sick baby.

Born Dec. 11 at the base&#8217;s medical clinic, he entered the world pale and anemic with respiratory problems. He would need critical care, the kind administered by the Neonatal Intensive Care Unit at U.S. Naval Hospital, Camp Lester, Okinawa, &#8212; more than 1,000 miles south of this northern Japan base.

Asher&#8217;s chances of survival depended on two things: How quickly he could be transported to Okinawa, and whether Misawa&#8217;s medical personnel could stabilize him in the precious hours before the medical airlift arrived.

For that, the 25-year-old mother of two says she owes the 35th Medical Operations Squadron&#8217;s Nursery Response Team.

A call for help

Asher was supposed to be a Christmas baby, due Dec. 25. But on Dec. 10, Schexnider, the wife of Airman 1st Class Heath Schexnider, checked into the medical clinic, concerned that her normally active baby hadn&#8217;t moved all day. The obstetrician connected her to a fetal monitor and noticed Asher&#8217;s heartbeat dropped during a slight uterine contraction. He ordered a Pitocin test &#8212; which uses a medication to start or enhance contractions &#8212; and the infant&#8217;s heartbeat &#8220;sometimes would go from 150 to 70&#8221; beats per minute, Schexnider said. The doctor decided to deliver Asher immediately by Caesarean section, worried the baby wouldn&#8217;t survive a normal delivery.

Asher had respiratory distress due to anemia, Bush said. A baby with anemia doesn&#8217;t have enough red blood cells. Red blood cells carry oxygen in the blood and deliver it to the rest of the body.

A team of nurses, physicians and lab, radiology and anesthesiology technicians &#8212; anyone available in the labor and delivery ward &#8212; was quickly mobilized to stabilize Asher in the nursery. Bush was soon on the phone requesting a medical airlift to Camp Lester, Okinawa.

A C-130 from Alaska&#8217;s Elmendorf Air Force Base was at Fukuoka, Japan, in the middle of loading cargo when the crew received the call to divert to Misawa for a medical evacuation, according to a Pacific Air Forces news release.

Back at Misawa&#8217;s hospital, the Nursery Response Team pumped medications, oxygen and blood into Asher as he hovered between life and death.

&#8220;We have a neonatologist at Camp Lester and others who are on the phone with us throughout the entire time while the airplane was coming,&#8221; Bush said. Misawa e-mailed digital chest x-rays of Asher to Camp Lester&#8217;s Neonatal Intensive Care Unit personnel, and &#8220;they&#8217;re able to give us verbal guidance,&#8221; Bush said.

For Misawa&#8217;s nursery team members, caring for Asher was not a new experience.

Military medical airlift is called for in most newborn emergencies.

The C-130 arrived about nine hours after the transport request, having first flown to Okinawa to pick up the NICU team that would care for Asher in-flight. Officials said the mission, from notification to final landing, took less than 14 hours.

Twelve hours &#8212; from when a call is placed to airlift arrival at Misawa &#8212; is the typical turnaround time, Bush said. The plane carried the infant, his parents and a special neonatal transport unit &#8212; in which Asher was placed &#8212; from Misawa to Okinawa in less than five hours.

Asher and his parents stayed on Okinawa for a week and flew back to Misawa commercially.

For the Schexniders, who come from Baton Rouge, La., Misawa is their first military base.