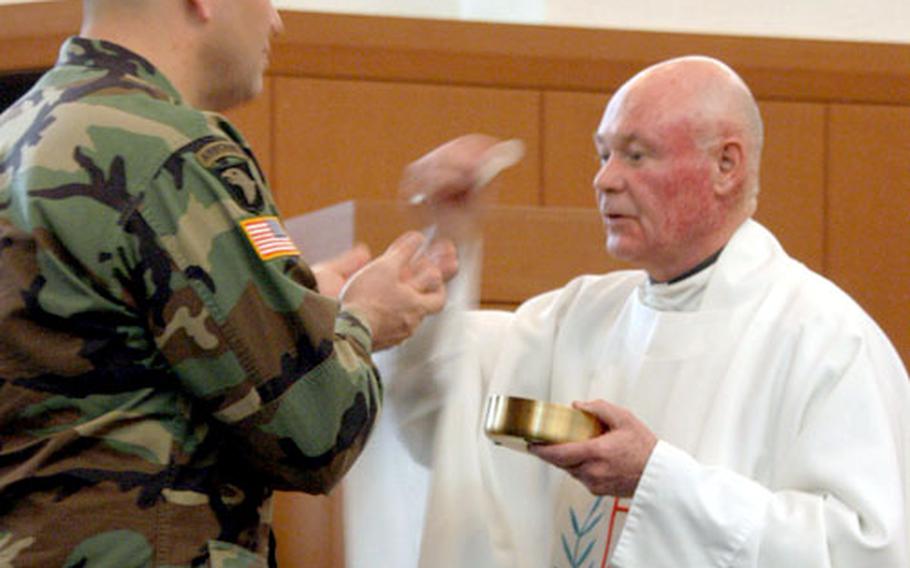 Father Vince Burns gives communion Wednesday to Lt. Mike Rounds, an engineer with the Combined Forces Command at the Memorial Chapel at Yongsan Garrison in Seoul. Burns is a retired Army chaplain who is serving a two-year assignment in Seoul. The Army has a “retired and retained” program that allows religious leaders to come out of retirement to fill the empty chaplain slots in the service. (Teri Weaver / S&S)

Father Vince Burns gives communion Wednesday to Lt. Mike Rounds, an engineer with the Combined Forces Command at the Memorial Chapel at Yongsan Garrison in Seoul. Burns is a retired Army chaplain who is serving a two-year assignment in Seoul. The Army has a “retired and retained” program that allows religious leaders to come out of retirement to fill the empty chaplain slots in the service. (Teri Weaver / S&S) 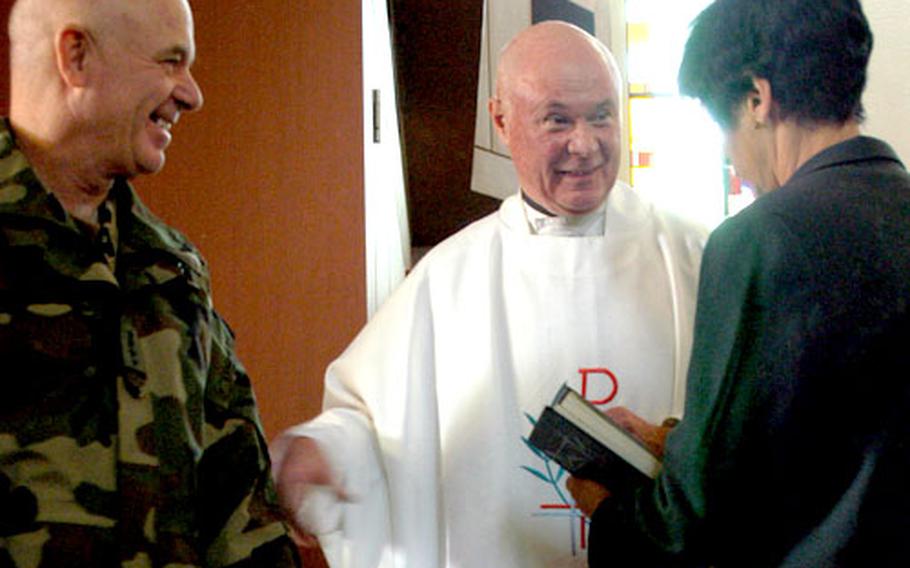 YONGSAN GARRISON, South Korea &#8212; The U.S. Army and its chaplains are helping the Catholic Church recruit priests who could serve in the Pacific theater.

The effort is not altogether new. Military officials are constantly looking for ordained ministers of various faiths to ensure each service branch has enough religious leaders for the men and women stationed throughout the world.

But the need for Catholic priests in the military, and especially in the U.S. Army, has grown so dire that chaplains are reaching out to men who aren&#8217;t even in seminary yet. The idea is to recruit from within the ranks and attract men who might be interested in serving both their God and their country.

&#8220;This is part of the intent, for young men who are wrestling with the call, to reach out to them,&#8221; said Col. Samuel Boone, a Christian Church Disciples of Christ minister and 8th Army command chaplain.

So for the second year, U.S. Forces Korea is holding a three-day retreat &#8212; from Dec. 27 to Dec. 29 &#8212; for men who might be interested in becoming priests. Any man in the Pacific theater, civilian or military, is invited. The chaplains have a small reserve fund to help with travel costs, and they are asking commanders to consider granting &#8220;permissive temporary duty status,&#8221; or free leave, to those who want to attend.

About a quarter of the people in the military are Catholic, according to Boone and Navy Capt. James L. Danner, himself a priest who also serves as the Pacific area command chaplain. Yet there aren&#8217;t enough priests to minister to that many Catholics, Danner said during an interview in Seoul last week.

The military tries to provide one minister for every 1,000 servicemembers of a particular faith. By Danner&#8217;s reckoning, the Navy should have 250 priests to serve Catholic sailors. He expects to have half that many next year.

In the Army, the numbers are worse.

In 1977, there were 260 Catholic priests who served as Army chaplains. Now there about 90, a 65 percent decrease, according to Father Vince Burns, an Army chaplain who is retired but serving full time in Area II, which includes Yongsan and Seoul. Seventeen other priests in the Army also have agreed to work during retirement to address the shortage, Burns said.

Next week, military chaplains are planning a similar session at West Point for Jewish personnel, according to Maj. F. Richard Spencer, a chaplain with the chief of chaplains office in Arlington, Va. There are 12 slots for rabbis within the military, but only four assignments are filled, Danner said.

Boone and Danner both said the recruitment effort meets the military&#8217;s goal of trying to provide religious services while men and women are stationed away from home. The military has chaplains from dozens of dominations and religions, they said, including Christian, Jewish, Muslim and Buddhist, Boone said.

&#8220;So the ACLU is going to come in and say &#8212; separation of church and state?&#8221; Danner lightheartedly asked Boone during a meeting last week while they talked about the upcoming retreat.

About 20 people have expressed interest this year, including two men in Japan, Boone said. Anyone interested in the retreat can call 725-6009 (DSN) or e-mail boones@korea.army.mil.