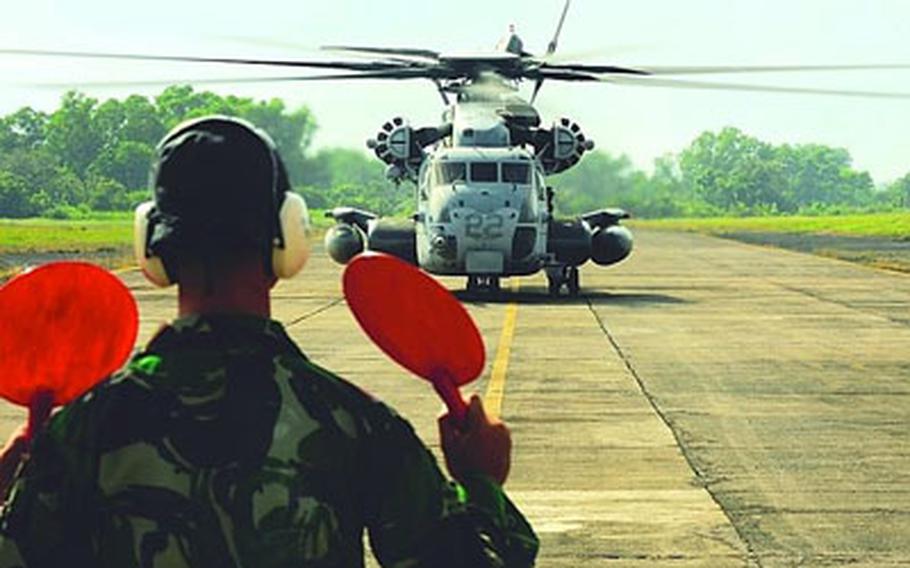 A member of the Indonesian military directs a U.S. CH-53E Super Stallion helicopter across the runway at Tabing Airfield in Padang, Indonesia, on Tuesday. (Aaron Burden/Courtesy of the U.S. Navy)

YOKOSUKA NAVAL BASE, Japan &#8212; The military is wrapping up its efforts in Indonesia and the Philippines after delivering medical assistance and tons of supplies following the natural disasters that struck the Southeast Asian nations.

Most of the joint force operations in Indonesia received orders to de-escalate their efforts and leave the country Wednesday night, Chief Petty Officer Ty Swartz of Amphibious Force 7th Fleet said from Hong Kong on Thursday.

Hundreds of people died and thousands more were displaced by a Sept. 30 earthquake that ravaged Padang city and its nearby areas.

The joint forces delivered about 200 tons of relief supplies, Swartz said. The Air Force also provided a rapid-response field medical facility. Once the military delivered the entire payload it received from governmental and nonprofit relief agencies, it was time to go home, Swartz said.

"We don&#8217;t want to be offensive or obtrusive to the Indonesians," Swartz said.

In the Philippines, civilians and Philippine military forces have taken over the task of relieving a nation devastated by Tropical Storm Ketsana and Typhoon Parma. Working together with Philippine forces, the 31st Marine Expeditionary Unit and other servicemembers delivered nearly 40,000 food packs, 3,000 boxes of clothes and personal care items and 654 cases of water, according Rebecca Thompson, a spokeswoman for the U.S. Embassy in Manila.