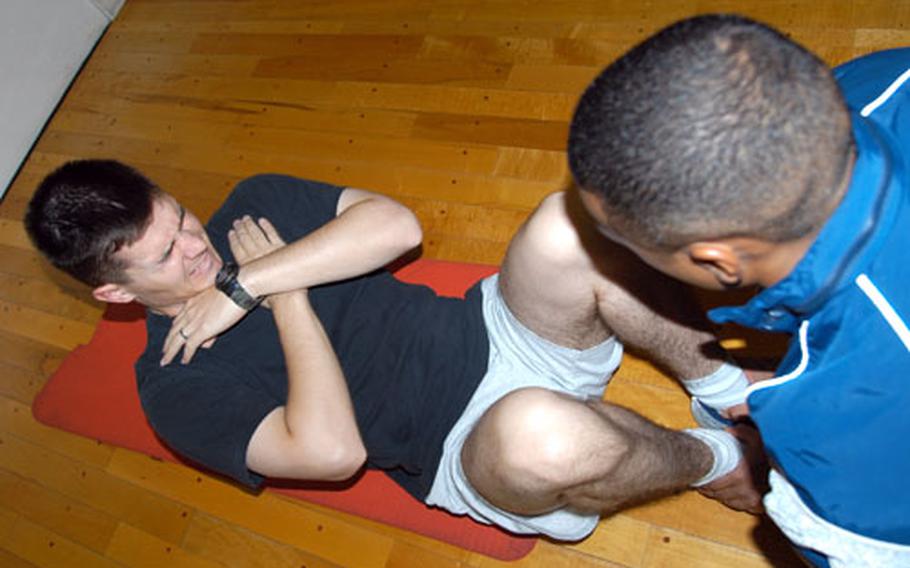 Staff Sgt. Warren Wilson grimaces through sit-ups during his Air Force physical fitness test at Misawa Air Base, Japan. Airmen on their annual test are timed on sit-ups and push-ups for one-minute each and run 1.5 miles. (Jennifer H. Svan / S&S)

Staff Sgt. Warren Wilson grimaces through sit-ups during his Air Force physical fitness test at Misawa Air Base, Japan. Airmen on their annual test are timed on sit-ups and push-ups for one-minute each and run 1.5 miles. (Jennifer H. Svan / S&S) 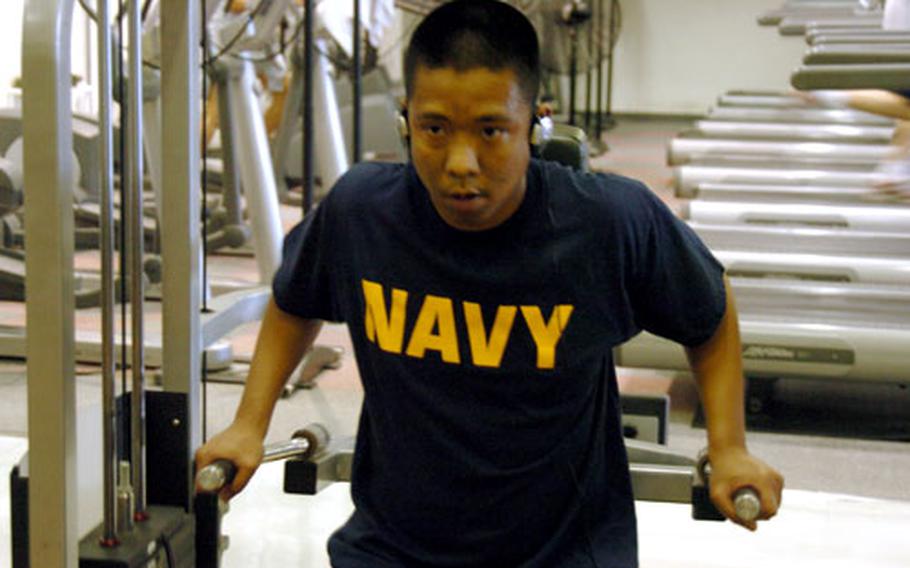 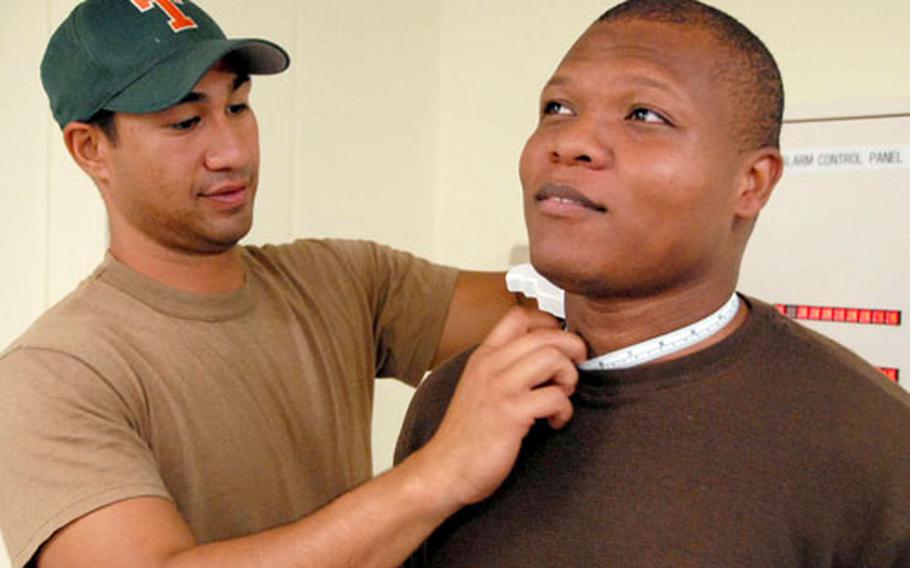 Marines run three miles. Soldiers hit the track for two, and a mile-and-a-half is the standard for sailors and airmen.

When it comes to physical training requirements in the U.S. military, how long and how fast members must move, crunch and flex depends on the uniform they wear.

Each service builds its own fitness program based on general Defense Department guidelines. Training programs must enhance fitness and general health essential to combat readiness, DOD says. And the services must measure aerobic capacity, muscular strength and endurance, and body composition.

Outside those guidelines, each service designs its own fitness program and goals, so long as the standards are based on sound scientific data.

The result is similar testing in some areas. But scoring criteria can vary sharply, as do opinions among troops about whether standards are fair, or even adequate.

The Air Force tends to be viewed as having the most lenient PT program, a reputation left over from the days of the cycle ergometry test. But airmen and the service&#8217;s fitness experts say changes made in 2004 &#8212; including the addition of the 1.5-mile run &#8212; have raised the bar.

The Navy is no place for slackers either, officials say, since it rolled out a tougher fitness policy two years ago that allows commanders to kick out sailors who fail three semiannual fitness tests in four years.

While the Air Force and Navy have beefed up standards, some airmen and sailors say they should be even tougher in today&#8217;s joint combat environment.

Some soldiers, meanwhile, question whether the Army&#8217;s program has become less rigid in a time of war to keep much-needed bodies, however soft, in uniform.

No one seems to argue that the Marine Corps&#8217; standards are the toughest, a perception fueled by the three-mile run and the pull-up requirement for men and flexed-arm hang for women.

&#8220;Every Marine must be physically fit, regardless of age, grade or duty assignment,&#8221; said Sgt. Maj. William F. Fitzgerald, Headquarters and Service Battalion, on Camp Foster.

That hasn&#8217;t changed since the war on terrorism began, Fitzgerald said.

Several differences set the Corps&#8217; fitness program apart from those of the other services. The most obvious is the three-mile run, the longest of all the services.

Unlike members of the other services, Marines don&#8217;t have other cardiovascular test options such as the walk, swim or bike to fall back on if an injury or medical condition prevents them from performing high-impact activities.

While there is no policy stating how long a Marine can be medically waived from doing the run before being submitted for separation, a Marine cannot be excused for two consecutive physical fitness tests for the same injury, such as the same ankle sprain, said Staff Sgt. Christina Delai, a Marine Corps spokeswoman at the Pentagon.

Marines are required to complete a fitness test semi-annually. The test has three events. Besides the run, Marines have a two-minute limit for sit-ups, followed by pull-ups for men and the flex-armed hang for women. Each event is worth up to 100 points.

Marines must pass a minimum score in each event. They may be denied promotion, re-enlistment and access to special schools until they pass. Marines who fail twice can be administratively discharged, with the decision to retain or separate left up to one&#8217;s commander, officials said.

NavyThe stakes for staying fit in the Navy are as high as ever for sailors, who can be kicked out of the service if they fail three fitness tests in four years, said Chief Petty Officer Wilson Basilio, who heads fitness testing at Sasebo Naval Base in Japan.

The Navy tests its sailors twice yearly. Points are awarded for the number of sit-ups and push-ups, each done in two minutes, and the time on a 1.5-mile run.

First, sailors are weighed and their height measured. Those who are heavy for their height are measured around the neck and waist to determine body composition. A neck or waist that is an inch or two too big can mean failure.

Sailors who skirt the cutoff point sometimes come back days later for a second weigh-in, hoping to have shed a couple of pounds. But Basilio warns them that fitness is an ongoing process and can&#8217;t be attained at the last moment.

Lt. Kurt Johnson, who passed his weigh-in last month at Sasebo, thinks the Navy&#8217;s standards are less grueling than those of the other services but appropriate.

&#8220;I would not say they are overly strict like the Marine Corps because the mission is different,&#8221; he said.

ArmyFirst Sgt. Terence Woodliff, of the Army&#8217;s 362nd Signal Company at Camp Coiner, South Korea, said he thinks it&#8217;s harder to get booted from the Army for fitness deficiencies since the war on terrorism began.

The Army&#8217;s semiannual fitness test consists of two minutes of push-ups, two minutes of sit-ups and a two-mile run. Each event is graded on a scale from 0 to 100 points. The minimum passing score is 180 points, with a minimum score of 60 points in each event.

Woodliff said failing a test used to get a soldier removed from the Warrior Leader Course, a requirement for any soldier who wants to become a sergeant. Now, he said, it just shows negatively on paperwork.

Some soldiers receive a permanent medical profile, which means they cannot perform certain actions but are still fit for further service, according to Maj. Thomas McCuin, an Army spokesman at the Pentagon. One common reason is knee injuries. Those soldiers, as well as those on temporary medical profiles for more than three months, are permitted to complete one of several alternate cardiovascular tests.

Air ForceUnlike the other services, the Air Force requires only an annual fitness test, though some squadrons opt to test more often.

The test consists of a 1.5-mile run, timed push-ups and sit-ups for one minute each, and the abdominal circumference measurement.

Height, weight and body composition are measured but not used as a penalty. A low body-mass index can be used in lieu of the abdominal circumference.

&#8220;Some who would have maxed out on the abdominal circumference scores still have a low BMI,&#8221; said Maj. James Stryd, the former Health Promotion Flight commander at Misawa Air Base, Japan.

Airmen say they see more of an emphasis on fitness in the Air Force since &#8220;Fit to Fight&#8221; was rolled out several years ago.

Simmons said it took her a long time to get back into shape after giving birth to her son almost three years ago. She thinks the standards are fair, but as a single parent she finds it difficult to find the time needed to work out as much as she&#8217;d like.

Some airmen think the Air Force needs to step up its PT program even more to keep up with the Army and Marines when deployed downrange.

&#8220;Now that the Air Force is considered warriors, there may be a need for all of us to have more training,&#8221; said Chief Master Sgt. Michael Atkinson, 46, 35th Maintenance Squadron superintendent.

&#182; Try to squeeze in quick workouts of push-ups, pull-ups, sit-ups or one- to two-mile runs.&#182; You can do push-ups or pull-ups throughout the day every so often when there&#8217;s not enough time to hit the gym for an hour.

&#182; Stay flexible and stretch throughout the day.&#182; Know when to rest. Too many injuries occur from overtraining.

&#182; Your body needs to work to get stronger, but it also needs sleep, rest days and healthful food.

When transitioning from upper-body work to aerobics during the fitness test, try this to avoid feeling breathless at your target pace during the run:&#182; Take time in between the upper-body exercises to stretch arms, chest, shoulders, stomach and lower back.&#182; Run for about two to three minutes at an easy pace to get the blood down to your legs.&#182; Take about three to five minutes to stretch your legs.&#182; Shake arms to loosen up.

Stew Smith, author of fitness books and articles, is on the Web at www.stewsmith.com

Components of each service&#8217;s physical fitness and testing programs:

The minimum scoresThese are the minimum scores men and women must meet to pass military fitness tests, according to information from the Marine Corps, Army, Navy and Air Force. The scores are for select age groups. (Each military component separates age brackets differently.)

(Note: Fitness level is determined by adding points for aerobic fitness, body composition, push-ups, and sit-ups, with no minimum passing standard for each. Air Force members must score at least 75 points to pass.) The minimum passing score requires:Men45 to 47 push-ups in one minute.42 to 43 sit-ups in one minute.Maximum 35-inch abdominal circumference.1.5-mile run in 12:55 to 13:36.

Married couple finds many ways to stay in good condition together

We asked: Should physical fitness standards be the same for all servicemembers?