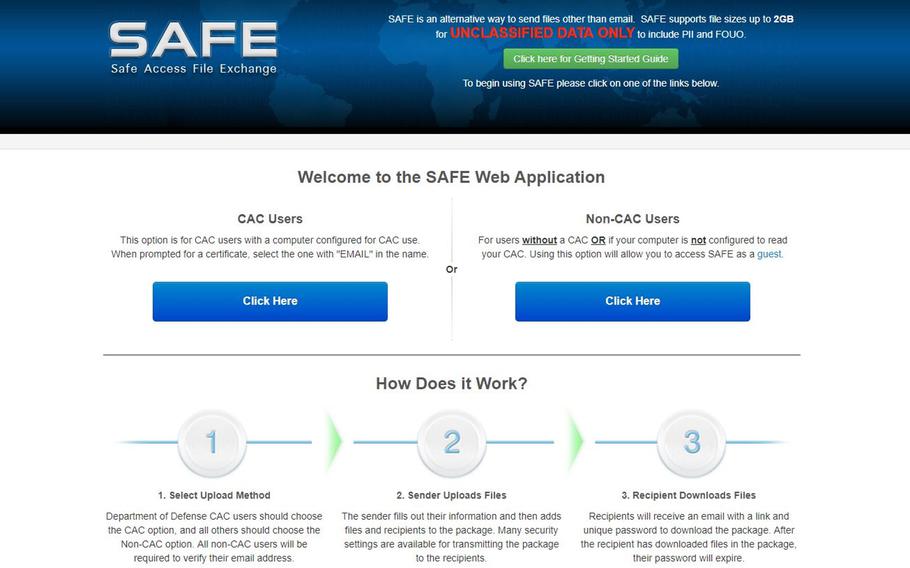 The homepage of the Army's Safe Access File Exchange application. The file-sharing site brought back online in February 13 after being shuttered over security concerns since November. (Sreenshot)

The Army disabled the Aviation and Missile Research, Development and Engineering Center Safe Access File Exchange, or AMRDEC SAFE, on Nov. 1 as a preventive measure after unnamed “government-internal agencies” discovered potential security risks. It was brought back online Feb. 13, an official with the center said via email late Monday.

Despite the command’s name change, the site was brought back online at its previous location safe.amrdec.army.mil after receiving approval from multiple DOD agencies, Crum said. In the coming months, however, the center will not be the owner or maintainer of the site, she said.

“Senior leadership has determined that an agency with more capabilities than exist at CCDC Aviation & Missile Center will take over sustainment and maintenance of the site later this year,” Crum said. She could not immediately disclose which agency will assume ownership of the site.

The missile research center, based at Redstone Arsenal in Huntsville, Ala., had not developed the site to be used by the defense community at-large, she said, however, officials have said it saw widespread use because of its capacity and security level.

Via AMRDEC SAFE, users could send messages containing up to 25 documents or 2 gigabytes to military, government or civilian email addresses. That’s significantly more than encrypted email, which is also approved for sending personal and medical information but is limited to 10 megabytes and can’t be sent to all email recipients.

Originally developed to allow the center to exchange large data files with its civilian industry partners, AMRDEC SAFE was unofficially adopted by many in the military and government because it was one of the only ways to transfer large files containing unclassified but sensitive official information, such as personnel and medical records.

In the wake of the AMRDEC SAFE closure last year, the Navy and Marine Corps issued official guidance saying optical discs such as CDs and DVDs were the only remaining way to securely send files containing private information like Social Security numbers or medical data that could not be sent via encrypted email. Both services in December were exploring the possible use of Defense Information Systems Agency solutions to bridge the capability gap created by the closure of AMRDEC SAFE.

Air Force and Army officials also said they lacked an online alternative to the site, and officials at the main military hospital in Germany said they were sending large files via fax or on optical discs via registered mail if they were too big to be sent via encrypted email.

Some other military file-sharing sites allow for distributing sensitive or protected unclassified materials that do not contain personally identifiable or private health information, such as the Army Research Laboratory’s SAFE site (https://safe.arl.army.mil/), which allows 2-gigabyte files.

Since it’s been restored, AMRDEC SAFE remains available to both users with and without Common Access Cards, though only users with CACs can send files to civilian email addresses. Files are now only available for 48 hours, instead of a previous 15-day window, Crum said.

On the social media platform Reddit, some users welcomed the return of the file-sharing site. A couple said that the security features of their encrypted email often erroneously flagged ordinary nine-digit figures like contract numbers as potential Social Security numbers, blocking them from being sent to users without encrypted email.

“You don’t have to transfer files by burning to DVD and mailing across the country anymore,” said one user, though he added cautiously: “No idea how long it’ll last this time.”