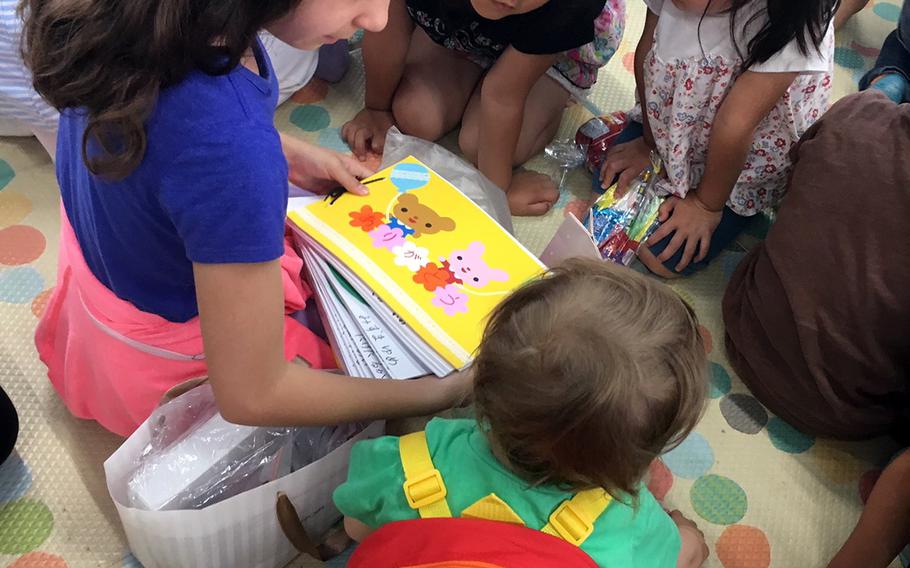 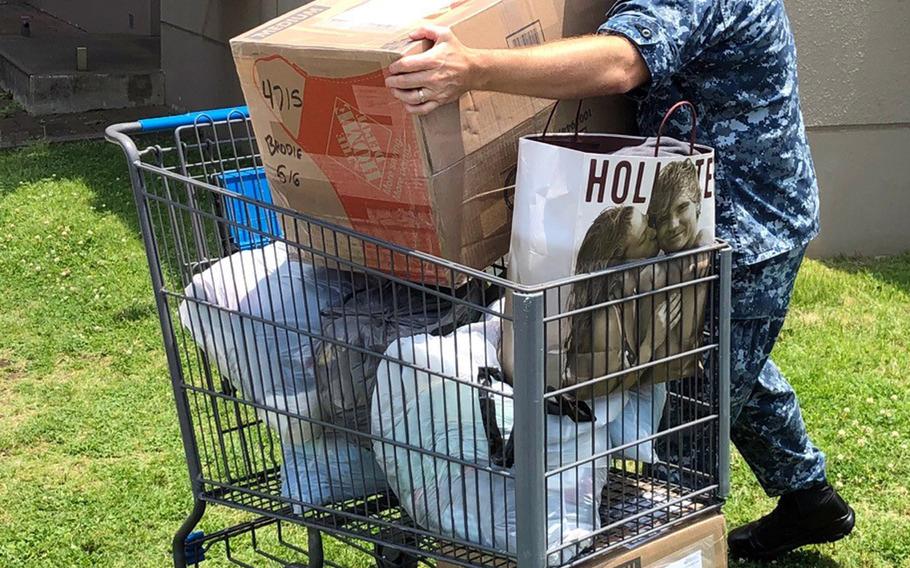 Ben Krug loads a sack of donated clothing into a van headed to help Japan earthqauke and tsunami victims, Tuesday, June 25, 2019, at Yokosuka Naval Base, Japan. (Caitlin Doornbos/Stars and Stripes)

YOKOSUKA NAVAL BASE, Japan — On a recent humid Tuesday morning, Masako Sullivan and several military families loaded bag after bag of donated children’s clothing into a van she’d rented from base.

They’ve been doing this annually for eight years, now.

The donations were headed to the cities of Fukushima and Ishinomaki, in the northeastern Japanese prefectures of Fukushima and Miyagi, the scenes of a 9.0 magnitude earthquake, tsunami and nuclear power-plant meltdown in March 2011.

Sullivan started Helping Hands for Tohoku — an annual donation drive and delivery named for the region where the triple disaster occurred — about a month later and keeps it going though she moved to the United States in 2012.

Nearly a decade after the disaster, victims continue rebuilding their lives in Tohoku, and Helping Hands is still involved. Many of the American volunteers have moved on to other posts around the world while others are back on their second or third tours in Japan. The continuing recovery in Tohoku brings them together despite the many moves that come with military life.

Immediately after the disaster, Navy families in Yokosuka wanted to help but didn’t know how. The language barrier was challenging for most, Sullivan said, so the Japan native created Helping Hands and acted as liaison between the base community and local shelters for victims.

“We collected and delivered tons of donations to shelters in Yokohama and Kawasaki every week,” Sullivan said. “We saw the evacuees smile and laugh every time Navy families visited them with donations and home-baked goods.”

While weekly donations are not necessary eight years later, a great need still exists. Navy spouse Alli Krug is one of the newest volunteers, and on Tuesday brought boxes of clothing, shoes and athletic gear donated by her son’s ice hockey team. Krug said the need is still critical years after the tsunami that killed 19,000.

“People may think they have been forgotten and the world has moved on, but when you lose your father or husband, you’re always rebuilding,” Krug said. “It’s really nice to have a way to help in a real, tangible way with my children.”

As Sullivan reached Fukushima with the donations Wednesday, she said she saw abandoned houses and radiation levels as high as 2.62 millisieverts in some areas — the amount of radiation the average American is exposed to over the course of a little more than four months, according to the National Council on Radiation Protection and Measurements.

She and other volunteers dropped off food, toys, books and about 400 pieces of children’s clothes to preschools and day care centers in the disaster region. She said the children’s parents requested donations to help with the expense of keeping growing children clothed. Many families continue to struggle financially as they rebuild.

The children, all younger than 5 years old, were born after the triple disaster and represent a new hope growing in the region that’s still fearful of drinking tap water for fear of radiation.

“They still buy water for the children to drink even though the tap water has been tested because they don’t want to take any possible risk,” Sullivan said.

On its website, one of the day cares Sullivan visited thanked Helping Hands for its continued support, adding that they were “looking forward to seeing them again.”

Sullivan called it a miracle that Helping Hands continues with longtime and new volunteers nearly a decade since its start.

Two years after launching Helping Hands, the family relocated to the U.S. when Sullivan’s husband, Collin Sullivan, who was then the executive officer on the USS Mustin, was given orders to Naval Base San Diego. The Sullivans moved once more to the San Francisco area after Collin Sullivan retired, but all along made it a family tradition to fly from California to Yokosuka each summer to deliver donations with her three young children.

Cmdr. Robert Brodie, executive officer of Fleet Coordinating Group in Yokosuka, and his wife, Michele Brodie, were in Yokosuka when the 2011 disaster struck. Brodie said they started volunteering soon after, with his wife sending homemade brownies to shelters in Kawasaki.

They later moved to Singapore but started with Helping Hands again a few years ago when they returned for Brodie’s new Yokosuka billet, he said. This year, they used their on-base apartment as a donation collection point.

Sullivan said other military families who have moved on to new postings back in the U.S. continue to send boxes of donations across the Pacific to Yokosuka families volunteering with the charity.

“Wherever they move, they are planting a seed for Helping Hands for Tohoku,” she said.

Sullivan said Helping Hands has helped build bridges between the U.S. and Japan, contributing to the important alliance between the two countries in a grassroots way.

“It’s not just about helping with donations, but sharing friendships,” she said.