Military experts, leaders say 'up or out' promotion system outdated 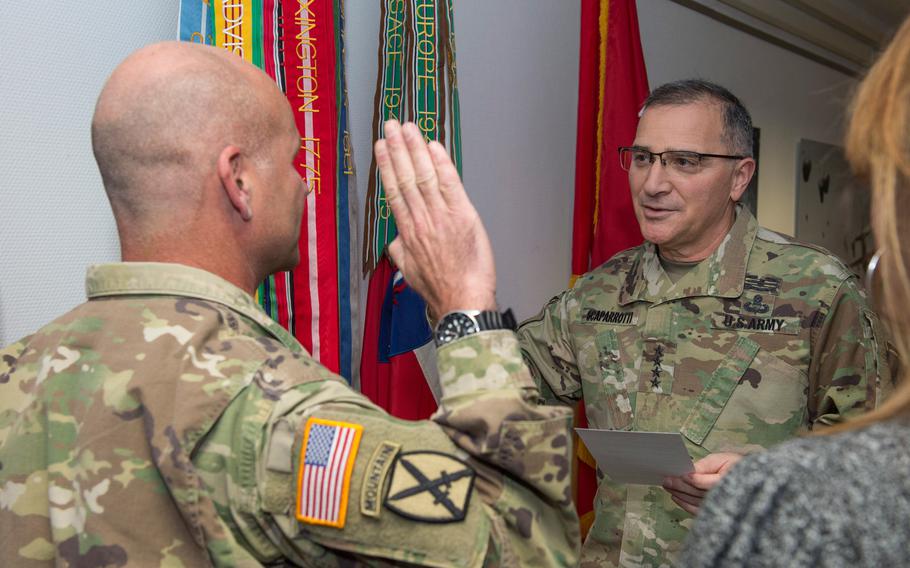 WASHINGTON — A panel of military experts and leaders urged lawmakers on Wednesday to revamp a woefully outdated officer promotion system that has plagued recruiting and retention efforts.

The system, born of a 1980 law called the Defense Officer Personnel Management Act, standardized military promotions and established an “up or out” career path for servicemembers.

Experts testifying before a subpanel of the Senate Armed Services Committee seem to agree that the policy, also known as DOPMA, is an one-size-fits-all approach that the military has outgrown.

“The bureaucracy still treats troops like interchangeable draftees. It’s not only disrespectful but short-sighted and this can’t be fixed until DOPMA is fixed,” Timothy Kane, a Hoover Institution fellow at Stanford University, said during testimony to the subpanel. “Our enlistees and our officers are fantastic, but how they get treated is not so fantastic. That’s why we have repeatedly a retention crisis.”

The comments before the Senate Armed Services subcommittee on personnel issues marked a far-reaching discussion on military personnel practices that could influence the development of this year’s National Defense Authorization Act.

Military leaders at the hearing said they are facing a more competitive job market now and need to offer more to recruit and retain servicemembers, especially ones with specialty skills. Life-work balance must become a bigger priority, military leaders and experts agreed.

“We are in a war for talent. The propensity to serve is declining amidst an improving economy and it’s adversely impacting both recruiting and retention,” said Navy Vice Adm. Robert P. Burke, deputy chief of naval operations. “Sailors leaving the Navy continue to express frustration with the industrial-age personnel systems and inflexible and complex personnel processes.”

Lawmakers seem to agree that the military’s personnel management law needs to be updated. The current system limits the military’s ability to respond quickly to unforeseen threats, restricts rapid changes to force levels due to budget demands and doesn’t allow the services to differentiate among themselves, said Sen. Thom Tillis, R-N.C., chairman of the subpanel.

“DOPMA’s authors never envisioned the post-Cold War military as presently constructed. Today’s force is 43 percent smaller than the military of 1980, and is constantly engaged in ways never predicted during the Cold War,” Tillis said. “Repeated overseas combat deployments strain the more traditional warfighting career fields, while at the same time new military domains require entirely different officer skill sets. We must ask ourselves, can a personnel system designed for an industrial-age military be successful in the information age?”

For example, commanders don’t have hiring and firing power that they need and can’t eject an abusive coworker. This, in turn, feeds into a system that could inadvertently protect sexual predators, who are more difficult to remove. The military struggles with this concern, seeing 10 times the level of sexual assault among its ranks when compared to the civilian population, Kane noted.

“This system lets them hide in plain sight,” he said.

As a result, the services have lost sight of their focus on excellence and a personnel gap has developed between servicemembers with 12 years in the military and those with 20 years, Kane added.

“The historical military principle for most of our history has been excellence or out,” he said. “But we don’t do that anymore. It doesn’t matter how excellent or un-excellent you are, you are pretty much guaranteed promotion pretty much all the way to 20 years.”

In one example, Kane said an airman serving after the 9/11 terrorist attacks was forced out of the service for not getting a promotion. The servicemember had to seek a third master’s degree to stay in the Air Force, and he refused.

Kane said lawmakers can remove language requiring servicemembers to be promoted twice, which forced the airman to leave.

“That’s the kind of nonsense that happens when people can’t control their own careers,” he said. “One thing to change in DOPMA is you do not have to retire after you have failed to promote twice… that’s what you can fix with a sentence.”

Military experts and leaders from each of the services testified they need more flexibility to allow servicemembers to follow their own career paths.