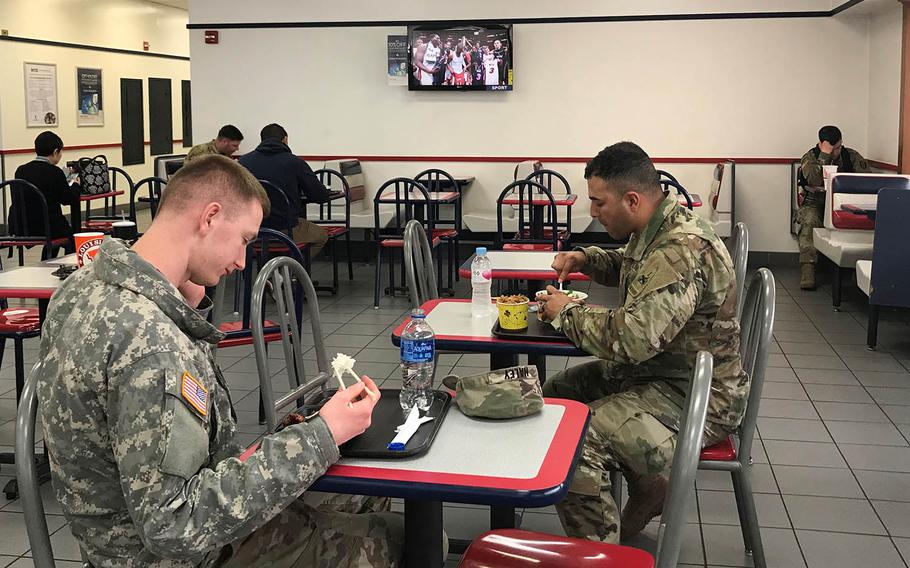 Soldiers hoping to catch up on the news while eating lunch on Wednesday were out of luck unless they had cell phones at hand.

Televisions in military food courts, customer service centers, malls and other common areas will no longer show news channels “due to their divisive political nature,” according to the agency that oversees retail services.

TVs mounted on walls in food courts and other areas on bases around the world frequently show a loop of news channels including Fox, CNN and MSNBC.

The Army and Air Force Exchange Service, headquartered in Dallas, sent a memo to facility managers on Monday with the subject line: “Change in TV policy.”

“The Exchange has elected to play sports channels/sports programming on all common area TVs” when its own informational service known as EXTV isn’t being shown, the memo said.

“As a federal entity, we remain neutral on political issues. News channels should not be shown on common area TVs due to their divisive political nature,” it added.

When asked to elaborate, an exchange spokesman said only that the agency provides general guidance concerning store operations to include television programming in its facilities.

“Providing store guidance regarding operations is an ordinary course of action for the Exchange,” Chris Ward, senior public affairs manager for AAFES, told Stars and Stripes in an email.

That guidance “includes the flexibility to make adjustments based on the news of the day and local needs,” he said.

Soldiers had mixed reactions to the decision.

The El Paso, Texas, native said he doesn’t like having to watch CNN due to what he sees as its bias against President Donald Trump, and he imagines people on the other side of the political spectrum probably feel the same way when Fox News comes on.

“I don’t really want to see people bash our president,” he said. “For one, I don’t want to watch what I don’t agree with, let alone play it on a military base. I just think politics should stay out of the work environment.”

Staff Sgt. Manuel Cardona, who is based on Camp Humphreys with the 123rd Brigade Support Battalion, didn’t like the decision. He said the news broadcasts are often his only chance to catch headlines during his busy work day.

“I think it’s informative. I don’t have a TV,” the 34-year-old Miami native said. “I think we’re getting too … sensitive about these things.”