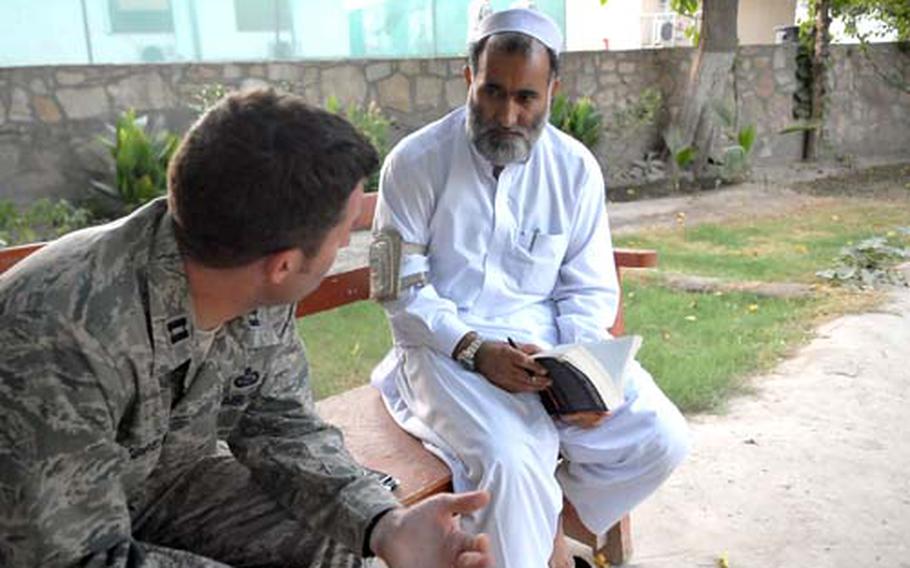 Engineer Ghaffar signs a copy of the book "Ghost Wars" during a visit to a U.S. base in Jalalabad. Ghaffar, whose exploits in firing the first CIA-supplied Singer missiles at Soviet helicopters were immortalized in the book, says his fighting days are over. Here, he talks with U.S. Air Force Capt. John Morath, a fellow Russian speaker. (Michael Gisick / S&S)

JALALABAD, Afghanistan &#8212; Engineer Ghaffar is an unimposing man in his mid-50s now, his face framed softly by a neat beard gone mostly gray. But there is still a bounce in his step as he pads away from an American base near his home in Jalalabad.

It is not far from here, he says, gesturing through an orchard surrounded by chain-link and razor wire, to the airport where he and his two colleagues fielded the first Stinger missiles used in Afghanistan that day in September 1986.

"That was a very good day," Ghaffar remembers, smiling. "We were very, very happy. The helicopters were a big problem for us."

By many accounts, the Stingers changed the course of the war against the Soviets, giving the mujahedeen an effective weapon against the deadly gunships from which they had no other defense. Even at the outset, the potential impact of the American missiles was lost on no one: the CIA outfitted Ghaffar and his small team with a video camera to record the event.

According to "Ghost Wars," the video captured Ghaffar and his men shouting "Allahu Akbar!" as they unloaded on the Soviet helicopters.

By the time Ghaffar had hit the third gunship, a CIA agent quoted in "Ghost Wars" said, the video "looked like some kid at a football game.

A copy of the tape made its way to the White House, where it was screened by President Ronald Reagan. A version of the event was also memorialized in the movie "Charlie Wilson&#8217;s War," though as Ghaffar points out now, "It wasn&#8217;t really me in the movie."

After destroying the helicopters, Ghaffar says, he and his men spent "four hours running through the mountains." The war against the Soviets continued for more than two years. Then came more years of fighting against the Soviet-backed Afghan government. Ghaffar was kidnapped and imprisoned by rival mujahedeen in 1990, according to reports. Then came the civil war and, later, the Taliban, and Ghaffar left for Pakistan.

He re-emerged in 2001, when he led anti-Taliban fighters into the Tora Bora Mountains in the hunt for Osama bin Laden. He later served as mayor of Jalalabad, but was sacked by President Hamid Karzai in late 2002 as part of a purge of officials seen as loyal to the hard-line mujahedeen commander Gulbaddin Hekmatyar, though Ghaffar maintained then as now that he had no such loyalty.

"I have not seen Hekmatyar in a long time," he says. The two last spoke in 2001 as Ghaffar prepared to return to Afghanistan, but Ghaffar says he and Hakmatyar were going in different directions and had not had close relations for years. Hekmatyar, who is believed to direct attacks against NATO and Afghan forces from Pakistan, remains among the highest of American "high-value targets." Suffice it to say, he would not be a welcome guest on any U.S. base.

These days, Ghaffar tends to a few "very small" business interests and serves as a regional representative for Hezb-e Islami &#8212; Afghanistan, the Afghan Islamic Party, which was formed as a nonviolent alternative to Hekmatyar&#8217;s so-called Hezb-e Islami &#8212; Gulbaddin, or "HiG" in American parlance.

There are rumors of attempts by Ghaffar&#8217;s party to lure Hekmatyar away from fighting, but Ghaffar downplays these, joking that given Hekmatyar&#8217;s history of shifting, self-interested loyalties, the Americans "should just offer him money, and he might stop fighting."

Ghaffar&#8217;s own relationship with the Americans has not been without uncomfortable moments. He says a U.S. commander once visited him and accused him of knowing bin Laden&#8217;s whereabouts.

Ghaffar says he is happy with the way things are going in Afghanistan, though like many Afghans, he warns that civilian casualties from U.S. airstrikes are beginning to take a serious toll on public opinion. And perhaps not surprisingly, given his history with Karzai, he says the Afghan government remains "very weak."

But Ghaffar, who was trained as a military engineer by the Russians, has struck up a friendship with a Russian-speaking U.S. intelligence officer, Air Force Capt. John Morash, and his own relationship with the Americans has improved. He was recently the guest of honor at the U.S. base for a screening of "Charlie Wilson&#8217;s War," which he hadn&#8217;t seen.

Walking through the base, he reminds the American officer that he still hasn&#8217;t received his promised copy of the movie.

"Nobody in town has seen it," he says. And no one, he adds, will ever see him fighting again in real life. "I was very happy in those days to be fighting for my nation against the Russians," he says. "But now I am happy to be at peace."